Who's afraid of the big, bad gray wolf? 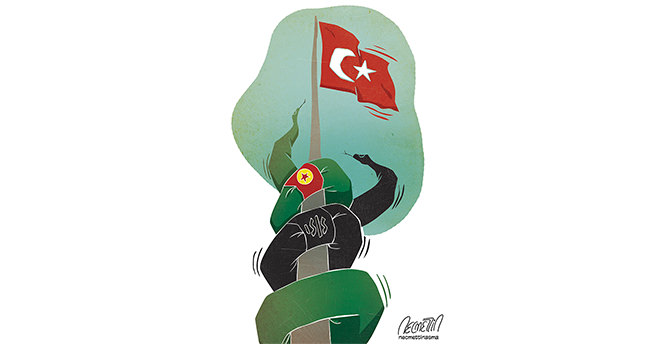 The continuing global failure to stop terrorism leaves Turkey alone to face terrorist organizations ISIS and the PKK, used as a puppet by others for political gains to shape the region

The famous Disney song "Who's Afraid of the Big, Bad Wolf" is an iconic symbol of American musical culture. Lead lyricist Frank Churchill coined the phrase in 1933, which has come to signify something much more than its original composition intended. Actually, in popular culture, the phrase is often used as a euphemism for arrogant disregard for superior power, false bravado in the face of imminent trouncing or bombastic rhetoric masking our fears for something we do not understand. The latter, in particular, is quaintly apt concerning Turkey's war against the PKK and Islamic State of Iraq and al-Sham (ISIS), which are both labeled terrorist organizations by the Organization of Islamic Countries (OIC), the U.N., NATO and the EU. It is fitting, since even with that clear-cut denunciation, there is a menacing, misrepresentation of Turkey in popular media as unjust, overbearing and unscrupulous - in other words as a scary, "gray wolf" that will huff and puff and blow your house down. In essence, Turkey is caught mercilessly between a "damned if you do, damned if you don't" conundrum, even concerning agreed upon terrorists.

Wolves have a merciless reputation in European and North American folklore. They are frightening and formidable and their presence inspires loathing and dread. It does not matter if one is talking about "The Boy Who Cried Wolf," "The Wolf and the Seven Young Kids," "Peter and the Wolf," "The Three Little Pigs" or "Little Red Riding Hood," wolves are depicted as the enemy that we fear. For that reason, the phrase "big, bad wolf" is used as a metaphor for the fear we carry within ourselves. At times, it is a fear of solitude, for children it may be the fear of darkness, or for the elderly a fear of death. Regardless, the phrase is symbolic of the things we fear, and a resurgent and confident Turkey is exacerbating those fears in others.

Admittedly, Turkey has taken a decisive step to eliminate serious extremist threats posed to it, the region and the world, but this is no about-face. Turkey was among the first countries in the world that categorically declared ISIS a terror threat, and even allowed Iraqi Kurdistan peshmerga forces to travel through its territory to defend Kobani, Syria. Notwithstanding, what is especially conspicuous is its explicit lack of international support. On the contrary, Turkey is being heavily knocked for the manner it is targeting these terrorists. From the critical Arab League statement by Nabil -Elaraby, the despondent statement by German Minister of Defense Ursula Von Der Leyen, Russia's phony appraisal cautioning the use of force as if the world was blind to Ukraine, to Belgium officially inviting Peoples' Democratic Party (HDP) Co-Chair Selahattin Demirtaş to Brussels and hosting senior PKK figures. And, as if that were not enough, numerous Iranian magazines, journals and newspapers laughably arguing that Turkey really supports ISIS - there seems to be more caution than joy at Turkey's resolve. No wonder there is increasing resentment in Ankara of this perceived resistance to Turkish tenacity.

Yet, what lies behind this lack of both regional and international wide-scale support? Firstly, it exposes the deep racist undertones or double standards applied in confronting global terrorism. If Europe, the U.S. or even Russia claims to oppose global terror, then in line with the white savior complex - they alone presume to have the moral authority to do so. Not Turkey's, certainly not Pakistan's, nor non-Western European efforts matter. Secondly, both ISIS and the PKK are proxies being used by others for their political gains - there is a world of difference between their stated aims and their actual ones. In regards to ISIS, its economic relationship with the brutal Syrian dictatorship has already been well-documented and researched. Moreover, there have been no serious battles between ISIS and Syrian President Bashar Assad's hegemony and, in fact, they have cooperated with each other on countless occasions. Concerning the PKK, Turkey under the Justice and Development Party (AK Party) has bent over backward to reach out, rightfully so, to its Kurdish population. This too, with considerable success more than anything has petrified the PKK. They alone want to hijack the Kurds into toeing their line, but that has failed miserably, for they are no longer seen as representative of Kurds en masse.

Actually, the PKK has done everything in its power to annul the peace initiatives, even by ignoring the orders of imprisoned PKK leader, Abdullah Öcalan, to disarm. Thirdly, this military campaign essentially aims to deal a final blow to the Syrian monstrosity and checkmate Iranian plans for the region, which is why President Hassan Rouhani of Iran agitatedly called President Recep Tayyip Erdoğan. Establishing a secure, free zone inside Syria will allow Syrians to be housed inside Syria and for aid to begin to flow directly to that region, further rendering the Syrian regime redundant. Fourthly, the nature of extremism is that it opposes moderates more than their avowed enemies and is the antithesis of what it portends to be. Turkey's moderation is what is most frightening and worrisome for as diverse a group as Arab or Turkish secularists, nationalist bigots, conservative dictators and ethnic chauvinists, all of whom oppose representative leadership. And, of course, that moderation is opposed by extremist groups like ISIS and the PKK who, by Turkey building a multi-ethnic nation and granting people the right to choose a faith-based lifestyle, are enraged due to their enforced secularism or cheap ethno-nationalism.

Turkey's democratic credentials are clear. It has allowed a political party - the HDP - with established links to a terror organization - the PKK - to enter its political space. But those who wish to poison Turkish-Kurdish relations have squandered that opportunity. ISIS is doing the bidding of the Syrian regime, in fact, is an outgrowth of the global failure to confront the venomous Assad regime. Both terror organizations need to have their military wings clipped since their ideologies go nowhere. The international community should unequivocally and more compellingly work together with Turkey to end this terror threat. The wider Middle East is being damned to perpetual violence, which drains its creative, intellectual potential and is being done by those who wish to ensure the continuation of the client-patron status quo. But that configuration is no longer workable and partnerships based on compromise and mutual consultations are in order.