Has Turkey turned back to the ‘90s? 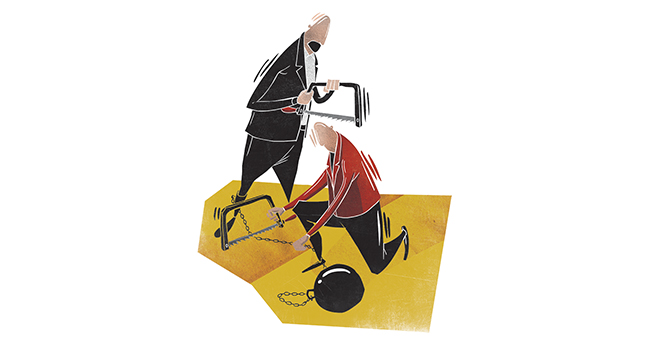 Thus today's Kurdish politicians forget the fact that the AK Party endeavors to continue the reconciliation process contrary to past governments. They have now lost their moral superiority in the eyes of the public after showing open support for the latest terrorist attacks by the PKK

Turkey's peace process is teetering on the brink, as the country has been shaken by several terror attacks in the southeastern region over the last couple of months. Recent attacks are overwhelmingly being carried out by the PKK (Kurdistan Workers' Party), which is defined as a foreign terrorist organization according to the U.S. Department of State, NATO (the North Atlantic Treaty Organization) and the Council of Europe. The PKK, which also uses several names in its operational structure such as Kongra-Gel, PYD, YPJ, YPG, etc., is trying to create some so-called "self-administered" liberated zones in some Kurdish populated areas in the southeastern region of the country. The organization is mining highways, building road blocks, attacking building sites, burning construction machinery and attacking military forces, local police, public officers, civilians, private properties and even A&E ambulances.

Things have deteriorated to this state as indoor negotiations between the state and the PKK collapsed after the recent general elections on June 7. In the face of the recent escalation in attacks, Turkish security forces are actively involved in several operations in the region.

President Recep Tayyip Erdoğan gave a strong message of determination to keep up these operations in his latest speech in Rize: "Our recent operations are not temporary. We will maintain our determination. There is no room for slackness or pauses. We will continue with the same determination. They lean on terrorist organizations. We lean on Allah and the people. We continue our march with our people. Those who support terror and who control terrorists will ultimately perish."

Has Turkey turned back to the '90s?

In the face of these recent events, several political analysts argue, "Turkey has returned to the 1990s." The era they are referring to was known for widespread PKK terror that the state and military responded to with illegitimate counter-terror measures. They are primarily using this rhetoric to accuse the state of returning to the policies of the dirty war in the region, aiming to find a military solution to the Kurdish problem and using the state apparatus for state-terror tactics against the civilian population.

But is this truly the case in Turkey now? Has the country really returned to the '90s? Has the Republic of Turkey returned to its counter-terrorism policies of the 1990s? Has the country entered an irreversible period like in the '90s where both sides forgot fair fighting, and the rule of law perished in the cycle of violence? Does this explain the reality on the ground?

To answer these questions, we need to make a historical comparison and remember and review the facts of the '90s in Turkey.

What are the facts of '90s Turkey? Beyond the rhetoric, let's look at statistics, numbers and figures.

Starting in 1987, the 13 overwhelmingly Kurdish-populated provinces were governed under a state of emergency and ruled by state emergency regional governorships till their abolition by the AK Party (Justice and Development Party) government in 2002. In line with the military coup-designed Constitution, all basic civil and political rights were suspended in these regions, including freedom of travel, freedom of speech and the right to organize, and there was a curfew after sundown.

At the time, PM Tansu Ciller responded to a question on whether some public officers were involved in illegal counter-terror operations, strongly asserting, "Those that are shooting for the state are honorable, as well as those that are being shot for the state."

At the time, several intellectuals and prominent figures were assassinated, such as Muammer Aksoy, Çetin Emeç, Musa Anter, Eşref Bitlis, Metin Göktepe, Turan Dursun, Bahriye Üçok and Uğur Mumcu. Most of these cases remained unsolved, the perpetrators unknown, and nobody charged due to investigatory timeouts.

To prevent logistical support for Kurdish guerrillas, the state was involved in the biggest cleansing in the region of the Kurdish population. According to İHD and TİHV (Turkish Human Rights Foundation), almost 4,500 villages were set afire by the state, and at least 1 million people were forced to migrate. At least 1,500 lawsuits were opened in the ECoHR (European Court of Human Rights) by villagers whose villages were burned.

The political arena was closed to Kurdish politicians and fair discussion. Kurdish parties, the HEP, DEP, DTP, ÖZDEP and HADEP, were closed down by the Constitutional Court; Kurdish MPs such as Leyla Zana, Hatip Dicle, Orhan Doğan and Selim Sadak were imprisoned. These parties were not just squeezed by the legal apparatus, but also faced secret police terror: On Feb. 18, 1994, DEP headquarters was blown up.

According to the TBMM (Turkish Grand National Assembly) Investigation Commission, torture was regularly used. According to independent figures, at least 25,000 people were tortured. By 2001, more than 10,000 citizens had had brought 2,700 cases against Turkey to the ECoHR, according to TBMM figures; several of these were related to torture and ill treatment.

The Kurdish language was banned. People were imprisoned for giving Kurdish names to their children. Mayors were convicted and charged for using the letters W or Q on signs.

Regardless of the extent of this list, the nature of the era was the same: State terror and illegitimate counter-terror measures. In sum, the Turkish state involved itself in terror activities for the sake of finishing off the Kurdish insurgency. The image of the '90s refers to state terror, lack of the rule of law, illegal detentions and torture, a squeezed political arena, a state of emergency and a lack of security...

How can today be defined as the '90s?

Turkey has radically changed since then. As EU Negotiation Progress Annual Reports and ECoHR statistics confirm, Turkey has shown great improvements in political and civil rights, both in Kurdish populated areas and in the rest of the country. No illegal counter-terror organizations are operating today. Almost no political assassinations have taken place for the last five years. In contrast with the '90s, no appeal has been made to the ECoHR from Turkey regarding torture and ill treatment since 2012.

The legal political arena is not closed to Kurdish demands today. Even the most extreme proposals for regional autonomy or regional independence are freely discussed in public. The Kurdish constituency is being represented by 80 MPs in today's Parliament.

Comparing Turkey today to the '90s is a bad explanation that does not basically fit the facts. It is a false accusation that the Republic has returned to using state terror tactics against its Kurdish population. Despite the escalation of the conflict in the region, Turkey is strictly obeying the legal boundaries in this fight against terror.

A state has the right to fight a terror organization that is killing civilians and public officers on a daily basis. Nobody can expect a sovereign state to allow so-called "self-administered" liberated zones, where the state cannot operate. It is not just a right, but also a responsibility to ensure the safety of their citizens for the state. Since June, 56 public officers have been killed by the PKK. No democratic state can be expected to tolerate this.

The line here is drawn on the question of whether the state apparatus is obeying the law and respecting the rule of law while fighting terror. We all have the moral obligation to oppose a state that uses illegitimate counter-terror tactics, and if the Republic of Turkey turns into such a state, we should do it firmly. But despite several problems, this is not the case in Turkey - the Turkish state is far from repeating the 1990s, and no conscientious commentator can say that Turkey is applying illegitimate practices of counter-terrorism.