Thank You for the Reminder, Mr Edelman 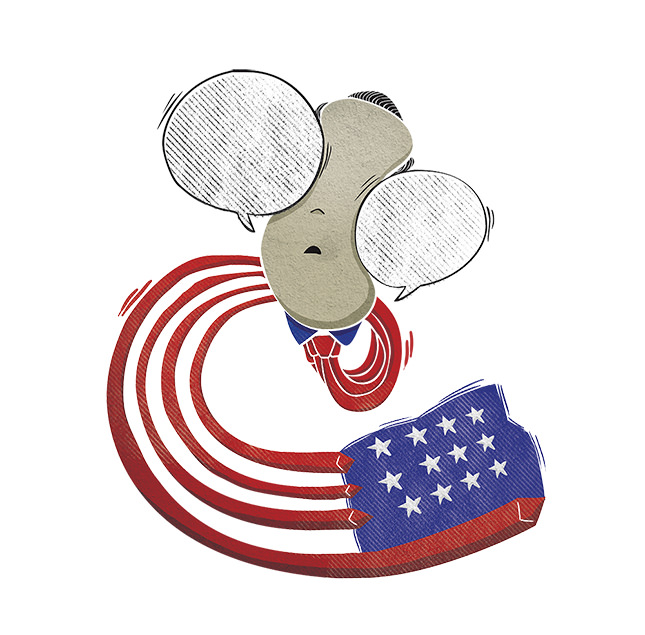 The latest editorial in The New York Times by Eric Edelman, the U.S. ambassador to Turkey during the George W. Bush administration, purports the American neocon in aim to smear Turkey with an anti-AK Party and anti-Erdoğan campaign

Former U.S. Ambassador to Turkey Eric Edelman should be thanked for his NYT editorial ("America's Dangerous Bargain With Turkey," Aug. 27, 2015) hinting ominously at impending disaster stemming from U.S.-Turkish cooperation in Syria. Edelman's missive, coming from one of Washington's prominent neo-conservatives, is a welcome reminder of how distorted the political narrative on Turkish domestic politics has become in the past decade.

In August 2003, Mr. Edelman arrived in Ankara after the George W. Bush Administration lied its way into the Iraq invasion; at that point, everyone in Turkey understood Edelman as a sort of "Typhoid Mary" of regime change. Edelman later denied the rumors that were spread about him in the Turkish press but there could be little doubt about the message that the Bush Administration sent by appointing a person of Edelman's stature as Ambassador to Turkey at that particular juncture. After the failure of the March 1, 2003 Parliamentary Resolution incited howls of rage from Washington, Paul Wolfowitz was dispatched to Ankara to do some browbeating. Then it was announced that Edelman would arrive to replace the hapless Robert Pearson. Apparently that meant "no more messing around." Even before Edelman arrived, the infamous July 2003 northern Iraq incident between U.S. and Turkish soldiers, in which Turkish soldiers were hooded by the U.S. soldiers who arrested them, created a hostile atmosphere.

Despite the gloomy circumstances surrounding Edelman's arrival, I remember Turkish-American relations during Edelman's tenure in Ankara as mostly uneventful, but maybe that was because everything was overshadowed by the situation in Iraq. Other events, most not directly related to Turkish-U.S. relations, occupied our attention while Edelman remained ambassador: The November 2003 truck-bombings in Istanbul, the June 2004 Istanbul NATO conference, and Erkan Mumcu's rise and fall in the Justice and Development Party (AK Party) all occurred in that period.

Edelman's term in Ankara lasted less than two years, and there were rumors that his activities had gotten him into trouble. But it's more likely that the Bush administration decided that he was needed for more pressing matters and he was given a top post in the Defense Department soon after his return to the U.S. Edelman's departure from Ankara was marked by a farewell dinner with then-Prime Minister Recep Tayyip Erdoğan at which wine was served, so one assumes that relations between the two politicians were not excessively tense. Edelman's time in Turkey, however, did coincide with an intensely negative swing in the anti-AK Party rhetoric coming from neo-conservative pundits like Michael Rubin and Robert L. Pollock, which I described in two essays for Serbestiyet.com in July.

What Changed in 10 Years?

So why did Edelman emerge now to broadside the current Turkish administration? Edelman left Ankara a little more than 10 years ago, and the neo-conservatives have been out of power since the beginning of the Obama administration. In the meantime, the narrative on Turkey in not only the international press but also the domestic Turkish opposition media has swung ever rightward. Today, the anti-AK Party attitudes that neo-conservative writers like Rubin, Robert L. Pollock, Daniel Pipes, and others developed in the 2003-2005 period have come to dominate the entire spectrum of political commentary on Turkish affairs. Even nominally liberal publications like The New York Times, The Economist and The Guardian now routinely publish articles on the AK Party and Erdoğan that employ rhetorical devices developed a decade ago by those right-wing ideologues. Consequently, Edelman's column seems to coincide neatly with the themes on Turkish politics now current in most of the international press and even the domestic opposition press.

For example, Edelman urges U.S. cooperation with the PKK, a group designated as a "terrorist organization" by the U.S. State Department (and was so while Edelman was ambassador to Turkey). Edelman neglects to mention that detail in his column. This attitude is typical of America's right-wing policy community. The same sort of hypocrisy led the Reagan administration to fund and arm extremist militants, including Osama bin Laden, in Afghanistan during the 1980s. Likewise, the George W. Bush administration established a murky relationship with the Mojahedin-e-Khalq, a cult-like Maoist Iranian militant group based in Iraq since the 1980s, which was also designated as a "terrorist organization" by the State Department (that designation was lifted in 2012). That group has been blamed for a number of violent incidents and assassinations in Iran during the decade since the U.S. invasion of Iraq. The PKK, of course, is also an armed Maoist organization with cultish tendencies that has been engaged in armed conflict with the Turkish state since the 1980s.

Neglecting the PKK's official status as a "terrorist organization" is an error of omission, but Edelman's entire column is riddled with the same distortions and inaccuracies featured in other international press articles on Turkey. Really, I should go sentence-by-sentence through Edelman's editorial to display just how fantastic his version of events is, but I'll focus only on several important items in order to not tax the reader's patience. Most important is the statement in the fourth paragraph blaming Erdoğan for "reigniting" the conflict between the Turkish state and the PKK. This has been the theme since late July in both the international press and the domestic Turkish opposition press. In fact, the PKK initiated a new campaign of violence by October 2014 at the latest, and high-ranking members of the PKK's organization, specifically Bese Hozat, declared an end to the cease-fire a week before the Turkish military began to bomb the PKK's mountain camps. The July 22, 2015 cold-blooded murder of two sleeping policemen in Urfa, which the PKK immediately claimed responsibility for, was the final trigger for the Turkish state's response. Either Mr. Edelman is not aware of the reality of the situation, or he is prevaricating.

A second gross inaccuracy is Edelman's claim that the AK Party and Erdoğan want a "Sunni-dominated" Syria. Besides the fact that confessional or sectional favoritism has always been vigorously denied by the AK Party, there is the simple Syrian truth that most commentators, like Edelman, have purposefully overlooked: Syria's society is a vastly Sunni society. The CIA World Factbook shows Syrian society as 74 percent Sunni and 90 percent Arab. This means that Syrian democracy, when it emerges, will likely be governed by political parties with Sunni Arab identities. This is a basic demographic reality.

Following the Syria accusations, Edelman rolls out a tired trope, that President Erdoğan wants Turkey to become a "one-party state." This theme was devised by the neo-conservative policy propagandists mentioned over a decade ago. Just how many free, fair, open and transparent elections must the AK Party win before Washington, D.C.'s policy community understands, en masse, that neither the AK Party nor Erdoğan has authoritarian ambitions? Furthermore, American observers must accept that exactly what AK Party supporters are voting against is a one-party state. Turkey had a one-party state from 1925-1950, and has subsequently suffered repeated military incursions into politics with tragic results. The Turkish military and state actors who benefitted from the single-party state, its institutional legacy and the Turkish military's prolonged tutelage over the Turkish political system comprise the political reality that the AK Party is working against in order to solidify democracy, increase transparency, and strengthen state institutions.

The policy recommendations Edelman provides at the end of his column are, other than mind-boggling, shameful. Restrict a stalwart 60-year member of NATO's access to senior-level meetings? Reduce intelligence cooperation after Turkey has spent the past year asking for more intelligence cooperation in the fight against the Islamic State of Iraq and al-Sham (ISIS)? Withhold American support for Turkey in international financial institutions even though Turkey is currently conducting one of the most successful and constructive G20 presidencies that the organization has enjoyed? The politest thing that can be said in response to such recommendations is that Mr. Edelman apparently did not think them through carefully.

Last but not least, a note for any Western liberals/progressives/leftists who have read this far: Look closely at those, such as Mr. Edelman, with whom you share an anti- AK Party, anti-Erdoğan policy position with. This isn't because you to suspect that you might be mistaken? Sharing a broad political stance with the right-wing Washington policy community doesn't cause you to feel any concern about your assumptions or your information?