Aylan Kurdi facing the Kaaba: Time for Mecca to be Mecca 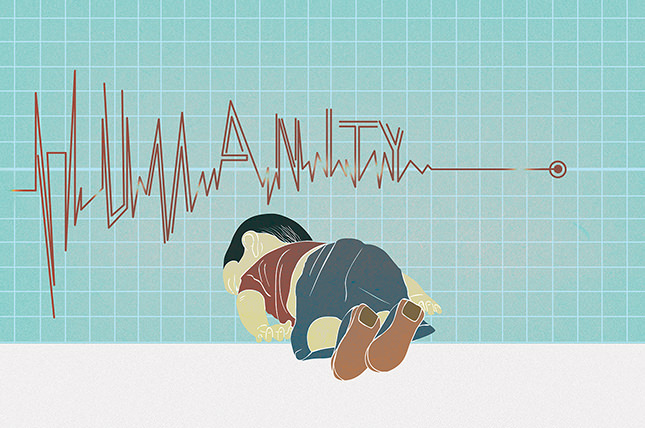 If the atrocities of the Assad regime and the indifference of Gulf Arab and European countries to the plight of Syrians is to continue, the world should be prepared to witnessing further deaths like that of Aylan Kurdi

The heartbreaking death of Aylan Kurdi seems to be finally mobilizing us and catching the world's attention to the ongoing ordeals that displaced Syrians are going through on a daily basis. But why did it take so long for humanity to realize that there is such a grave tragedy affecting millions of Syrians, men and women, children and the elderly, the disabled and the vulnerable?

The atrocities of the Syrian regime have been horrendously shattering Syrians' lives since 2011, and as such, death has been the grim reality that Syrians have been experiencing for years. This being the case, why did it take us years to shed some tears over Aylan's death and realize the destitute situation that Syrians are in. How about those children whose bodies were shattered by barrel bombs or those who lost their lives due to the regime's bombings? Their images were also broadcast across the world.

Were these images not tragic enough to create a well-advanced collective response?

Is it because international media finally took some responsibility and collectively raised the immense tragedy that people are going through? Or is it because we have been used to the other images of brutal killing of children by Syrian President Bashar Assad's regime and Aylan's was one that was unusual? Or is it because the issue is becoming unavoidable because dead bodies were washing up on the beaches where we are meant to have fun?

Those of us, be it journalists, columnists, ordinary people and so on who are blaming British Prime Minister David Cameron for using the term "swarm" when describing the refugees in Calais for their desperate attempt to get into the U.K. or criticizing his government's rigid refugee policy and criticizing that the U.K. is not shouldering its share of refugees, how much and how long have we failed in our share of responsibility in creating awareness and putting pressure on policy makers. The collective media campaign titled "refugees welcome" has already brought about some change in that the U.K. will be taking in more refugees. So, let's face it, it is us who can bring about change when there is compassion, decisiveness and collective work. But all these efforts will only gain meaning when there is continuity in embracing the sorrows of people escaping horror and violence.

If this is not the time, then when will wealthy Arab states act constructively and listen to the pleas from Muslims?

On the other hand, in all of this, it has to be said that according to cultural norms the immediate neighbors have more responsibilities toward the sorrow of their neighbors, regardless of the Western world's part in what is going on in conflict-ridden countries such as Iraq, Afghanistan, Syria, Libya and Yemen when there is a crisis or a situation that requires help. The world has witnessed that as a neighbor of Syria Turkey has gone above and beyond its duty by taking in the highest number of Syrian refugees - over 2 million - and so have other neighboring countries such as Jordan and Lebanon.

But what are the wealthy countries of the Arab world such as Saudi Arabia, the United Arab Emirates (UAE), Kuwait, Bahrain and Qatar doing? How many refugees have they taken in so far? Well, reportedly not one single Syrian, which is shameful.

It is understandable to be irritated by Hungarian Prime Minister Viktor Orban's offensive and discriminatory remarks about his fear of a Muslim influx, but it is also undeniable that the wealthy Arab states, some of which are playing a key role in the ongoing war in Syria, are failing once again their fellow Arabs. Imagine Saudi Arabia, which is home to Mecca, Medina and Muslims' holy pilgrimage site, the Kaaba, and it is not one of the favorite destination that people in destitution are fleeing to, but European countries despite treacherous journeys. Is it because the borders of Arab countries are stricter than European countries borders? What have we heard so far from the leaders of these countries concerning the tragedies that displaced people are going through?

What happened to the values of solidarity and helping those in need?

One of the fundamental duties of faithful Muslims is to help those in need. Where are the traces of this in the Muslim world when it comes to tragedies of such a large scale? How could Mecca, which is considered the holiest city in Islam due to being the location of the Kaaba, which is the direction for Muslim prayer as well as pilgrimage, not be a place to seek refuge from terror and violence for people who are fleeing for their lives when all Muslims turn to Mecca to ask for God's mercy? Or is it as Robert Fisk detailed in his Sept. 4 article, because of the humane values that Europeans have that displaced people from the Middle East and Africa are fleeing to Europe, scaring Europeans with all sort of potential problems? Some fear that there may be terrorists among the refugees, some fear they may carry infectious diseases, some fear there will be less jobs for native Europeans, some, like Orban, fear that Christian land will lose its base, or is it because refugees are seeking the financial comfort that European countries offer? If the latter, what about the wealth of oil-rich Arab countries? Where is Islam and Islamic values in all of this? If Islam is all about equality and the Kaaba is the place to show this, when performing the hajj everyone wears a white garment to indicate that no human being is superior and to remind Muslims that when they pass away nothing goes with them apart from the white garment and burial rope, how could the rulers of Saudi Arabia be so reckless about the issues concerning the Muslim world. Do they not hear the holy Quran that is continuously recited at the Kaaba? If so, what is the problem? Do the messages of the Quran not penetrate their hearts? If they do, why is there this silence and lack of action? Why is it that Muslims are having to turn to Europe for help and rescue when Muslim countries have the resources and finances to accommodate their fellow Arabs?If not now, when will the rulers of Arab states assume some heartfelt responsibility? Isn't it time for Mecca to be Mecca? Isn't it time to re-clean the Kaaba and Mecca from all the idols of money, arrogance and waste? And isn't it time for every single one of us to clean our hearts and hear and implement what famous Turkish novelist Alev Alatlı said recently: "Things that we do can be legal, but not legitimate and morally right." So let's stay legitimate when managing, when interacting, when trading and when making policies.

What Alatlı is emphasizing is significant because the current refugee tragedy is happening only because of illegitimate actions of various actors in Syria and the recent tragedy is just a reminder for all of us - individuals, organizations and states - that it is only rightful acts that lead to rightful outcomes. What we have seen in Syria and Iraq is a dirty war between various actors with no regard for human dignity and the result is millions of Aylan Kurdi-s and an immense refugee crisis with tragedies like Alyan's. Therefore, it is time for all these actors to stop using the homeland of millions of Aylan Kurdi-s as a battle zone to settle some accounts and instead to work with countries in the region toward a solution. And it is time for the Syrian regime to be held responsible for its war crimes and the distress and loss that it has been causing millions of Syrians just so that the rule of one family continues. The international community should mount pressure on Russia and China for blocking the U.N.'s action in Syria. The alternative is clearly not in the best interest of anyone.