Iranian revolution at the crossroads 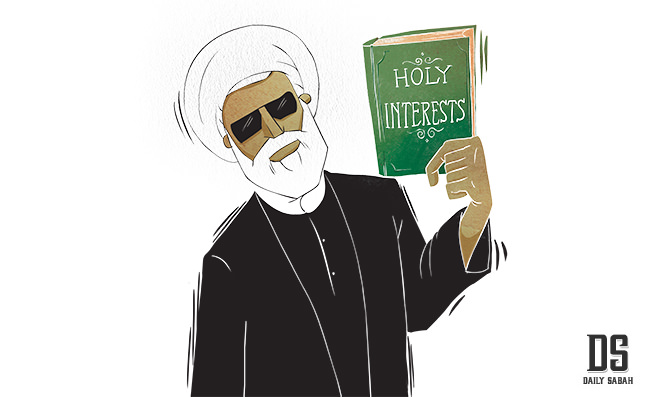 by Omair Anas Sep 10, 2015 12:00 am
Iran, with its allies Russia and China, has rescued Syrian President Bashar Assad's regime from an immediate fall, but it might not help save the Iranian revolution from its gradual and imminent decline. Historically, when the first supreme leader of Iran, Ruhollah Khomeini, laid down the intellectual foundation of the "Islamic revolution," he employed many popular and populist slogans, such as "la sharqiya la gharbiya, umma wahda Islamiya" [no East, no West, one unique Islamic umma] to narrate his idea of global Islam and its independence from the Eastern or Western divide. In many speeches and in his interactions he outlined the Iranian foreign policies to be based on resistance, justice and independence. These ideals were Islamic because they were deeply embedded in his theological understanding, Shiite philosophy, indeed. For Iran's Arab neighbors and newly liberated Muslim nations, where it was very attractive and revolutionary, an agenda for independence and support for liberation movements even when there was no colonial control was suspiciously sectarian.

Reality behind the populist slogans

Khomeini's revolutionary rhetoric was constructed in the most convenient political discourses, having great acceptability in the turbulent region. Khomeini's populist discourse conveniently carried anti-Israeli, anti-American and anti-Western rhetoric, which became easily popular among many Sunnis. Khomeini's famous letter to Soviet President Mikhail Gorbachev containing the spiritual teachings of Islam, his fatwa against nuclear and chemical weapons much before Iraq's use of chemical weapons against Iran in 1988 and his support and cooperation with the Islamist groups around the world, created many pro-Iranian transnational solidarity networks. At the official level, it was the time when the D8 group was formed constituting eight developing Muslim countries including Turkey, Iran, Egypt and Pakistan. He addressed the international Muslim audience to explain how the Iranian Shiite belief is distinct from Sunni belief and that rebellion against a repressive regime is obligatory and he often accused Sunnis of supporting repressive rulers. Khomeini once said: "This is the root of the matter: Sunni-populated countries believe in obeying their rulers, whereas the Shiites have always believed in rebellion - sometimes they were able to rebel and, at other times, they were compelled to keep silent." He even spoke on behalf of Sunnis saying, "the Sunni youth do not accept the teaching of their fuqaha [jurists] that one must obey the government, so they too may rise up in revolt. The likelihood is greater in areas with a Shiite population."

The anti-Hafez Assad uprising in 1982 by Syria's Sunni population called his bluff. Instead of supporting this uprising as he was supposed to, Khomeini dismissed it as the handiwork of foreign conspiracies, though, in private, he mildly expressed his displeasure over the ruthless massacre of Sunni Muslims in Hama. Iran's recent Syrian policy is by far and large the continuity of Khomeini's purposeful ambivalent revolutionary rhetoric. The Sunni Islamists who had been supporting Iran are now confused as to how an "Islamic revolution," opposed to the secular regimes in Egypt, Algeria and Iraq and "un-Islamic" kings and emirs, can be extremely lenient and generous to a secular Syrian regime. The Islamic world is perplexed over Iran's absolute and unconditional defense as well as overt and covert military support to Assad in Syria and former Iraqi Prime Minister Nouri al-Malaki. This change has come along with gradual dilution of Iran's anti-Israeli rhetoric and greater engagement with the Americans and Europeans toward finalizing the nuclear deal. The Sunni supporters of Iran, often Islamists, look at this Iranian position as not guided by its proclaimed revolutionary principles. The Iranian leadership also found it very difficult to rationalize its full support to the Iraqi regime's systematic exclusion of Sunnis, increased cooperation with the "Great Satan," the United States in Iraq and Afghanistan and finally its aspiration to have an un-Islamic nuclear capability, if not the weapon itself. This, in all meanings, is the emergence of a new Iran, departing from its revolutionary ambivalence to assert its role in the region, often perceived as a quest for Iranian hegemony in the region by Iran's nervous Arab neighbors.

Everything for a regional hegemony

There are many explanations of Iranian behavior that have created a perpetual psychological pressure in its nervous neighborhood. The Iranian security dilemma, as one Iranian commentator has said, is derived from the great psychological pressure from the state of isolation in the midst of the sea of foreign threats. In the last 300 years, Iran lost its great Persian and Safavid Empire and much of its due regional influence and stature despite having the size and population as big as the entire Gulf region including Yemen, Iraq, Syria and Jordon. This sense of isolation in Iranian strategic thinking has influenced Iran's adoption of an omniscient narrative of an Islamic revolution to legitimize its actions within the larger Muslim society. There is no change from Khomeini to former President Mahmoud Ahmadinejad to current President Hassan Rouhani with regard to Syria. Iranian strategic thinking has found convenient options in Syria's sectarian divide. The contradiction between Iranian security dilemmas and its revolutionary rhetoric found expression in its initial welcome to the Arab uprisings as the continuation of the "Islamic revolution" or the "Islamic awakening" and then its dramatic disapproval of the anti-Assad uprising as unrest and terrorism conspired by foreign forces when the uprising entered Syria. Iran's total reliance on Russia and China in exchange for their support in the U.N. Security Council on the nuclear deal and the Syrian crisis has completely altered Iran's "neither East, nor West" to "only interests." These unavoidable shifts within Iran's regional policy discourse have been accompanied with rising Persian nationalism in its domestic politics. The entire post revolution generation has seen nothing except isolation and exclusion and failed revolutionary idealism.

Iran today is at a crossroads between its revolutionary liabilities, of which many of its Islamists, liberals and nationalists want to get rid of, and the regional realities that prevent Iran from reclaiming historical Persian pride. Iran's detachment from its revolutionary rhetoric may be a temporary relief for its Arab neighbors, but the alternative discourse replacing it, mainly Persian nationalism often disguised as revolutionary, displays a more inconvenient face of Iran in becoming a hegemon, though both of them are reactionary. The nuclear deal alone does not guarantee everything that Iran needs to become a regional hegemon post-revolution, as the nationalists, similar to ayatollahs, may dream, they may also aspire for or create a revolutionary Shiite force. To be a part of the regional system, politically and economically, is the most secure way for Iran to assume a greater regional role. Regional powers, mainly Saudi Arabia, may not be able to stop Iran from achieving its goals, except by meeting Iran halfway. But the scenario looks very clear in that Iran is trying to assert its role either as a powerful Persian country in the region or as an assertive Shiite soft power, precisely to end its revolutionary ambivalence. In both objectives, Syria and Iraq and their existing regimes are the most vital means to this end.