Islam and democracy in the age of democratization 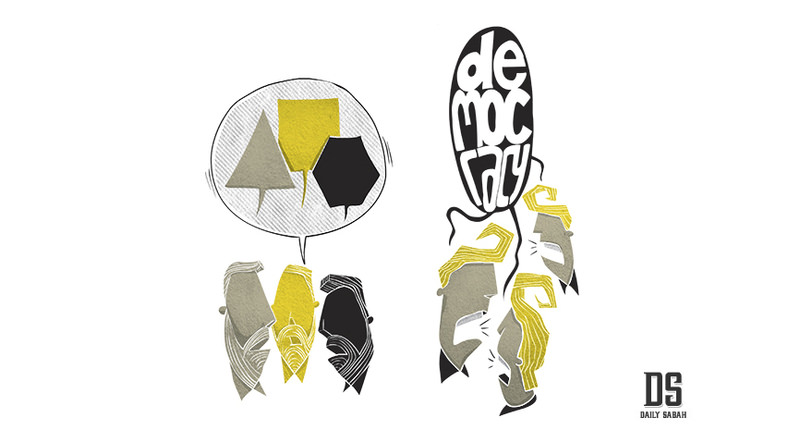 Since democracy is a type of self-forming government, the reason behind the differences in this concept between other societies arises from the geopolitical and cultural differences among societies as well as their civilizational characteristics

Nineteenth century French political thinker and historian Alexis de Tocqueville in his 1831 work "Democracy in America" discussed what he calls the "great political problem of our times." The "organization and the establishment of democracy in Christendom," according to Tocqueville, "is the great political problem of our times." By now, this almost-two-centuries-old observation is still relevant, especially in the context of debates and discussions revolving around the relationship between religion and democracy in the Muslim world, a debate that has highly intensified in the post-9/11 era.

This observation reminds us, in the words of Dr. Nader Hashemi from the Josef Korbel School of International Relations at the University of Denver, that the "problem of religion's relationship with democracy is not an exclusively Muslim phenomenon," but one of those problems that other religions and religious traditions, Christianity in particular, "have had to struggle with" in the past. Commenting on Tocqueville's observation from a 21st century Muslim point of view in, Hashemi argues that to the extent that Tocqueville's observation is correct, it could be extrapolated that in the same sense that the "great political problem" facing Europe in the 19th century was the question of democracy in Christian lands and in the same way, in the 21st century, arguably "the great problem of our time is the establishment and organization of democracy in the Muslim world."

Hashemi is one of the present day Muslim intellectuals who has been actively contributing to this discourse. For example, in his 2009 "Islam, Secularism, and Liberal Democracy: Toward a Democratic Theory for Muslim Societies," he analyses the theoretical relationship between religion and democracy, specifically Islam's relationship with liberal democracy, by adopting historical and comparative methodological approaches. It discusses the relationship between Islam, Muslim-majority societies such as Iran, Turkey and Indonesia and liberal democracy in a way that advances theory and practice regarding their relations and this relationship is the immediate focus of the study, and the conclusions have a much broader applicability in illuminating the theoretical relationship between religion, secularism and democracy in general, and in contributing to the development of a liberal-democratic theory for Muslim societies in particular.

He has been developing and advancing these arguments and has put forth them in one way or another. For example, in his chapter in Asma Afsaruddin's 2011 edited volume "Islam, the State, and the Political Authority: Medieval Issues and Modern Concerns," presenting Indonesia and Turkey as example case studies, Hashemi tried to overcome the "Problems of Secularism in Muslim Societies" by rethinking the relationship between "Religion and Liberal Democracy." He has tried to answer a paradox - the paradox that is at the core of the debate on Islam and democracy that "modern liberal democracy requires a form of secularism to sustain itself" (p.173). For Hashemi, in order to reconcile this paradox, "the cultivation and development of a homegrown theory of 'Muslim secularism' - one which is authentically Islamic, not a western import - yet it simultaneously lends support to a functional secularity of the political system, which all liberal democratic polities require in order to sustain themselves." In other words, a type of political, not sociological or philosophical secularism is needed.

The issue of the compatibility of religion and democracy has not only been discussed in the 21st century in the Islamic world, but from the final decades of the 20th century, and from the 1990s especially, there has been a growing tendency in the debates and discussions revolving around the question of the relationship between Islam and democracy, or the compatibility and coexistence of the teachings of Islam with the principles of democracy. After the events of 9/11 and the subsequent war on terror, this issue came to be discussed with much fervor, since in this period Islam was frequently described as a violent and terrorist religion, unconcerned with peace, human rights, justice, tolerance, pluralism and democratic values. Provoking widespread discussion within and outside the Muslim world on this debate, and with the Arab Spring, these issues have become focal points of worldwide public debate in the Middle East and North Africa, Asia, the West and the rest of the world.

Generally speaking, one finds two main poles or groups that have extensively debated and discussed this issue - opponents/rejectionists and proponents/supporters. On one side there is the opponent group, including various Western academics as well as fundamentalist Muslims who believe that Islam and democracy are totally incompatible. Among them the prominent voices include Bernard Lewis, Francis Fukuyama - famous for his "End of History" - Benjamin Barber, Robert Kaplan, Ernest Gellner, Daniel Pipes and, most influentially, Samuel P. Huntington for his theory of "The Clash of Civilizations," all collectively emphasizing and underscoring the idea that Islam and Islamic civilization contrast and conflict with liberty, democracy, human rights, gender equality and other emancipating principles.

On the other hand, there are a growing number of intellectuals, Muslims and non-Muslims alike, the proponents, who have called for pluralist democracy, or at least for some of its basic elements. The prominent academics who have written and are writing extensively and optimistically on the topic in ways that challenge the establishment perspective, among others, include: Professors John Esposito, John Voll, Dale Eickelman, James Piscatori, Noah Feldman, Abdulaziz Sachedina, Asef Bayat, Khaled Abou el-Fadl, Abdelwahab el-Affendi and Abdou Filali-Ansary, and Drs. M.A. Muqtedar Khan, Nader Hashemi and Kamran Bokhari.

Engaging in a process of reform, the proponents argue the compatibility of Islam and democracy by using traditional Islamic concepts like "shura" (mutual consultation) between ruler and ruled, "ijma" (community consensus), "ijtihad" (personal reasoning), "bayah" (oath of allegiance),"maslaha (public welfare) and other such ideas and ideals having roots in the primary sources of Islam. These mechanisms can be used to support parliamentary forms of government with systems of checks and balances between the executive, legislative and judicial branches.

On the basis of these interpretations, the majority of modernist or reformist Muslim intellectuals insist on the compatibility between Islam and democracy with a reinterpretation of key Islamic political concepts and values, institutions and legal principles embedded in the primary sources of Islam, albeit democracy here is conceived with certain qualifications and limits. For example, in their 2013 work "Political Islam in the Age of Democratization," Kamran Bokhari and Farid Senzai offer a comprehensive view of the complex nature of contemporary political Islam/Islamism and its relationship to democracy by focusing on the process of democratization vis-à-vis political Islam. It provides a compelling and insightful analysis of "Islamism and the role that religion is likely to play in any future Muslim democracy." In this book they argue that one, religion will likely play an important role in Muslim politics as this democratization process unfolds and will play a role in any type of Muslim democracy that emerges from the interplay between participator and conditionalist Islamism and democratization and, two, democracy - a universal value - will manifest itself in different ways in the Muslim world because all societies have their own unique geopolitical, cultural and civilizational characteristics. It will continue on the unique path it has already forged and several types of Muslim democracies will likely take root.