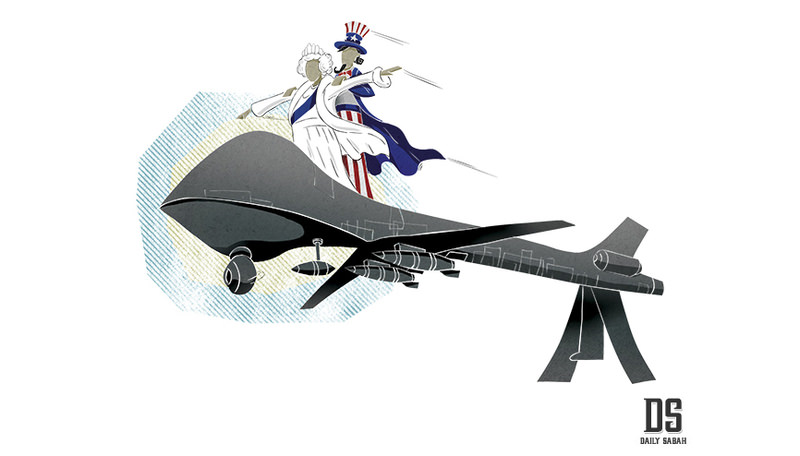 On Sept. 9, the British government announced that it had assassinated two British citizens, Reyyad Khan and Ruhal Amin, by the use of drones. In Britain, news of the assassinations has been dominated by two questions: Was the killing morally justified and was the killing legal?

In order to protect itself from charges of illegality, the British government was fastidious in its desire to show that its actions were absolutely legal and based on the sound legal advice of the government's attorney-general. The legal rationalization for this extra-juridical killing was, in the first place, given as being based on the principle of self-defense. David Cameron claimed the British government was forced to resort to using drones because it was in danger of attacks directed by these two individuals. When pressed for details on the nature of the imminent threat, British ministers spoke rather airily of reasons of national security and of planned attacks at major events, which, in fact, had already taken place and therefore the threat was neither imminent nor possible any longer. Even Cameron's own party, has raised doubt about whether there was a real imminent threat. Subsequently, the government put forward another rationale for the drone strikes: the killings were carried out because of the collective threat against Iraq. Furthermore, it transpired that the British government has a hit list of Muslims who it considers to be extremist who are to be assassinated.

DRONES AGAINST THE US

Of course, state-sanctioned and state-actioned assassinations are hardly new. Western plutocracies, have, however, tried to use the fig-leaf of liberal-democracy to preach due process and rule of law, and have publically condemned assassinations as part of normal statecraft. The drone revolution however has lowered the perception of risk in carrying out assassinations and increased the temptation to use murder as a weapon of the "war on terror." Pilotless vehicles have been used for aerial surveillance missions and even as bomb-carrying weapons since the 19th century, for example in the American Civil War and later during World War I and II. However the scale of its use by the U.S. presently - particularly during the Obama presidency - and the increase in the range and capabilities of drones, has meant the blurring of the rules of combat. Drones have not only been used by the U.S. in Syria, Iraq and Afghanistan; they have also been used to target militants in Somalia, Pakistan and Yemen - outside the U.S.-declared war zones. As far as we know only the United States, Britain and Israel have used drones for targeted killings. The benefits, as are seen in those countries using them or seeking to use them, are that the operators are not at risk, they are meant to hit targets with great precision and, unlike other aircraft, they can hover for hours over potential targets waiting for a window of opportunity to strike. We do know that the supposed precision is not a guarantee of accuracy, as the loss of civilian lives can attest to. We also know that although they may succeed in killing their targets, the larger objectives are not always served, as drone strikes alienate those who control them from the violence they unleash while also contributing to instability and creating a backlash of public opinion outside the countries that operate them.

The debate that drone assassination has generated is important because it shows that the neo-conservative strategy for fighting the war on terror has now become hegemonic. The British had prided themselves on their approach of treating terrorism as a criminal rather than military problem. This assassination shifts the British position to being closer to the approach undertaken by the U.S., Israel and other neo-conservative regimes like Canada and Australia, in which policing is being increasingly militarized. The effects can be seen not just in abstract terms but also in the equipment, tactics and training as well as practices of many police forces, most clearly seen in the United States as the Black Lives Matter campaign exposes the frequency of police killings, particularly of African-American and Hispanic American men. The militarization of policing is not simply a matter of using a more robust approach to crime or the threat of crime, but rather it undermines democratic-liberal conceptions of citizenship. It also has an international dimension as many police forces in the U.S. are now staffed by men and women who were involved in the American occupations of Afghanistan and Iraq, and have been trained and equipped by specialists from the Israeli occupation of Palestine.

The criticism of the British stance however has tended to focus almost exclusively on whether drone attacks violate international humanitarian law or the morality of a self-avowed democratic state executing its citizens without any due process. The United Nations has condemned these operations for their lack of accountability, transparency, violation of international law and overlooking civilian casualties.

Yet these criticisms miss the wider point. The war on terror has systematically stripped Western plutocracies of their claims to legitimacy and they contribute to the continuous erosion of the distinction between war and peace and the frontiers of national sovereignty. Water-boarding, rectal infusion and target-killings have become calling-cards of the war on terror. Driven on by a neo-conservative agenda, Western governments have been led to believe that coercion without legitimacy is sustainable when the difference in capacity to inflict harm is so great, that their enemies are impotent in the face of Western might. When countries who consider themselves to be guardians of the moral and legal framework of international order start to break the law, it is not a minor matter. In the same way, when police officers act like gangsters it is the same as gangsters acting like gangsters. These killings are just another sign that the war on terror is nothing more than a dirty war fought on a global scale and is beginning to signal the degeneration of statecraft into gangsterism and thuggery. The dream of a cosmopolitan world in which international laws and conventions contain the constant possibility of violence is giving way to a Hobbesian world order, in which the veneer of international agreements and laws are being worn dangerously thin. The United States led the invasion of Iraq arguing for the purity of its aims and desire to bring freedom, peace and prosperity. After Abu Gharib and Guantanamo, all they can say is "we torture less than Saddam did." The drone executions of Muslim British citizens by Britain is another sign that the international system that emerged after the Cold War is beginning to unravel. When countries who claim to uphold international law start acting like gangsters, the entire system begins to lose legitimacy; as a consequence society is more violence not less, more instable, not less and more danger, not less. There is a need for countries that have not succumbed to the neo-conservative/neo-liberal offensives, to articulate a vision of a world that offers more than gangsterism on a global scale.