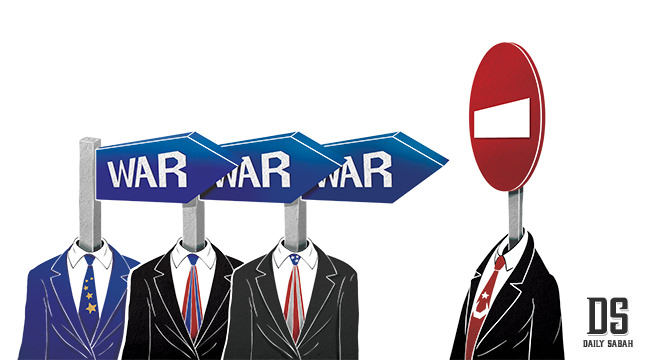 While warning the international community about the threat of the Syrian civil war, Turkey also comes up with solutions such as solving the refugee crisis in Syrian borders rather than in other countries and providing free elections in the country to end the problem

An undeclared mini world war is being fought in the Middle East today. The fact that Russia, just like Iran, has become directly involved in the Syrian war by sending troops there suggests the war will gradually assume a global character if the U.S. and EU do not change their strategy. For the present, however, aside from refugees knocking at the doors of Europe, the seriousness of the matter does not seem to be fully understood.

On the other hand, Turkey, which has been deeply feeling the effects of the war along its 911-kilometer border with Syria for almost five years, has tried to awaken the world to the seriousness of the matter from the very start. Turkey has been shouldering a burden too heavy to be borne by a single nation without creating problems for its allies. In addition to hosting tens of thousands of refugees in modern and sanitary refugee camps that are compatible with human dignity, it also shelters the rest of more than 2 million refugees all over the country. It provides these guests with temporary ID cards, health and training services and work permits. Turkey has spent more than $6 billion for all of these services, while receiving only 4 percent of it from the U.N. and other countries.

In other words, what it received is a drop in the ocean.

Apart from that, Turkey has suffered serious attacks by the Islamic State of Iraq and al-Sham (ISIS) and Syrian President Bashar Assad on its own territory, in Reyhanlı, Suruç, Niğde and Cilvegözü. It has lost over 100 soldiers and citizens in these attacks. I think Turkey is writing the brightest page of the previous and present centuries in the name of civilization, while trying not to be overwhelmed by a multifaceted and complicated problem that is too big to be overcome by a single nation.

As if it is not enough that our Western allies have not shared this burden, Turkey has also had to cope with the libel that it supports ISIS. Unfortunately, influential media organizations like The New York Times, The Wall Street Journal, The Guardian and the BBC have run news reports based on Syrian sources "speaking on condition of anonymity" to unfairly vilify Turkey. However, Turkey included ISIS on its list of terrorist organizations four years ago, even before the U.S.

Gülenist police officers and prosecutors who intercepted trucks carrying aid materials to Syrian Turkmens during the Dec. 17 and Dec. 25 process - when the Gülenist organization, which had previously infiltrated the Turkish bureaucracy, tried to stage a coup -played into the hands of the media.

Having established themselves firmly in Brussels and Washington, Gülenists fabricated false reports to undermine Turkey's image in the eyes of the world. The PKK, whose interests converged with those of Gülenists, joined this campaign. Unfortunately, Turkey's old mainstream media and some political parties like the Republican People's Party (CHP) have also supported the campaign.

The Western public might have had difficulty understanding this complicated, harsh and unprincipled power struggle within Turkey. This is quite normal. But foreign ministries and intelligence agencies of Turkey's allies certainly had detailed knowledge of the issue. However, they did not treat Turkey fairly on this matter. They seemed to think that it would provide costless and strong leverage over Turkey.

What would that leverage serve?

First of all, it was functional as an external support to the alliance against President Recep Tayyip Erdoğan and the Justice and Development Party (AK Party) in the power struggle in Turkey. Turkey has passed through an extraordinary period that began with a coup attempt during the Gezi Park protests. During that period, the anti-Erdoğan alliance included opposition parties like the CHP, Nationalist Movement Party (MHP) and Peoples' Democratic Party (HDP), and terrorist organizations like the PKK, Revolutionary People's Liberation Party-Front (DHKP-C) and the Gülenists, the old mainstream media, socialists and intellectual elites. They tried to topple the AK Party, which they could not defeat politically, through street protests, PKK terror and coup attempts masked as graft probes.

The allegations about supporting ISIS were useful for creating an impression abroad that the AK Party and Erdoğan lacked legitimacy. We cannot say that this was the official state policy of the U.S. and EU, but it was a useful manipulation for the countries that diverged from Turkey on policies on Syria. And that hinted at the other reason why that leverage was used: Gaining leverage to induce Turkey to act as a ground force in Syria through allegations about supporting ISIS entailed a negligible cost.

But Turkey is the country that has suffered the greatest damage from the Syrian civil war and Erdoğan has been declared a heretic, i.e., an infidel who deserves to be killed, by ISIS. Not only did the West ignore these contradictions, but it also suppressed the fact that the PKK, which is fighting ISIS in Syria, is a terrorist organization responsible for the deaths of 50,000 people in Turkey.

In fact, the PKK and its political arm HDP joined forces with other alliances through the calumny that the AK Party supports ISIS, and derailed the three-year reconciliation process that was launched to make the PKK lay down its arms. However, a series of democratic reforms launched by the AK Party and Erdoğan since 2002 had ended the denial of Kurdish identity and scrapped laws banning the use of the Kurdish language. A total of 60 reforms had been enacted that intended only to ensure equal citizenship for Kurds and to remove obstacles to politics.

It was for this reason that HDP Co-Chair Selahattin Demirtaş, who competed against Erdoğan along with another candidate in the Aug. 10, 2014 presidential election, achieved a significant success in terms of normalization by receiving 10.7 percent of the vote. What did the HDP do then? On Oct. 6-8, 2014, Demirtaş called on Kurdish people to take to the streets to protest the siege of Kobani. As a result, 52 Kurdish citizens were killed. Most of them were devout Kurds who were not staunch secularists like members of the PKK and HDP.

The government did not end the process despite the violence. Then, the June 7 general elections came amid these challenges. Meanwhile, the PKK did not keep its promise and stopped its withdrawal without reason. But the government maintained its positive approach to keep the process going. Benefiting from this positive atmosphere, the HDP passed the 10 percent election threshold in the June 7 elections by receiving 13 percent of the vote and claiming 80 seats in Parliament for the first time in its history.

The anti-Erdoğan alliance had bet on the HDP entering Parliament and got what it wanted. The AK Party no longer had enough seats to form a one-party government. But what did Demirtaş, who was now free from political obstacles, and the HDP do? They did almost everything they could to trigger a Turkish-Kurdish conflict.

Indeed, the PKK announced on July 11 that it left the peace talks and resumed its attacks on July 22, killing two police officers in their sleep. The PKK's attacks have since left more than 120 soldiers and police officers dead.

Turkey is fighting a bloody terrorist organization that is trying to carry the Syrian civil war into Turkey while striving simultaneously to cope with the negative effects of that war. Domestic and foreign policies have become entangled in Turkey as a result.

It is not known whether the EU and U.S., which fell into panic as refugees knocked at their doors, regret having disregarded Turkey's argument that the refugee problem can be solved in Syria itself. But the only solution to the war in Syria can be ensured through defusing the tensions in this country. This requires the establishment of a safe zone, exerting pressure on Assad and holding free elections in Syria. Turkey somehow weathers, and will continue to weather the risks it faces. If this problem is not resolved in accordance with Turkey's proposals, a World War III will come as no surprise.

Then, Syria will come closer to and even slip across Europe's borders. Leaving Turkey alone, especially interfering in its internal affairs and destabilizing it, would mean both treating an ally unfairly and the West cutting its own throat.
Last Update: Sep 22, 2015 1:52 am
RELATED TOPICS