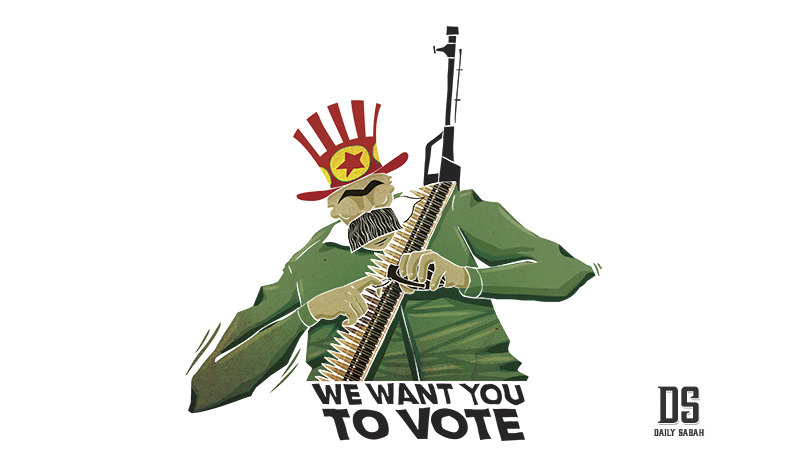 The PKK's terror, which ended the reconciliation process despite the state's wishes and efforts, and the HDP's supportive statements of this terror seem to shape the electorate's behavior in the Nov. 1 elections

Turkey's election cycle continues, as the country heads for a new round of elections this November. Following the June 2015 elections, it proved impossible to establish a coalition government, and now, the caretaker government under Justice and Development Party (AK Party) leadership, is taking the country to "repeat" elections. Despite receiving nearly 41 percent of the vote, the AK Party could not form a single party government because the Peoples' Democratic Party (HDP) passed the national threshold with 13 percent and secured 80 parliamentary seats. The June elections showed that the electorate still saw the AK Party as the only party capable of governing, while denying the ruling party yet another single party government. The wildcard - that is, the HDP passing the national threshold - worked against the AK Party in June. Whether the HDP can surpass the threshold once again in a maximum security political atmosphere will be critical to these next election results.

The AK Party's coalition talks with the Republican People's Party (CHP) yielded no results, and the HDP had ruled out the possibility of a coalition with the ruling AK Party even before the elections. The Nationalist Movement Party (MHP) set preconditions - a definitive end to the Kurdish resolution process, a full investigation of the Dec. 17 and Dec. 25 corruption allegations and the restoration of the traditionally ceremonial role of the president - that made it virtually impossible to even discuss a coalition government. Under these circumstances and after the failure of the coalition talks, President Recep Tayyip Erdoğan tasked Prime Minister Ahmet Davutoğlu to form a caretaker government. During the coalition talks, the opposition parties had either ruled out coalition negotiations (as in the case of the HDP and MHP) or interpreted the election results as a total defeat for the AK Party (as in the case of the CHP).While the political process could not produce a coalition government, the security environment shifted with the Islamic State of Iraq and al-Sham (ISIS) and PKK attacks inside Turkey. As a result, political dynamics heading into this round of elections are significantly different than they were before the June elections, particularly in the wake of the renewed fighting between state security forces and the PKK. In July, the PKK announced the end of a two-year-long cease-fire and resorted to summary executions of security officials. The pretext for the PKK to end the cease-fire was the Suruç bombing that resulted in the deaths of 33 activists. The attack was linked to ISIS, and in its aftermath, Turkey announced that it would participate militarily in the U.S.-led international coalition against ISIS. The PKK claimed, however, that the government was supporting ISIS - a propaganda theme developed ever since the Kobani crisis. The PKK tried to bolster ethnic solidarity among Kurds in Turkey and in Syria for its regional as well as recruitment goals.

Turkey's hesitation to act during the Kobani crisis was linked to questions about the political goals of the Democratic Union Party (PYD) in Syria. The PKK conducted an effective public relations campaign, promoting the idea that the Turkish state was supporting ISIS against the Kurds. This argument found resonance with many Kurds and resulted in dismal results for the AK Party, especially in the Kurdish-majority cities of southeast Turkey. As the country moves into the November elections, the course of the conflict between the security forces and the

PKK will undoubtedly have a strong bearing on the Kurdish vote. It will also play a large factor in determining whether the AK Party has the ability to once again be competitive against the HDP in the region.

As a result of the high-security political climate created by the fighting, stability as a theme of the campaign will likely have a significant impact on the election results. The Kurdish vote will be critical, and the AK Party and the HDP will compete for conservative Kurdish votes. However, the electorate in general, including the Kurds, will make judgments about how their vote will help bring stability. If voters sense that lack of stability is a direct result of the failed coalition forming process and the ensuing fighting, they may move towards voting for the AK Party in the hopes that it will garner enough votes to establish a stable, single-party government.It will be important to see who will be blamed for making the formation of a coalition government impossible. For instance, while the MHP appeared to have a principled stance in the immediate aftermath of the June elections, many inside and outside the MHP questioned the wisdom of the party's refusal to be part of any coalition scenarios. Some MHP voters may veer toward the AK Party because the MHP has no prospect of coming to power other than as part of a coalition - a prospect that party leader Devlet Bahçeli has made impossible through his maximalist preconditions. Whether the AK Party can take back some conservative nationalist votes from the MHP through the stability argument will define its chances of forming a government on its own.

In June, the HDP was able to present itself as more than a "Kurdish party" to appeal to non-Kurdish segments of society, including liberals and Alevis among others. Many voted for the HDP strategically to counterbalance the AK Party for which there were no true alternatives. This November, however, in an environment where the HDP has been unable to unequivocally denounce PKK violence, non-Kurdish voters will likely be more hesitant to vote for the HDP. It will be critical to see if the HDP can keep such voters in its camp and whether the PKK leadership's public reprimand of the HDP - and HDP's inability to confront them - will make a significant difference in the ballot box. Furthermore, the nationalist backlash against the HDP may limit their ability to maneuver and appeal to non-Kurdish voters. In the end, however, all this may add up to only marginal changes in voting percentages and the HDP may still be able to surpass the 10 percent threshold.

The resolution process, which promised to bring about a political solution to the Kurdish question, appears to be shelved at the moment - "in the refrigerator" as Erdoğan remarked. It does not appear likely that the state security forces will end their efforts to reestablish control in southeastern Turkey before the November elections, barring a surprise call from imprisoned PKK leader Abdullah Öcalan for the PKK to return to the negotiation table. The Kurdish wildcard, in its different manifestations, such as the renewed fighting or the HDP's electoral success, will be the most important factor shaping voter behavior in November.