Aylan Kurdi: A victim of an indifferent world 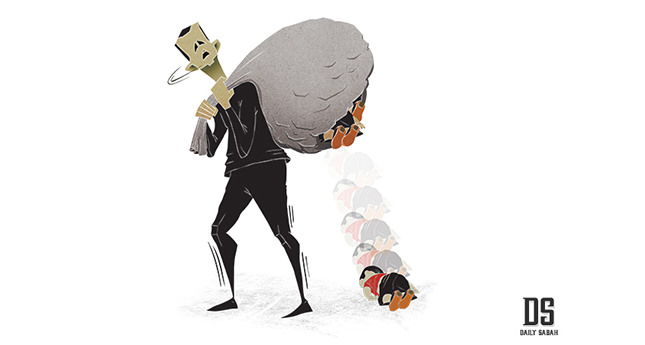 Aylan Kurdi was only one of the thousands of children killed by the failure of the international system looking at the crisis from a political, geo-strategic and economic perspective rather than a humanitarian one

No tragedy can be as painful as lifting the smallest of coffins. The images of Aylan Kurdi have shaken up the international indifference to Syrian refugees. Kurdi's dead body found washed ashore on a Turkish beach symbolizes not only the unquestionable innocence of a child, but also the cruelty of an indifferent international system that cannot deliver its promises despite having the best military equipment, political institutions and prize-winning civil societies. Perhaps, a super run on a British television channel was the best and cruelest representative of the reality; it read, "Aylan was an illegal migrant." For an insensitive media, the legal definition of a 3-year-old war refugee could not put aside useless, rather ruthless and inhuman borders. Kurdi was not alone, as many commentators rightly said. As per moderate counting, nearly 7,000 children have been killed and many more are still living at higher risks of losing their lives. Kurdi became a victim of this failing international system. He was trying to escape the brutality of Syrian President Bashar Assad's regime, the Islamic State of Iraq and al-Sham (ISIS) and the inhumane indifference of European countries, and he failed.

Hundreds of Syrian families are forced to leave the places where they were born and raised and no one wants to leave their native place, at least not forever. There is an indiscriminate bombing by the Syrian regime forces on its own people, whom it labels terrorists because they may oppose Assad's right to rule over them. For Assad, power has become dearer than the lives of his own people, who have every right to oppose him. Indiscriminate violence has been used by the Syrian state against its own people, a practice of the previous president, Hafez Assad, under whose administration some 20,000 Syrians were brutally murdered, according to Robert Fisk. From 2011 onward, stories have been repeated in a similar fashion, but rather in a more brutal way when 1,400 civilians died in a chemical attack. It took two years for the United Nations to pass a resolution to investigate the use of chemical weapons. Russian and Chinese vetoes in the U.N. Security Council have prevented international intervention but they are not able to prevent internal bloodshed and systematic killing. This veto system has failed the Middle East. Of all 79 vetoes that the United States has used, 40 are related to the Middle East, mostly to shield Israel. Similarly, all 127 vetoes used by Russia, mostly as the Soviet Union during the Cold War era, but now in recent years, have been used to protect Assad. The Russian and Chinese vetoes have been so disappointing that U.N. Secretary-General Ban Ki-moon found them "undermining the role of the United Nations and the international community in this period when the Syrian authorities must hear a unified voice calling for an immediate end to its violence against the Syrian people." Today, the entire Syrian population is internally or externally displaced at the mercy of insufficient international support. Many who fail to escape are victims who often fall into the hands of human traffickers. Kurdi's family was one of these unfortunate ones.

When the Arab uprisings were sweeping authoritarian regimes, the Syrian regime was also not immune to genuine street protests. Demands for political reforms, social justice, dignity and empowerment were met with bullets, arrests and torture. Mass defection from Syria's national army resulted in the Free Syrian Army (FSA), which had popular support from the secular civil society of Syria. Many Syrians call Assad's army his personal militia in service of his family and supporters. However, very recently militant groups linked with al-Qaida and other terrorist networks from Iraq hijacked the agenda of the Arab uprising and the conflict between the Assad regime and terrorist groups spoiled the genuineness of the anti-Assad forces and common Syrians became the victims of the spiral of violence between Assad and anti-Assad militias. Chemical weapons that the Assad regime supposedly controlled, were used on civilians more than once. Today, the Assad regime has no control over half of Syria and the FSA, ISIS or al-Nusra Front are fighting each other to control these areas. Because of not recognizing the genuine Syrian opposition, and not allowing a genuine political process to incorporate the demands of common Syrians, the Syrian regime and its supporters have painted a single picture for terrorists, opposition leadership and the FSA. Painting the Assad regime white and the militant's black is a simplified version of the conflict in which many grey areas are intentionally not shown. A picture that everyone who opposes Assad is an Islamist or takfiri terrorist is a purposefully constructed picture. Nobody wants to talk about the hundreds of social activists and intellectuals with undeniable secular credentials who have been forcefully made to disappear. This author attended the prize ceremony of the Ibn Rushd Fund for Freedom of Thought in Berlin in 2012 where Syrian social activist, Razan Zaitouneh, was awarded the prize in absentia, which was received by Professor Sadek Jalal Azm, another renowned secular Marxist scholar and a strong advocate of the Syrian revolution, just like Zaitouneh.

With immediate recognition of the crisis and genuine parties involved, terrorist groups could have been prevented from hijacking the Syrian revolution. It is no surprise that conspiracy theories are floating that ISIS was created by the Assad regime and its supporters to discredit the Syrian opposition, though the theory is as bogus as the theory of Assad being the only representative of Syrian aspirations. Kurdi and his family are also victims of the Syrian regime and its supporters' perpetual denial of the Syrian revolution and Syrians' rights for political reforms.

Regional powers including Iran, Saudi Arabia, Egypt and Turkey cannot escape their responsibility for the extreme sense of frustration among Syrians. Just because Iran and Saudi Arabia have developed obsessive mistrust, translated into sectarian language, Syrian victims are also seen with sectarian tags. So much so that most of these countries now have become part of the problem, not the solution. Turkey's reluctance to join airstrikes against ISIS and joining the Jeddah Communique has indeed helped in deepening the crisis. Now, the media says that Europeans are shaken by the images of Kurdi, even David Cameron said that the images had helped Britons change their opinion about migration. There is a problem in the European Union, which has failed to take a uniform position on the Syrian crisis and its victims. The European Union's indifferent approach to the crisis and its appeasement of Arab dictators weakened the Syrian opposition.

Those who have made the Syrian crisis complicated are more responsible to resolve the crisis; Russia, the United States and the European Union are the ones that share much of the burden of making the Syrian crisis a pawn of their geostrategic game from the colonial era to this day. It is time to look at the Syrian crisis from a humanitarian perspective more than a geostrategic perspective, as the civilians and the most vulnerable among them, the children, are suffering the most. Kurdi undeservedly paid the heaviest price for the crimes of the Syrian regime and its opponents, the indifference of the international community and the adventures of regional powers. All of them share in the culpability of his untimely death.