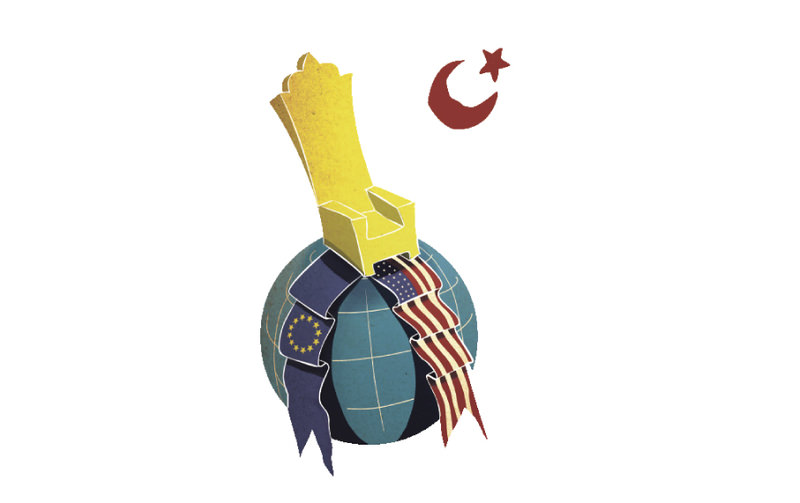 At the beginning of each century, leading countries of the world take pains to be on the spot while the opening conditions of the new century, rules of the game and roles of the players are determined, although the basic nature of the shuffle of cards and role distribution does not change much for the rest of the century. For instance, Portugal in the 15th century, Spain in the 16th century, the Netherlands in the 17th century, France in the 18th century, Britain in the 19th century and finally the U.S. in the 20th century proclaimed themselves the hegemonic powers of their respective centuries. The areas they had dominated evolved from deserts, fields and lands to seas. In the 20th century, skies became the area of domination with the space and cyberworld turning into the real battleground. Naturally, dividing up of territory and power is always a bloody and painful process. When a paradigm comes to an end and another emerges, large and poor masses are crushed by falling pillars that are re-erected later.

In fact, the fight for the 21st century began when the Soviet Union collapsed and globalization started to turn the world into a small village.

Initially, there was talk of a unipolar, i.e., U.S.-led world. I think it stemmed from a six-century-old tradition. While the disintegration of the Soviet Union and Russia's becoming a medium-size power were celebrated and the U.S. was deemed the world's sole hegemon, market economy and capitalism were declared permanent.

However, the world, humanity and fundamental conditions had changed so much that they would never be the same again. Breakthroughs in communication technologies, the Internet and a humanity united on social media both eliminated the monopoly on information and brought different cultures and worlds dangerously closer to each other. The Middle East ceased to be the faraway lands of the Arabian Nights. As a natural consequence of colonialism, hundreds of thousands of refugees rushed to the West and acquired citizenship rights on paper. But the West was caught almost without a strategy and unprepared regarding integration.

Colonizing the Middle East while simultaneously maintaining a pretense of democracy has thus led to a contradictory situation. Human rights organizations and institutions working on immigrants' rights have always clashed with the West's policies toward the Middle East and immigrants. As it was invading Iraq, the U.S. might have focused only on benefits expected to be obtained from the hegemonic move and thought that damages would be limited to Iraq or at most to the Middle East.

Currently we see it proven wrong. When U.S. President Barack Obama began to pull troops out of Iraq - perhaps to compensate for his predecessor George W. Bush's mistake - ignoring potential risks of his decision and actually shirking responsibility by surrendering Iraq to a Shiite dictator who pledged to buy weapons from the U.S., he thought that the problem would be solved or at least brought under control. But pulling out of Iraq without establishing a functioning and democratic order that guarantees the rights of different communities and religious groups in a shrinking world, that is to say, hastily leaving the country without compensating for the damage caused, led to increasingly global and more complicated consequences than it would have done in the 19th century. Indeed, the Islamic State of Iraq and Syria (ISIS) was born out of such a complicated state. Today, the West and Middle East have become mingled with each other. It is equally true for both the immigrants in the West struggling with white racism and for the grieved and angry people in Afghanistan, Pakistan or Iraq who can communicate with every part of the world through smartphones. In fact, the primary recruitment base for ISIS consists of angry, young immigrants' children in the West, who think they are discriminated against and flow into Syria.

If we focus on the events gathered under the headings radical Islam or the underdevelopment of the Islamic world, the problem will continue to grow and, I am afraid, will lead to a World War III. Actually, many experts believe that there is an undeclared third world war going on in the Middle East now.

Therefore, the consensus or concentration of power regarding the shape of the world in the 21st century becomes quite critical in this sense.

In fact, if we try to maintain the same rules in the 21st century as if nothing changed during the 19th and 20th centuries, we will probably have a hell on earth. Both the world and people have changed and it is not possible anymore to rule people with a colonial mentality. We need a revolution of mentality. For a new understanding to emerge, launching a compensation effort in the Middle East and East will be the best starting point.

Continuing to control the oil and natural gas reserves in the Middle East without sending troops, but through fueling sectarian tensions or installing puppets like Egyptian President Abdel-Fattah el-Sissi is similar to dropping a nuclear bomb on Paris, London or New York.

So strong Western nation-states, respected and influential human rights organizations and powerful civil society organizations should devise a strategy with nation-states against global capital, oil and defense companies. There can be a chance for the world for the better if we end the war in Syria, find a peaceful solution to the Palestinian issue and make up for the damage inflicted on the Middle East and East during the colonial era. Otherwise, we will continue to take refuge in the concept of creative destruction. Assuming, of course, there will be still something left to build on after destruction.

If we are not to spend time on utopias, we need to accept the fact that the world needs to be subjected to a functioning order and rules. Turkey has immense significance for putting out the fire in the Middle East and repairing the destroyed bridge between the Islamic world and the West. Especially the lack of appreciation in the West for the Justice and Development Party (AK Party) and President Recep Tayyip Erdoğan, who is pious but endorses Western values, is actually a result of the West's current crisis. However, Turkey is the only country that can talk to, work with or serve as a model and mediator to both the West and the Middle East. Despite that, the West's efforts in recent years to waste, instead of using, this opportunity is really an irrational situation.
Last Update: Oct 21, 2015 2:09 am