Living in a world of ‘video games' 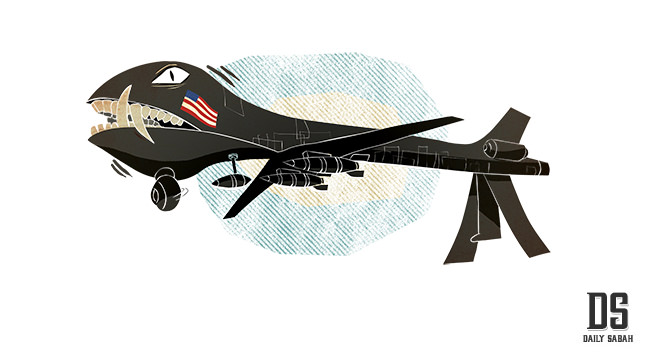 Today's soldiers do not have guns in their hands or fight the enemy face to face, they are lethal bureaucrats who sit in comfortable chairs and with the press of a button conduct drone strikes without regard to humanity

On Oct. 15 The Intercept published online some secret documents related to U.S. President Barack Obama's administration's drone war in Yemen, Somalia and Afghanistan as a part of its counterterrorism policy. Through the information provided from an anonymous whistleblower, there are in total eight papers that explain how the data for the targets are collected, who is considered to be a target and who takes the final decision - the so-called kill chain. "The 'find, fix, finish' doctrine that has fueled America's post-9/11 borderless war is being refined and institutionalized ... these documents lay bare the normalization of assassination as a central component of U.S. counterterrorism policy."

Leaving aside the U.S. case, not later than one day after, an unknown drone claimed by many to be a Russian that violated Turkey's airspace was shot down by Turkish warplanes. At this point, it seems quite impossible to turn a blind eye in front of the red alarm light of the drone war.

According to The Drone Papers, unmanned aerial vehicles (UAV) have become the main tool the Obama administration uses mainly to kill terrorist targets in the Middle East. The U.S. security strategy dominated by the use of drones aims mainly to reduce the cost of war by creating this new method of state violence. Cheap and effective, the drones can track a target's movements for more than 12 hours, and in case it is approved, kill them and their affiliates.

Called also the "joystick war," the drone war has brought new dimensions to modern warfare, particularly in the war against terrorism. First of all, today's soldiers are not the ones who have guns in their hands and fight the enemy face to face, they are lethal bureaucrats who sit in comfortable chairs, mainly in Nevada, and with a press of the button can undertake a fatal strike. There is no longer a traditional battlefield, - as in traditional wars, where the parts involved had the possibility to attack or defend themselves. There exists only one big room with a big screen from which top officials watch as the shot is taken and wait to see if they will gain a "jackpot," as they say when the person they intended is killed.

Another dimension is the so-called everywhere war. Terrorism itself questions borders, but its counter-response challenged them even more. As a counterterrorism strategy, drones chase terrorist and their affiliates everywhere in the world, doing away with all the limitations that could be imposed on them. At this point it could be asked who is chasing whom, and where? While trying to find these answers, which will doubtfully ever be clear, it is important to analyze drone warfare from other perspectives.

Approximately after 13 years when the U.S. conducted its first drone attack in Yemen little attention is given to the outcomes of this war, and more importantly to its future. Looking from a micro point of view, drones seem to be a perfect weapon, as they are cheap and effective. Maybe this is also the reason why drone warfare is seen positively by many citizens, - according to the latest poll, 58 percent approve of drone attacks, and officials in the U.S.

MORALIZING DRONE WARFAREFrom a macro point of view, drone warfare has become more complicated and dangerous from what is presented in daily official discourses. Seen from a humanitarian perspective, there are two main aspects of the law regarding war: "Jus ad bellum" and "jus in bello." While the first one refers to the justness of starting a war, the latter refers to the justness of how the war is conducted. Taking into consideration "jus ad bellum," Obama has said that attacks will be conducted only on those who pose a "continuing, imminent threat to American people," presenting it in terms of the principle of self-defense. This discourse legitimized the attack of al-Qaida and its affiliates. However, the legality of these attacks is questions if we consider "jus in bello".

In a declaration from then U.S. President George W. Bush's White House from May 2003 it was clearly stated that for an airstrike to be approved there should be a near certainty that the terrorist target is present and a near certainty that civilians will not be injured or killed. However, based on The Drone Papers, the standard for civilian casualties concerning the principles of distinction and proportionality are not applied. Instead, an attack could be approved when collateral damage is considered low.

It is really difficult to find reliable sources regarding the number of people who are killed by drone strikes as mostly are classified information. Generally, in official documents the targeted people killed in drone strikes are called "objectives" and "enemies killed in action" (EKIA) is sometimes used for non-targeted casualties. As such, a very small number of people are considered to be civilians.

Nevertheless, if we have a look at the data provided from the Bureau of Investigative Journalism for the period from 2002 to 2015 in Yemen it is estimated that 648 to 1,576 people have been killed in 122 to 295 strikes conducted. From these, 133 to 161 were civilians and 34 to 46 were children. At this point, it is difficult to say that drone strikes do not violate the principles of distinction and proportionality.

Maybe this view could be challenged by arguing that the collateral damage is proportional to the threat that the objectives pose to U.S. security, and maybe it would be difficult to oppose this argument as long as the civilians killed are labeled EKIA.

Leaving aside the numbers, there are two other arguments that indicate the violation of IHL by drone strikes. Firstly, drones rely mostly on intelligence signals and as showed in The Done Papers, the real target is the phone rather than the person itself. Considering this, the accuracy of drone strikes is in question. Secondly, the indiscriminate nature of drone strikes can also be seen in the so-called signature strikes and double tap strikes.In 2012, Obama approved signature strikes, which allowed for the killing of an objective taking in consideration the patterns of life without being 100 percent sure of the identity of the targeted person. On the other hand, double tap strikes seem to be even more hazardous. A double tap strike consists by two strikes that may have a few seconds or a few hours between them. After the first strike many people, mainly civilians, run to help the injured, but when the second strike hits it results in a very high death toll.

THE DRONE ARMS RACEWhen looked at from a political perspective, drone warfare creates a security dilemma among states, challenging security. The Drone Papers brought this mainly in U.S. policies to attention- and somehow in British policy as well. We should not let out of sight that currently there is a silent drone arms race going on in the world.

It is estimated that approximately 90 states operate drones, 30 of which operate or seek to develop armed drones. The U.S., Britain and Israel are the main known states that operate armed drones. But last month Pakistan also joined the group using drones to kill enemies within its territory. Adding here also the last violation to Turkish airspace by the unknown drone, it is undeniable that these are real threats to security and stability around the world.

It is important to highlight that drones and the states that use them neglect the sovereign borders of states in which they are used. Sometimes when drone attacks are conducted, the respective governments are aware and notified about it beforehand. However, this is considered to create a strong opposition against the government, like in the case of Pakistan, creating more instability within the attacked state. In the case of Yemen, when Abd Rabbuh Mansour Hadi was president, U.S. officials would generally give notification before any possible attack, but following the civil crisis and the power vacuum created thereof, no one has any clear information about impending attacks. Considering this, it would be useless to question whether drone attacks are aggravating the instability disseminating most Middle Eastern countries.

* Assistant to editor-in-chief of Insight Turkey/SETA