Implications of US navy patrol in South China Sea 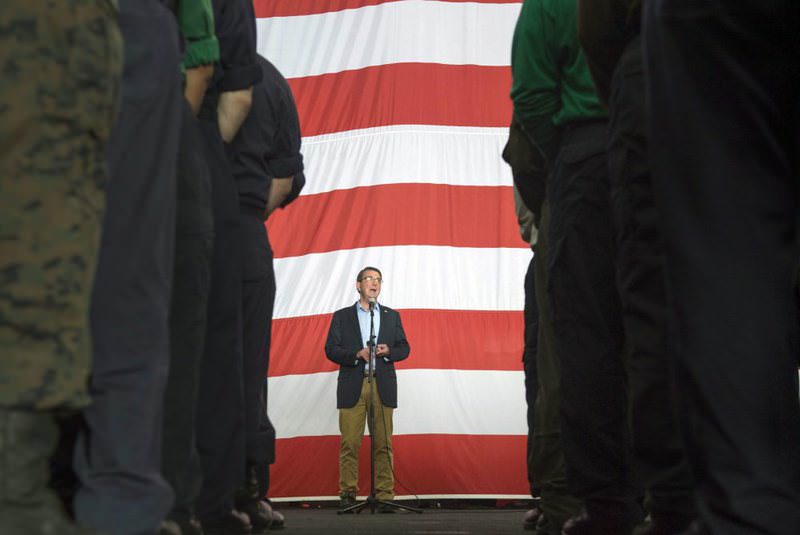 U.S. Secretary of Defense Ashton Carter speaks with U.S. service members aboard the USS Theodore Roosevelt on a visit to the aircraft carrier in the South China Sea.
by Javed Zafar
Nov 07, 2015 12:00 am

The latest patrol by the U.S. navy in the South China Sea where China's maximum oil and gas imports come through has harmed the relations of the two powers, which are large trade partners

The U.S. has finally started a naval patrol in the South China Sea apparently to use its rights of navigation in international waters, contested by China. The naval patrol in the disputed international waters came to defend the U.S. position and prestige after China's creation of artificial islands and a massive military buildup in the disputed South China Sea. The U.S. challenge to China's position has come at a time when the U.S. is already engaged in Eastern Europe and the Middle East. The South China Sea is part of the busiest trade routes of the western Pacific with annual trade income of $7 trillion. China's maximum oil and gas imports come through this route. The U.S. military presence in North Korea, Japan and the Philippines has given the U.S. an upper hand in the region's security architecture. By making an artificial island in the South China Sea, China is not only trying to challenge U.S. military supremacy in the region, but is also increasing its operational range up to the Strait of Malacca, which gives it a military advantage in any potential future conflicts with its regional allies.

The dispute's significance lies in the region being a potential reservoir of huge oil and gas resources. For China's large economy, this reserve will be the greatest source of energy security. For similar reasons, the U.S. is also vying for this region and it also has an additional impetus of protecting the security of its allies like Korea, Japan and the Philippines. This is the first time China is confronting the U.S. position in the region. It did not even consult any regional or Association of Southeast Asian Nations (ASEAN) countries before building the islands in South China Sea. It even ignored concerns raised by the U.S. or by international organizations about China building these islands.

The region of the South China Sea has been a contested issue historically, with countries like Vietnam, the Philippines, Brunei, and Malaysia laying claim to it. Each country claims historically and legally that they have the right over the region. It has even led to clashes between China and some of these countries. Recently a Vietnamese navy boat was sunk by the Chinese navy.

However, the Chinese argument is that the U.S. itself has been violating and misusing international maritime laws, so the U.S. cannot dictate how China should behave on sea. In July 2015 the Philippines went to the United Nations Convention on the Law of Sea the (UNCLOS) for arbitration, but China refused to appear before the tribunal. China not only refused to appear, but also said that this case does not fall under the UNCLOS jurisdiction. After China refused to appear before an international court, in order to deter China the U.S. started to patrol the region to protect it and its allies' interests. By undertaking a naval patrol in the disputed area, the U.S. wants to protect the basic right of free and uninterrupted navigation of its aircraft carriers and trade vessels. The second concern is about an increased security threat to the U.S. and its allies in the region in the presence of China's permanent military presence on these islands, either artificial or natural. The U.S. also wants to resist China in the East China Sea as it is using the same tactics against Japanese and South Korean claims. The potential for hydrocarbons is a serious concern for the U.S. and it wants to control the region's hydrocarbon reserves through direct pressure on China or through allies like Vietnam and the Philippines. If China successful creates its own security zone, exclusive economic zone and air defense identification zone in the South China Sea in spite of the U.S. military presence in the region, it could have global impacts resulting in ultimately diminishing the U.S. status of being the world's single superpower, with serious threat to U.S. interests.

With this patrol the U.S. is cautiously trying to draw a line for China without demonstrating military power. The U.S. has described the sending of the USS Lassen to the region as part of its patrolling and has also announced surveillance plans. The U.S. will probably continue its patrolling in a defined time without much provocation so that China will come to negotiate its claims in the region. To assert its position, U.S. Secretary Defense Ashton Carter has made three visits to the region in the last eight months. On his visits his focus is on wider consultation with his ASEAN partners instead of Chinese officials.

Similarly, the Chinese response is still limited in diplomatic reactions by summoning the U.S. envoy to register its protest. Chinese media and policy experts also criticized the U.S. patrol and called it an act of aggression. Chinese commentators also advised their government not to take any action that would result in an armed clash. To counter China in the region the U.S. is not only working with regional countries, but also engaging India. Indian military exercises with Australia, Singapore, Japan and the U.S. at a different time can be seen in this context.

Despite a U.S. warship patrol and continued announcement of patrolling the South China Sea, the status quo has been maintained in the region, and it has gone in favor of China. China already has built an airstrip, deployed weapons, built a light house and has been extracting oil in the disputed area. China has also announced that soon it will establish an air identification zone. Now the important question is if this type of patrolling can change China's behavior or not. If the U.S. limits itself to patrolling 12 kilometers away from the disputed islands, it will not change anything in the region.

The Global Times, a semiofficial Chinese newspaper, claims that the U.S. has no card to play except to send its patrol ship. The paper also advocates for China's plans of further land development. As of now, the U.S. has failed to change the status quo, and in near future it will not be able to change it without the possibility of military confrontation. In order to avoid that, whether the U.S. could impose economic sanctions on China is also not an easy option to consider. With China and the U.S. as large trading partners, a military confrontation or economic sanctions would also hurt the global economy. Perhaps China has taken advantage of these limitations. By undertaking a naval patrol, the U.S. has started testing the waters for Chinese preparedness and increasing regional support for the U.S. may isolate China and diminish its regional and international standing. With the objective of isolating China, the U.S. may force China to not reclaim more sea and come to a regionally negotiated settlement of the crisis.