For a new era of cooperation 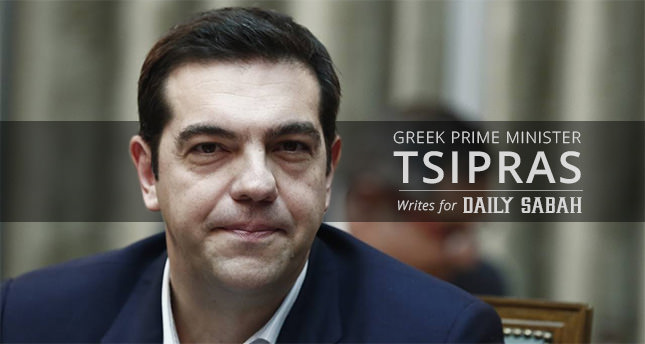 |AP Photo
by Alexis Tsipras Nov 17, 2015 12:00 am
The times are difficult for peace and stability in our region. They call for a new level of communication and contact among countries that have the capacities and the will to ensure it based on trust and aimed at cooperation - whenever possible, not only when necessary - founded on international law.

My visit to Turkey on Nov. 18, upon the invitation of the Prime Minister Ahmet Davutoğlu, will be an important opportunity for reinvigorating relations in this direction, particularly in the context of the growing refugee and migration crisis we face. It will allow us to discuss our cooperation in the important multi-faceted challenges of our region.

- Security challenges: In the past few days we condemned together the heinous terrorist attacks in Paris, as we had done before for attacks in Istanbul, London, Ankara, Madrid, Suruç and Mosul. As we condemned the barrel bombs in Damascus, the chemical weapons attacks in Iraq and the state executions in Libya. Facing the pseudo-dilemma between militarist dictatorships and violent Islamic fundamentalism, our choice is clear: We reject both.

We must stay united and determined against forces that use terror to strengthen their power. At the same time, we need to renew our efforts for peace, stability and reconciliation in Syria, Iraq, Libya and Ukraine, as well as initiatives for conflict resolution and economic development in Africa. On our own, but also as U.N., Organization for Security and Co-operation in Europe (OSCE) and NATO members, we cannot found our engagement with our region on forms and actions that flagrantly failed in the past. War cannot lead to solutions, nor can it open the way to democracy. Actions that truly aim in this direction have to be considered and co-decided also by those actors who know better the dynamics of the region. That is why we need to deepen our bilateral, regional and multilateral dialogue and coordination on these issues.

At the same time, we need to recognize the importance for our region and our bilateral relations of reaching a just and viable solution to the Cyprus issue on the basis of U.N. decisions: A free, united EU member state, ensuring security and prosperity for all its people - Greek Cypriots, Turkish Cypriots and other communities - without anachronistic post-colonial arrangements. In these efforts we must not waste the hope and the momentum built on the island.

Finally, security in our region cannot be ensured without security in the Aegean. This cannot be done under threat of war or through increased Greek airspace violations. One of the first steps of this government was to agree with Turkey on the revitalization of the dialogue for confidence-building measures. We need to expand on this dialogue and work on the exploratory talks on the continental shelf. Only by ensuring good neighborly relations on the basis of international law can we build solid foundations for our future cooperation.

- The refugee and migration crisis: It is clear that without peace in Syria and Iraq and stability in Afghanistan, there is no prospect for the return of the citizens of these countries to their homes and an end to the refugee and migration crisis we face. So it is imperative that we work together on how we can address the issue of the management of these flows in a humane and effective way. Turkey, together with Lebanon and Jordan, has taken the enormous social and economic burden of supporting millions of refugees and migrants all these years. At the same time, the 650,000 people that have crossed the Greek-Turkish borders in the last months have created an unsustainable situation in Greece and Europe in general. The Greek people and authorities, despite great economic challenges, do all they can to manage these flows and give support to those in need. In this context it is very important that we move forward on a substantial agreement between the EU and Turkey on managing these flows within the country, on supporting migrants and on a robust resettlement mechanism for the legal entrance of refugees to third countries. A crucial component of this agreement, though, is about enhancing Greek-Turkish cooperation. We need to talk more about how to fight trafficking networks, implement our bilateral readmission agreement and how to coordinate and cooperate on the level of migration, police and coast guard authorities.

- Economic development: Greece and Turkey have a crucial role in connecting three continents through creating new networks in energy, transport, tourism, culture and commerce, particularly at a time when connectivity is more central than ever in overcoming current economic crises and averting future ones. Our bilateral High-Level Cooperation Council is an important tool in this regard. For its future fourth meeting we must concentrate on a few but substantial forward-looking agreements in the areas above.

Turkey's EU accession process is particularly important in this broader context, including also for the promotion of democratic reforms. Greece supports this process, recognizing its mutual benefits for the EU and Turkey as well its importance for bilateral relations and the broader region.