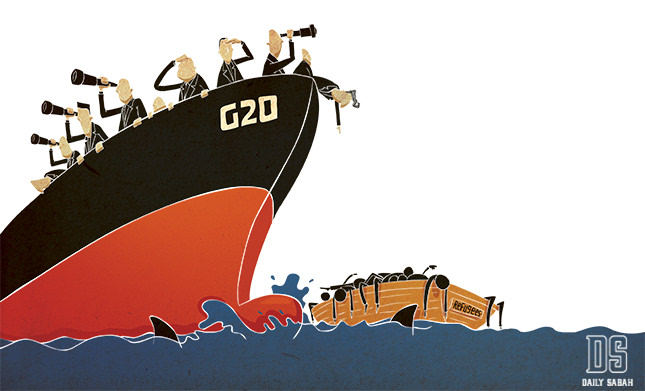 The A20 platform, established under the G20, plans to benefit from the contribution of academics to strengthen the group's policymaking for global problems and act as a more efficient communication body between countries

After the global financial crisis that emanated from the U.S. in 2008, the world has come to agree that global problems can be solved through global actions. In these difficult days, the G20, whose foundations were laid in the 1990s as a council of the economic staff of the 20 most developed countries, became an effective platform to overcome a variety of problems. For this new situation, the G20 has set itself two priorities. The first one is to abolish the fragilities that caused the global economic crisis and the second one is for G20 countries to contribute to strong, sustainable and balanced global growth.

Based on these principals, the G20 has a place in improving the global economic crisis, albeit limitedly. This situation built positive public opinion that suggests the G20 can be a source of solutions for political problems on a global scale.

Along with these positive developments, insufficient representation in the decision-making mechanisms of G20 assemblies constitutes one of the most important problems. Besides, because policies created under the roof of the G20 are advisory, it is up to the countries to apply them and properly convey the decisions that were made to the public, which creates great difficulties. The fact that the executive boards in which member states are represented in the institutionally structured IMF and World Bank are not present in the management structure as well constitutes a reason for the aforementioned problems and it prevents work from being rapid and sustainable.

3I AND A20Turkey's term chairmanship collects the work that can help abolish these issues and is also inclusive in that it assures sound growth under three main titles; implementation, investment and inclusiveness.

G20 participants have performed important work so far in designing and creating political frameworks in many fields. Particularly, nearly 1,000 policies were committed to in the Brisbane Action Plan last year. If these decisions are realized by 2018 as laid out, they will increase global output by more than $2 trillion and it will generate millions of additional employment opportunities. Turkey is endeavoring to turn these promises to practice. Another important subject is that Turkey is trying to conduct works on meeting the investment deficit of member countries with concrete and assertive investment strategies by giving importance to investments, an important element of growth, and by developing a new method on further improving ongoing work.

Lastly and most importantly is inclusiveness. Categorizing this title both locally and globally, Turkey is searching in the local arena for formulas that will assure that all segments of society benefit from the utilities of growth and welfare. For this purpose, there is an ongoing effort to open a special field in working areas regarding all matters on small- and medium-sized enterprises (SMEs). In this context, we will fulfill our commitment to provide gender equality in employment. Also, the employment of young people bears great significance. Therefore, Turkey is aiming to appeal to the majority of our citizens regarding the discussions in the G20. As for the international arena, the difficulties met with by low-income developing countries will be voiced louder. This is one of the features that determined the term chairmanship of Turkey.

Led by nongovernmental organizations, G20 platforms like the Business 20 (B20), Civil Society 20 (C20), Think Tank 20 (T20), Labor 20 (L20) and Women 20 (W20) were established to benefit the decision-making processes of certain segments of society. In addition to these platforms, the Academy 20 (A20), as a platform that will ensure the direct contribution of academics to help convey the decisions made to the wider public as well as helping make policy more accurate, is materializing.

This platform plans to continue its operations under the G20 roof as an international platform that aims to become a global council and communication organ to bring a more just and efficient management system to the table. Academics and intellectuals are represented at the top level along with governments of the G20.

Also, the A20 platform plans to intensify its works in light of the four main visions. The first one is a questioning and enrichment of the structure of the G20 through an academic perspective. The second is to lend intellectual knowledge to global justice, welfare, sharing, peace and good management. The third one is to help academia get into the habit of producing concurrent solutions that will support policy-makers for global problems, and finally to make G20 policies more sustainable by using the features of international variety and concept production within the academy.