An urgent strategy for ending the Syrian war: Clausewitzian moment 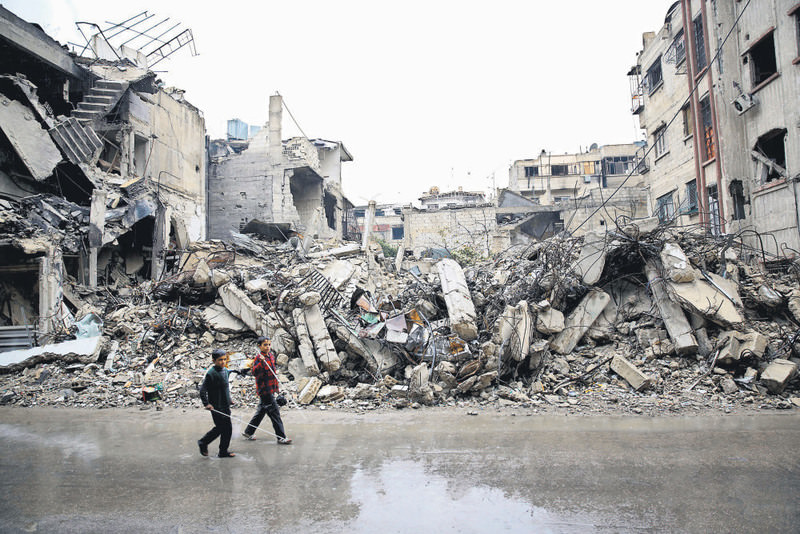 Syrian children walk past the rubble of destroyed buildings in Douma, an area held by moderate groups in the east of the Syrian capital Damascus.
by Necmettin Özdin Nov 20, 2015 12:00 am

The G20 summit hosted by Turkey began in Antalya under the shadow of the Paris terror attacks. These attacks turned all the attention to terrorism and other related serious affairs of refugees and the Syrian crisis. President Recep Tayyip Erdoğan and U.S. President Barack Obama came together and discussed the next urgent steps to be taken in the fight against DAESH during bilateral talks on Sunday. "We are faced with collective terror in Paris just like in Ankara, Gaziantep, Suruç and Diyarbakır in Turkey," Erdoğan said. "The discussion we had today I think was very helpful in helping continue to coordinate work that we are doing together, to help to fortify the borders between Syria and Turkey that allow DAESH to operate," Obama said.

Obama and Russian President Vladimir Putin also discussed a new proposal to the Syrian conflict. As reported by the Washington Post, Obama and Putin had agreed that Syria needs a political transition led by Syrians, preceded by negotiations mediated by the United Nations and a cease-fire. Obama and Putin have long been at odds about whether Syrian President Bashar Assad can maintain a role following that transition. Putin's foreign affairs adviser, Yuri Ushakov, told reporters that Putin and Obama had a "quite detailed conversation" talking about Syria most of the time. He said they talked about the terror attacks in Paris and other terrorism-related issues. "Strategic goals related to fighting ISIL [DAESH] are very close, but tactical differences remain," Ushakov said.

At the latest meeting of the U.N. General Assembly Putin called on all global and regional actors for a common platform in order to fight against DAESH and other groups on the ground in the Middle East. As reported by The Washington Post on Sept. 28, this is such a call for the bygone days of the Yalta Conference including all kinds of actors against Nazism, whether democracies or dictatorships. Then he asserted: "The West is making an enormous mistake by not cooperating with Syrian President Bashar al-Assad in the fight against the Islamic State militant group [DAESH]." This statement constitutes the basis of Putin's strategy, including Moscow's air campaign in Syria.

As former U.S. Secretary of State Condoleezza Rice and former U.S. Secretary of Defense Robert M. Gates noted: "The fact is that Putin is playing a weak hand extraordinarily well because he knows exactly what he wants to do. ... He is defending Russia's interests by keeping Syrian President Bashar al-Assad in power." They also made clear that there is a huge difference on the definition of success between Americans and Russians who never bother with communicating and supporting failed states like Georgia, Ukraine or Syria. What is missing is that Americans have to create their own facts on the ground. The idea of no-fly zones is not half-baked, as it worked well before against the regime of Saddam Hussein in Iraq. What is also certain now is that the Russians are well aware of their objective, which is to secure the interests in the Middle East by any means necessary.

In a broader sense, what is clearer day to day with the political objectives of the Russian military intervention with airstrikes, as Michael Kofman said: "Russia seeks to destroy anti-Assad forces, leaving no alternatives apart from the Syrian Army and jihadists. For the United States, that effectively will make the already dubious notion of supporting moderate forces in Syria impossible. This, in turn, will mean Saudi Arabia and other Sunni states may have to go it alone in this proxy war, a problem more manageable for Russia and Iran. As a result, Russia will accomplish its goal: ensure that the Syrian regime is the only legitimate and viable actor in Syria worth backing." This also indicates that Russia from the beginning had a simple target and now also has the more realistic end of keeping the Assad regime alive with its limited means. The balance of power has changed with

Russia's active engagement in Syria, which was a clear message to opponents of the Assad regime. As David Rothkopf put it: "Putin's long-term motives in Syria remain misunderstood by many in Washington. They do not seem to understand that he does not seek to transform the country ... He simply seeks to ensure that the regime in Syria's capital is acceptable to him."

Conversely, Obama's strategy has never included an interventionist approach to the regional issues except in Libya and Syria. The U.S. is likely to invest in regional actors in efforts to "degrade and ultimately destroy" DAESH, which was the only target of the Obama administration. Indeed, Obama has been unwilling from the earliest days to carry out any attempt and responsibility with its first and foremost ally, Turkey, in the region. With Assad's surprisingly sudden visit to Moscow, he and Putin agreed on the same target that aims to keep the regime in Syria, propping Assad up against the opponent groups and allowing the regime to survive. "The talks focused on fighting terrorist extremist groups, carrying on with the Russian operation and support for the Syrian army's offensive," Kremlin spokesman Dmitry Peskov told journalists in Moscow. All this indicates the continuation of the Russian strategy shaping its foreign policy approach from the Ukrainian crisis to the Syrian war.

No single actor has or will have a role that can change the course of events in the region. From now, it is not easy to predict whose or which strategy works on the ground since it is an open-ended process and will likely continue to remain at the top until there is a broader consensus between the actors. Simply put, strategy is all about how to fight, conduct oneself and win at the end. Then, the question addressed by Stephen M. Walt in his column in Foreign Policy of whether Obama or Putin is a better strategist, is likely to answer those who consider Putin an adventurer while the Russian economy has been facing serious problems under mismanagement. But for others, Putin is trying to do his best in order to reach his political ends with the means in his hands. This point is clear in Prussian General and Military Theorist Carl von Clausewitz's words two centuries ago that "no one starts a war - or rather, no one in his senses ought to do so - without first being clear in his mind what he intends to achieve by that war and how he intends to conduct it."

Recently, there are some crucial signs indicating a strong basis for cooperation between the U.S. and its 60-year alliance with Turkey. The Foreign Ministry said on Thursday that it welcomes the recent remarks from Pentagon spokesman Colonel Steve Warren regarding the U.S. "as for now" not providing weapons or ammunition to the People's Protection Units (YPG), the military wing of the PKK-affiliated Democratic Union Party (PYD) in Syria. Obama declared on Russian aggression in Syrian: "Mr. Putin had to go into Syria not out of strength, but out of weakness, because his client, Mr. Assad, was crumbling." Despite the honeymoon years of Chinese-Russian relations based on the deals from natural gas and currency exchange to a joint military exercise, China is signaling that it will not enter such a partnership that would cause "an increasing diplomatic cost for China, as Russia has grown assertive in ways that have threatened the interests of Beijing's commercial partners from the Middle East to Ukraine," Colum Lynch explained. Under the circumstances in which Russia deployed its warplanes and bombed all the groups on the ground, what we urgently need is a convincing argument and clearer strategy, including coordinated tactics between the partners and alliances as well.

To sum up with Clausewitz: "War is nothing but the continuation of policy with other means." "[T]he political object" he said, "as the original motive of the war, will be the standard for determining both the aim of the military force and also the amount of effort to be made." Last, but not least: "The smaller our political object, the less value shall we set upon it, and the more easily shall we be induced to give it up."