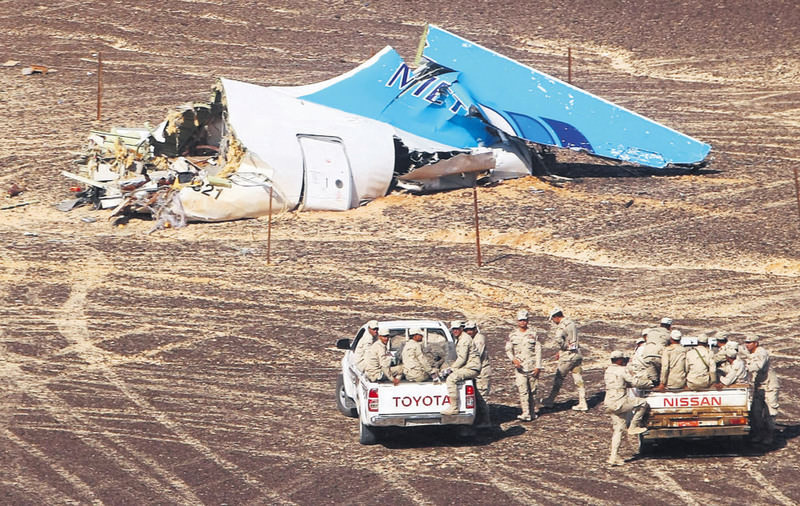 There were past and present indicators that Sharm el-Sheikh was a target, and the failure of the security services to stop the attack appears to be unambiguously stark

Revelations that a bomb almost certainly brought down the Russian Metrojet Flight 9268 over the Sinai Peninsula are unlikely to affect Russia's muscular interventionism in the Syrian civil war. From Chechnya to Georgia to Crimea, Russian President Vladimir Putin has shown that he is not a man to walk away from a fight. On the contrary, expect the Russian government to spin the tragedy in such a way as to legitimize its actions in Syria, ramp up jingoist rhetoric and rally the troops round the flag.

It is also worth noting that Russia has been facing down such threats for decades. The bloody denouements of the 2002 Moscow theater siege and the 2004 Beslan school massacre are both indicative of the Russian government's resolution when confronting terrorism regardless of how reckless, cavalier and ultimately deadly its actions may be. During the theater siege, for instance, not only were all the Chechen attackers killed, but around 130 hostages succumbed to gas that was pumped into the theater as well. Similarly, over 330 people died, most tragically including 186 children, when Russian Special Forces attempted to storm the hostage site at Beslan. Thus, in this light, it would seem that, far from cowing Putin, it is more likely that the Russian military will intensify its attacks against DAESH – or redirect its attacks away from Syrian opposition "moderates" to DAESH, depending on who you believe – in search of revenge.

While unlikely to affect the scope of Russian intervention in Syria, it is however likely that the attack will engender a number of political and economic repercussions. First, if the attack is proven to be the work of DAESH then this seriously undermines Western claims that Russia had not been attacking DAESH, but rather focusing its attention on "moderates." Clearly, DAESH must have been feeling the hurt if it was willing to risk Russia's wrath further by bringing down a passenger jet filled with Russian citizens. Given that this attack would not have taken an insubstantial amount of time to plan and execute, DAESH must have been feeling the pinch right from the beginning of Russia's actions in Syria. Perhaps this revelation and the mutual foe represented by DAESH will lead to an assuaging of tension between Russia and the West in Syria. Already it has been reported that there will be increased intelligence sharing concerning potential terrorist threats.

Second, the attack is highly embarrassing for the Egyptian government and President Abdul-Fattah el-Sissi in particular. In the absence of an Egyptian economic recovery, Sissi's domestic policy has squarely rested on the idea of combating terrorists, although much of this focused on the alleged, that is to say, fictitious, militant threat posed by the deposed Muslim Brotherhood. Not only is the downed airliner evidence that Sissi has demonstrably failed to address the threat posed by the DAESH-affiliated DAESH Sinai Province, but also the bombing will further undermine Egypt's already moribund tourism industry upon which much of the economy is dependent.

The attack also raises a number of security questions. On the one hand, the success of the attack is unsurprising in itself. Anyone who has traveled through a regional airport, whether in a developing country like Egypt or elsewhere, is well aware that security standards can be somewhat uneven or even lax. Indeed, the British press has reported that CCTV cameras at the Sharm el-Sheikh airport are often left unmonitored, and this is for the cameras that actually work. It has been reported that many CCTV cameras at the Sharm el-Sheikh airport do not work. The Sinai Peninsula, moreover, has long-been an area of unrest and a number of militants there have pledged themselves to DAESH.

On the other hand, Sharm el-Sheikh has been the target of terrorist attacks in the past and is a popular tourist destination for Russians and Westerners alike. In 2005, for instance, attacks by Islamic militants killed some 88 people. In this light, one might think that security would be up to scratch. The British government has also confirmed that a British passenger jet was recently forced to take evasive action after being targeted by a missile near Sharm el-Sheikh only two months ago.

In other words, there were past and present indicators that Sharm el-Sheikh was a target. This is especially the case if we consider the presence of both large amounts of Russian tourists and a DAESH affiliate in Sinai at a time when the Russian air force is bombing jihadists in Syria. Given the combination of all of these factors, the failure of the security services to stop the attack appears to be unambiguously stark.

There is, however, another explanation beyond a security failure. What if this was not a failure to screen passengers and baggage adequately? What if the bomb was planted by someone in cahoots with DAESH possessing relatively unfettered access to the plane such as a cleaner, baggage handler or security guard? That is a far more worrying explanation. Whatever the case, let's hope that this tragedy will not only act as a wake-up call to improve security at regional airports, but that it will also lead to increased measures to adequately vet exactly who has easy access to airliners.

* Dr Tristan Dunning is an honorary research fellow at the School of Historical and Philosophical Inquiry at the University of Queensland in Australia and publisher of Hamas, Jihad and Popular Legitimacy: Reinterpreting Resistance in Palestine​
Last Update: Apr 05, 2016 10:46 am
RELATED TOPICS