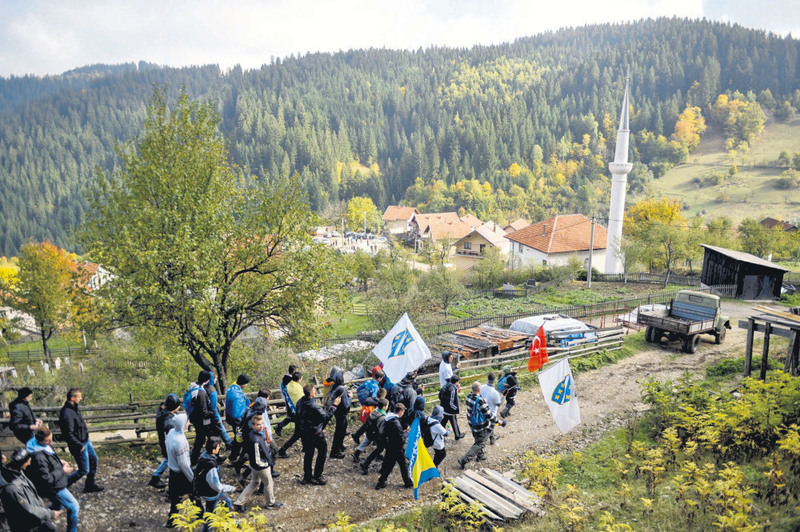 The 39 Bosnian civilians killed by Croatian soldiers on Oct. 23, 1992 were commemorated in the village of Stupni Do near Vares in Bosnia-Herzegovina by Turks and Bosnians.
by Kemal Obad Nov 23, 2015 12:00 am

The strong partnership between Turkey and Bosnia-Herzegovina, sharing a common history, religion and culture, will be key in reshaping the global system thanks to their (geo)political positions

In the heart of Europe, Bosnia-Herzegovina has been considered a crossroads for different cultures and religions throughout its history.

However, Bosnia-Herzegovina is also often described as a significant geopolitical space for world powers. When attempts to set up the peace by European states became unsuccessful, the United States, led by then President Bill Clinton, decided to intervene to end the conflict. The Clinton administration also wanted to strengthen U.S. presence after the signing of the Dayton Accords, the peace agreement signed in Ohio in 1995 that formed the current constitution of Bosnia-Herzegovina. During this period, the question of Russia's future position in world affairs also became crucial since the country was considered a political and legal successor to the Soviet Union.

In the process of geopolitical revival during the last decade, Russia had a small, but significant interest in Bosnia-Herzegovina. However, this interest was especially focused on the entity of Republika Srpska, where a majority of the population is of Serbian ethnicity and Orthodox. The reason is simple, as Russians share deep connections with Serbs in the Balkans and cooperation is very important for future relations. Russia is also aware of the U.S. influence and presence in Bosnia. American organizations such as the U.S. Agency for International Development (USAID) and the Center for Civic Education are very active and have implemented many projects to support democracy and civil rights. The U.S. Embassy in Sarajevo also has a significant place in the political space of Bosnia-Herzegovina. The embassy has issued many statements in the past regarding the specific political, economic and educational issues in the country and it has strong cooperation with nongovernmental organizations.

The U.S. fully supports Bosnia-Herzegovina in the process of euro-Atlantic integration. As is known, Russia is skeptical about NATO enlargement in the Balkans. In the case of Bosnia-Herzegovina, Russia has said that NATO expansion is the country's internal issue, but at the same time expressed the view that forcing enlargement does not contribute to the strengthening of security, which could produce political conflict between NATO member states and those that are not.

Last year a discussion about Bosnia-Herzegovina's future showed the importance of this country in the current European and global political circumstances. British Foreign Minister Phillip Hammond and German Foreign Minister Frank-Walter Steinmeier suggested a new form for the country's integration process to European Union. They presented a list of economic and social reforms that are needed and are crucial in order for Bosnia-Herzegovina to speed up its transformation into a country that is suitable for the European Union system. The initiative was supported by the U.S. State Department as well as EU High Representative for Foreign Affairs and Security Policy Federica Mogherini as one the most significant reform proposals for economic improvement in Bosnia-Herzegovina. Indeed, in the last few months many new reform laws have been adopted, despite the critical position of opposition parties.However, at U.N. Security Council meetings last year Russia abstained in the voting for extending the one-year mandate of the EU Force (EUFOR), whose mission is to maintain stability in Bosnia-Herzegovina. For Russians, it was unacceptable that Bosnia-Herzegovina is being pushed in the direction of the EU. This was surprising for European and American diplomats, and many of them, such as Philippe Bertoux, said that Russia is trying to import the bad atmosphere in Ukraine to an unrelated issue. In February 2015 relations between Russia and Bosnia-Herzegovina were also at stake when the 5 million euro arms deal with Ukraine was blocked by the country's former minister of trade. Due to Russian pressure, the contract eventually was not implemented.

In July of this year Russia vetoed a U.N. resolution that would have condemned the 1995 Srebrenica Massacre during the Bosnian War as a "crime of genocide." It was seen as Russian support for the Serbian position on the Srebrenica Massacre. U.S. politicians condemned Russia's subjective approach to the very sensitive topic.

TURKEY AS A GEOPOLITICAL MEDIATOR

But between U.S. and Russian influence in Bosnia-Herzegovina, Turkey is another geopolitical actor that has strong connections with and impacts on many educational and cultural organizations. Turkey's investment in the Balkans is especially focused in Bosnia-Herzegovina, as the two countries share historical, cultural and trade ties. Therefore, is it essential to know and understand why Turkey is a very important mediator between different geopolitical interests of global actors such as the U.S. and Russia.

Turkey, as a NATO member, has good relations with the U.S. government, but has strong ties with Russia as well. Its cooperation with EU has upgraded in last few months, especially because of the refugee crisis. Turkey's diplomatic correspondence between its allies to the west and east would be helpful for the political position of Bosnia-Herzegovina in international organizations, since Turkey is seen as a close partner. It will also be a challenge in the future, because of the complicated governmental system in Bosnia-Herzegovina and its inability to clearly position itself within international relations.

Today Bosnia-Herzegovina is in the triad between geopolitical influence, interests and activities of four global geopolitical actors - the U.S., EU, Russia and Turkey. These actors see Bosnia as strategic state in maintaining the security and stability in region. Balance of power and influence in Bosnia could represent geopolitical impact of world powers on the entire region. Because of its intercultural and political circumstances Bosnia is geopolitically relevant today. Thus, Bosnia-Herzegovina has the opportunity, balancing between its internal interests and its place on the international level, to improve and enhance its social, economic and political reputation and status. Certainly, a strategic assistance and support of Turkey will be necessary in this process.