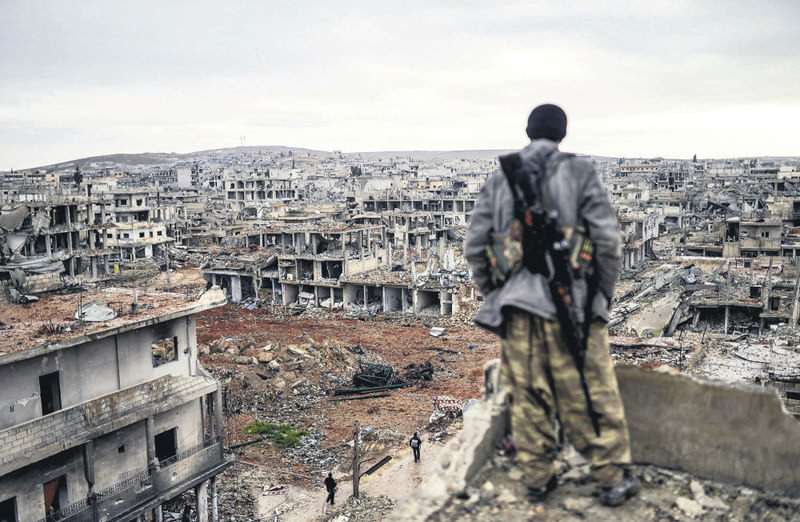 The war in Syria has not only led people to flee their homeland, but also caused monumental damage to many buildings and cities.
by Merve Çalhan Dec 08, 2015 12:00 am

Despite the country's importance in the region, Putin has initiated an anti-Turkey campaign because of Turkey's rightful response, as per international law, to Russia's violations within its borders and airspace

After the downing of the Russian jet on the Turkey-Syria border and since 1952, the gradually improving relations between Syria and Turkey have taken a nosedive as a result of recent, sweeping sanctions; namely, banning the import of consumable Turkish goods, banning charter flights and halting talks with Ankara on the Turkish Stream Gas Pipeline. Apparently, Putin is vowing to impose more sanctions on Turkey in revenge for the downing of a Russian plane, which violated Turkish air space. In the first hour of the Russia-Turkey crisis, both sides exerted efforts to label themselves as the victim of the incident in the eye of the international society, which Russia has always strived to be part of. While the pilot of the Russian jet said he was not issued any warnings by Turkish officials and that there was no way the jet could have violated Turkish airspace, Turkey said that fighter jets followed the Russian jet for about five minutes and issued 10 warnings before making the call to shoot down the jet.

Although Turkish military sources have shared the images of the Russian jet violating the air space, Vladimir Putin called the incident a "stab in the back" by accomplices of terrorists, saying there would be consequences. It was, rather, a process of psychological warfare for both sides, with Russia being the one to amplify the crisis with the launching of economic sanctions against Turkey to make his voice heard and to exert his economic power throughout international society. Now, Russia is expanding its military base - located in Central Syria just to the southeast of Homs - at the current Syrian military base of Shaayrat to exert its military power. Even though Turkish officials have defended their actions and Turkey's President Recep Tayyip Erdoğan refused to issue an apology to Russia, Erdoğan announced that Turkey does not want to escalate tensions any further and will not retaliate against Russia's imposed sanctions. Putin's current move is a guilt reaction, considering that Turkey warned Russia about airspace violations several times back in October. It is well known that Russia has been conducting airstrikes in the coastal province of Latakia, Syria since Sept. 30. Following the infringement of Turkish airspace, Prime Minister Ahmet Davutoğlu underlined that in terms of airspace violations, Turkish armed forces were clearly instructed to "intercept." So, why has Russia continued violating Turkey's airspace, almost persistently?

In order to comprehend the main reason for Russia's aggressive stance in the Middle East, one should go back in time to 1989 when the last Soviet soldier withdrew from Afghanistan following the 10-year Russian occupation at the invitation of the Afghan government. It could possibly be called a swamp for the Soviet Union, which caused the deaths of more than 10,000 people; not to mention the military and diplomatic costs of the war (such as training and equipping troops with weapons and establishing training centers and so forth). Throughout the war, the Soviet Union fought against insurgent groups (Mujahideen) who received large amounts of aid, economic assistance and military equipment training from the U.S., China, Pakistan and several Arab countries. To weed out the insurgent groups, the Soviet Union benefited from KHAD (The Afghan Secret Police) to gather intelligence and ignite divisions among the groups to render them completely useless. By the mid-1980s, Mikhail Gorbachev announced the withdrawal of his forces from Afghanistan because of the high cost of the war to the Soviet Union. Nevertheless, Yuri Krupnov, who is the State Advisor of the Russian Federation and is current head of the Development Movement and chairman of the Supervisory Council of the Institute for Demography, Migration and Regional Development, points out that withdrawing from Afghanistan and then from Central Asia and the Caucasus was a huge mistake which allowed the U.S. and NATO to gain ground; namely, military presence in Afghanistan, where the U.S. has 13 military bases.

Moreover, he also raised a rather provocative issue by making a huge claim that the disintegration of the USSR was sparked by the failure of military operations in Afghanistan. The restoration of Russia should have begun with the industrialization of Afghanistan. Now, Russia is on the verge of turning into a member of international society, which has evolved from its political and diplomatic European roots and ideological reflexes and should avoid repeating the same mistake it experienced in Afghanistan. Russia has recharged its batteries and gotten back its debilitated strength after the Cold War. In pursuit of its great bid in the Middle East, Russia is recovering its ability to influence the international era where multi-polarity and multipolar political agents are widespread and rather ordinary. The current international era is neither bipolar like in the Cold War Period, nor unipolar like in the Post-Cold War Period. Various patterns of alliances, new emerging tensions between states over security questions and vibrant and transnational actors, such as DAESH and al-Nusra, and strong political figures, such as Recep Tayyip Erdoğan, stimulate a new international society, which is not able to be characterized by a pure EU centrism.The question remains: is it possible to be recognized as a great power and ensure its relative acceptance by the other great and new emerging powers like Turkey, by rejecting a meeting with Turkish counterpart Recep Tayyip Erdoğan in Paris just because Turkey shot down the Russian jet to protect its borders fully in line with Turkey's rule of engagement?

In addition, Turkey made every effort to avoid such an incident and warned Russia seriously several times. Russia puts its own vigorous claim to be recognized as one of the most prominent actors in the Middle East and guarantee its membership in international society, over a dominant political figure, Vladimir Putin, since his election as president in 2000. Correspondingly, the occupation of Syria will last a long time compared to that of Afghanistan where the Soviet Union destroyed the irrigation systems by aerial bombing and attacked villages where resistance groups were known to reside. Most ominously, Russia has intensified its bombing campaign since Turkey blasted its jet and Putin ordered the campaign, which stretches from homes to schools, bakeries and even hospitals in the southern Idlib province, leaving at least 44 innocent people dead. Vladimir Putin expresses himself as a strong leader who took Russia out of the economic, social and political crisis of the 1990s and defends Russia's national interests; however, his reasonability to protect Russia from any political crisis is highly questionable while he shuts the door firmly to avoid any diplomatic-based solution and launches intensified attacks on 45,000 internally-displaced people. Given the permanent features of Russia's Syrian occupation, there won't be any quick shift in Putin's strategy. Based on ambiguous estimates of Russia's time in Syria, diplomatic solutions should be discussed exhaustively to restore common sense concerning the role Syria plays between Turkey and Russia.