How not to fight against terrorism 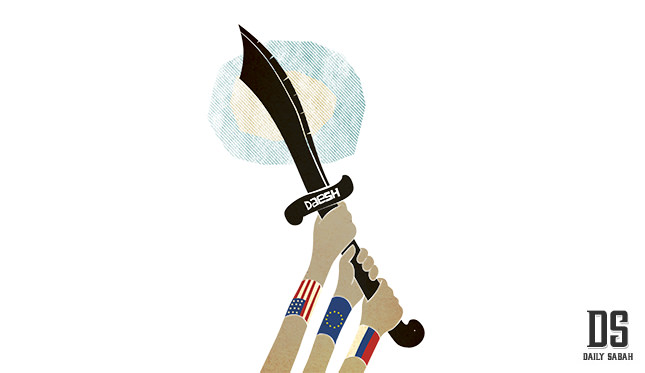 An ordinary Muslim residing in Cairo, Istanbul or Delhi does not understand or approve of the discourse on counterterrorism imported from these countries. They see this discourse as another powerful tool to advance the national and strategic interests of these states, which is sometimes another extension of colonial control

What U.S. Republican presidential candidate Donald Trump said last week about banning Muslims from entering the United States is not an exceptional example of hate speech, it is rather a natural outcome of the current state of global politics. Since the recent terrorist attacks in Paris, there is talk that French secularism is under threat, European values are under threat, and Russia asserted that Turkey should not be allowed to join the European Union. From Muslims' perspectives, one can imagine how deeply continuing colonial control, wars and Western- and Russian-supported dictatorships have damaged the trust of Islamic Arab societies. If French secularism, or rather, the entire European Enlightenment is susceptible to a terrorist attack, why can Islamic values not face a distortive, reactionary process after centuries of Western colonial and post-colonial conditions?

The rise of xenophobia and anti-immigrant rhetoric in Europe is gradually becoming a universal phenomenon, something that the developed world, including Russia and China, avoid talking about. Demands to ban entry to immigrants or restrict their voting rights are coming from matured democracies, which show that secular democracy is still passing through a tough time. To find a convenient external hand for their failing domestic state of affairs has become a common template of these democracies. As Graham Fuller once argued, even without Islam, world politics would have been facing similar scenarios. Islam or no Islam, there are enough reasons within the functioning of the international system that require its urgent reform or a complete change. Those who are the least affected by the global system of injustice are looking for reasons outside and, most conveniently, in Islam and Islamic societies. This may be because it constitutes the largest religious-political community that remained after Western colonial rule.

A FLAWED DISCOURSE ON COUNTERTERRORISM

Muslims look at the current state of politics, both at the domestic and international levels, very differently indeed and very critically. Post-war Europe received serious reconstructive support, while the post-colonial Muslim world received more authoritarianism, political exclusion, territorial disputes and sectarian divides. Political Islam stood to withstand these challenges, and the Iranian revolution set the most inspiring template for them. In the wake of DAESH, political Islam is failing or retreating in Egypt, Tunisia, Libya, Yemen, Iraq and Syria. It may be too early to say that DAESH is replacing political Islam, but it has certainly posed the most serious intellectual challenge to political Islam whose proponents have to respond to many ugly questions, which have been ignored by them so far. The current Muslim perspective, however much it is internally contested though, points out that modern, secular democracy is not democratic enough. For them the entire world has become an enemy to Islam and Muslims; their countries are being occupied, their regimes are remote-controlled, their resources are stolen and their right to a Muslim identity is under threat. The rise of far-right politics in democratic countries is only proving this point.The Western perspective, now expanded to non-Western countries as well, has become very critical of the rise of extremist and terrorist networks in Islamic societies. Their states and policymakers are hysterically discussing how an extremist version of Islam that advocates the use of violence against Western countries, their institutions and citizens can be defeated.

An ordinary Muslim residing in Cairo, Istanbul or Delhi does not understand or approve of the discourse on counterterrorism imported from these countries. They see this discourse as another powerful tool to advance the national and strategic interests of these states, which is sometime another extension of colonial control. For example, Russia's counterterrorism narrative is clearly seen as a tool to protect and strengthen its allies, mainly Syrian President Bashar Assad and the Iranian regime. In this context, speaking against terrorism has become more about blaming Sunni Islam and Sunni Islamic texts, and most susceptibly Salafism, Wahhabism and political Islam. By focusing debate on Islam and its religious texts and then linking Muslims' actions to these texts, as in the case of DAESH, we are caught in an unstoppable cycle of traps. The more they blame texts, religious groups and institutions, the more they discount the tyranny of regimes and their allies.

Whether Islam or continuity of colonial practices and institutions are responsible for this violence have their right answers in the complex functioning of modern nation-states. Undisputedly, of 57 majority Muslim countries, most have been under extreme colonial conditioning and no Marshal Plan type of corrective measures were taken by the erstwhile colonial masters. The installation of undemocratic regimes, military leaders, revolutionaries and religiously supported autocrats were the only gifts from the outgoing colonial powers. These have all survived until today because they always had a supporter from the West or Russia. Islamic societies are caught between the tyrannies of authoritarian nation-state regimes and reactionary religious movements. Muslims have always been betrayed by state institutions whenever they tried to undertake an honest movement for reform, either by suppressing it or by hijacking it for their own interests.

It is a useless debate whether U.S. intervention is bad and Russian intervention is good; what is more dangerous is how their interventions have reduced a diverse but largely tolerant religious discourse to a war among a few warring sects. The way a genuine uprising for justice, dignity and freedom turned into an ugly sectarian civil war has been directly and purposefully made to serve the greater interests of these powers. If democratic aspirations of European, American, Asian and African states can be a genuine human aspiration, why can it not be genuine if it is in Syria, Libya, Egypt or Yemen? The Western and Russian responses to these uprisings were shaped not by their respect for these struggles, but rather to recreate a favorable relation of dependency with the new regimes.

IT IS NOT ASSAD VS. DAESH

It would be wrong to assume that DAESH does not enjoy popularity and legitimacy in areas under its control. Also, their powerful use of Islam to justify their rule is not without effect. DAESH is not just a group of some miscreants; it is an idea against the ongoing politics in Iraq and Syria. A fight against DAESH will have to win both territory as well as the trust of the people influenced by its propaganda. To define a discourse on counterterrorism in terms of choosing between Assad, Iraq's exclusionary state and DAESH may protect Russian, Iranian and American interests, but it cannot defeat extremism. Who can better fight terrorism and extremist interpretations of Islamic texts? At least weapons and airstrikes alone cannot defeat it. Only a democratically empowered Arab and Muslim citizenry can challenge DAESH's legitimacy and validity in a way in which religious and sectarian determinism ceases to exist as a principle of politics currently practiced by Iran, Saudi Arabia and their allies in the region.