The Syrian peace process: An analysis from UN Resolution 2249 to 2254 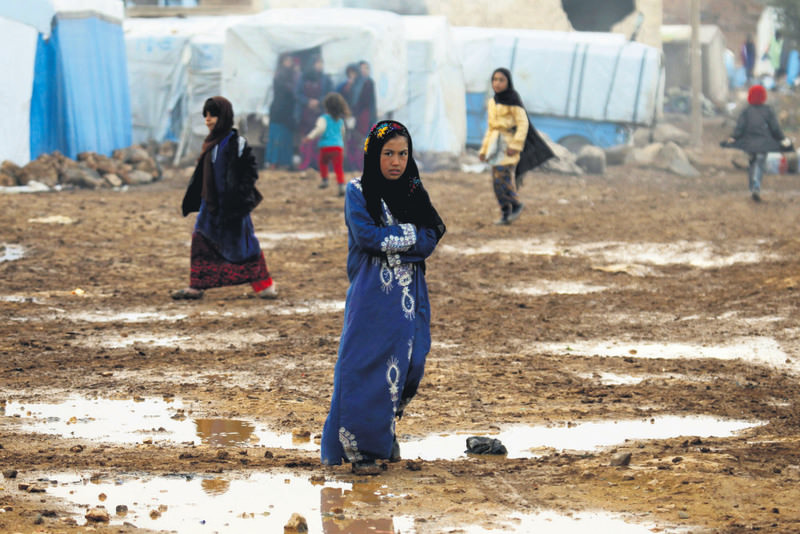 Displaced Syrian girl walking puddles of water amid a refugee camp in the Hama countryside, Syria.(Reuters Photo)
by Shah Rukh Hashmi Jan 05, 2016 12:00 am

Peace talks for Syria's future, which have, since the conflict started, been a main topic in multiple actors' foreign policy, gathered under the roof of the two major resolutions 2249 and 2254

One of the major hindrances to install mechanisms for peace in Syria is the absence of cohesion and divergence of interests among the actors involved. Trans-national terrorist, rebel groups, regional actors and global players are all involved in the country's civil war and the gravity and complexity of situation has undermined several attempts for peace so far. The United Nations, however, expedited its mechanism and the U.N. Security Council (UNSC) passed two major resolutions, 2249 and 2254, on Syria, setting a precedent for the peaceful resolution of the conflict.

The UNSC's accelerated and highly motivated moves are fueled by the series of events pertaining to Syria both directly or indirectly. The catalyst for the UNSC's advanced approach are Russia's decision to rescue the regime of President Bashar Assad in Syria in October, the carnage of the attacks in Paris in mid-November and, last but not least, Turkey's downing of the Russian Su-24 fighter plane in the last week of November. Perhaps most important is the growing public opinion in Syria and the Middle East about Russia as a guarantor for peace and stabilizing force in the region.

Neither Russia nor the United Sates are moved by the human catastrophe in Syria. Emotions, ethics and morality are of the least or no concern to statehood. Interestingly, masses believe these moral principles are applicable in international politics. Presumably, it is neither wrong nor unjustified to visualize an international system and network of actors that practice foreign policy in compliance with settled and agreed upon rules, norms and values based on ethics and morals. People are, however, simply unaware of the fact that states do not have emotion. Indeed, space for emotions in statehood does not exist.

Notable realist Hans J. Morgenthau argues that politics, as an autonomous driving force for statecraft, utilizes ethics or moral principles to achieve its political objectives, which are not objectives of ethics and morals . Similar are the views of his predecessor in the field such as Machiavelli found in "The Prince, Hobbes in "Leviathan," Chanakya and ancient Roman and Greek thinkers. If it is so, then why we are witnessing a sudden wakeup call from the UNSC and back-to-back resolutions while it paid lip service to the killing of 250,000 and millions of displaced Syrians both internally and externally.

It has been 40 years since the Soviet Union fought in Afghanistan, a war out of soviet border expansion. Intervention in Syria is the first military engagement from Moscow in the post-Soviet era. It is pertinent to analyze Russia motives, intentions and objectives in Syria. The Kremlin offers a prime explanation of its objective in Syria saying that its entrance into the conflict is to restrict and root out DAESH and prevent its domino effect in Central Asia, which is believed to be a special zone of post-Soviet Russian interests. Moreover, DAESH's success would empower extremist ideologies and their alleged links to Chechen separatists. So, to nip this evil in the bud is in Russia's national interest.

Contrary to this, Western scholars criticize these explanations and given objectives of Russian intervention in Syria and tend to believe that Russia wants to change the focus of global panorama from Ukraine, and the situation in Syria rescued Russia to this end. If the assumption is true, it is interesting to say that Moscow has succeeded in this campaign. Ukraine is mentioned less now and Syria has replaced global panorama.

Having bitter experiences in Afghanistan and Iraq the United States refrained from intervening effectively in Libya and Syria. This negated the myth of the global hegemon's reputation of resolve and commitment to the world's peace and security. Annoyed by Russia's unilateral intervention in favor of the Assad regime in Syria, the Paris attack allowed the West and the United States to reassess their policies on the Syrian conflict. France hastily made a decision and started attacking DAESH, perhaps to pacify its people's resentment in the capital and elsewhere.

Followed by the UNSC Resolution 2249, the United Kingdom, too, jumped in the conflict zone and started bombing DAESH. The resolution declared DAESH a source of an "unprecedented" threat to international peace and security and called the member states to take "all necessary measures" to prevent and destroy it and its capacity to wreak violence and acts of terrorism. Thus, the United States and its allies are on one side and Russia and the Assad regime are on the other, all fighting in Syria, presumably for different goals.

One might not disagree that Russia escaped the international row over its involvement in Ukraine and annexation of Crimea by involving itself in Syria. At the same time, one must accept the West and UNSC's back-to-back resolutions as credit-seeking diplomatic moves that aim to increase the popularity of Russia in Syria, as shown on the television station Russia Today (RT), and to negate the resonance of failures of Western solutions to the conflict. It can be argued that the UNSC resolutions are not possible without Russia's vote, yet it does not nullify the logic of consequence to take such resolutions in such an efficient manner.

Does Resolution 2249 significantly impact DAESH and other rebel groups? The answer to this is not hopeful. In asymmetrical conflicts carpet bombing is not very successful, as seen by the failure of this method against the Vietcong in the Vietnam War, nor did it help substantially in defeating the Taliban in Afghanistan. DAESH, however, claims to be a state by exercising certain attributes of a state. However, unlike any nation-state, its formal structure is rather informal and different enough to be rendered dysfunctional by aerial bombing. Consequently, it is not safe to assume that terrorist attacks like those in Paris, the Sinai and Beirut are less likely in future.Coming to the most recent development, the UNSC unanimously adopted Resolution 2254, which endorses a road map for a peace process in Syria and sets a timetable for talks in early January. Peace talks between the Syrian government and members of opposition groups would be facilitated by the United Nations and would cover the outlines for a nationwide cease-fire to begin as soon as the parties concerned take the initial steps toward a political transition. Endorsement of the Geneva Communique and the Vienna statements in pursuit of the communique's implementation as the basis for a Syrian-led, Syrian-owned political transition to end the conflict appears optimistic.

The question then is not about text for peace or the United Nations calling for such measures, but rather how it would be implemented. Russia criticized the resolution as an externally imposed solution to the Syrian problem. To appease Russia and the Assad regime's apprehensions, the resolution does not deprive them of participating in U.N.-facilitated peace talks or in future elections. Similarly, it is naive to consider a nationwide cease-fire, assuming DAESH and other rebels are party to the peace talks and opt for a cease-fire within six months.It seems the conflict has gone drastically out of control. The many actors and their pursuits for divergent objectives is the central obstacle to de-escalating the conflict. The unanimous resolutions exist, but the reality on the ground is different. Even if Resolution 2254 is successfully implemented it needs a minimum of six months for peace talks and a further one-and-a-half years for elections. Although human advancement in technology has experienced rapid change, the modus operandi to solve conflicts is more or less a decade-longprocess, as in Afghanistan, Iraq and now Syria.