Can the EU avoid collapse? 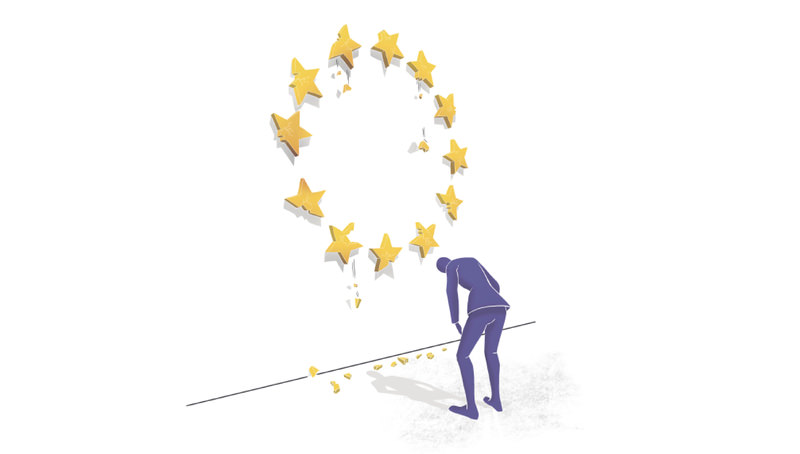 Unable to break from its historical illness that began with the Enlightenment which cleaved the spirit from the body, the EU needs the inclusiveness of Turkey's partnership, embracing all cultures, to step back from the brink of collapse

We have seen for a long time that the Western world in general and Northern and Western Europe in particular are mired in a cultural crisis. As culture is a blanket term encompassing all aspects of life, this situation points to a crisis in every dimension of social, individual and political life in the West.

Indeed, Nietzsche had seen this dark picture well before the shocks caused by World War I and tried to offer his own solutions. But his realization that modern Western culture had drifted into a deadly crisis did not change the tragedy of the same problem repeating itself in his person.

That crisis led to a huge black hole, tearing apart the fabric of life, society and man in Western civilization, separating the mind from the spirit and material reality from metaphysics, totally destroying or reducing the latter. The West had seemed absolutely victorious in its war against the Church inside and against the Ottomans outside. These two entities, i.e., the Church and the Ottomans, had been the founding other of Western Enlightenment. It could have been understandable if it had not destroyed the keystone of human existence, man and society's search for meaning and the sense of life's integrity.

According to the secularization argument from Enlightenment intellectuals, and especially social scientists, the quest for religion and faith had resulted from primitive man's need to explain earthquakes, lightning and cycles of the day, night and seasons. Social scientists in the 19th and 20th century, on the other hand, reduced religion to a source of consolation for the helpless poor. Hence the secularization argument held that as long as science and technology satisfy human needs, interest in religion would wane and these needs would be satisfied by the trio of nation-state, bureaucracy and science in a rational and concrete manner, not by the consolation of fictive faith, and consequently, religion would become marginalized and quit the world stage.

As the Enlightenment began in the 16th century and was followed by geographic discoveries and the Industrial Revolution, the Church assumed that science would fail to fill the gaps of life. However, science achieved to fill many gaps and brought the Church to its knees, turning it into an accessory to secular culture.

The West is making the same mistake now.

The dominant Western culture seems to have either underestimated the crucial importance of the disintegration of man's wholeness or failed to respond to man's quest for wholeness and meaning. The secularization argument had collapsed. This is accepted by many social scientists and liberal theologians now who had passionately defended the argument in the 1960s. The Church has lost its institutional influence in Northern and Western Europe, but this is not the case in other regions. In addition, it appears that faith at the individual level has not gone anywhere and is even on the rise. The percentage of those regularly attending church is 2 percent in Iceland, but 82 percent of people believe in God there and the percentage of atheists stands at 2 percent. Iceland is the most secular nation on earth.

Is this a secondary issue related only to one of the many realities surrounding humankind? Of course not. It would have, and is actually having, significant effects on every aspect of life, society and politics. Yes, Nietzsche had anticipated the crisis of Western culture. The web of meanings and symbols that could hold Western society together had been destroyed. The individual became atomized, society was broken into pieces, values became vague, the sacred was obliterated and the bureaucracy, which had tried to replace social conscience, morality and taboos, ended up in the scientific gas chambers of Auschwitz. As a result, for intellectuals like Stefan Zweig and Georg Trakl, who had devoted their lives to the magnificence of Western humanism, the time came to quit the stage. Nietzsche had been last seen entangled in his thesis on the "revaluation of all values." Since he rejected metaphysics, it was the only thing left he could do. Once he restricted reality solely to the rational, it became impossible to find a solution in this confine. In an immense paradox, the philosopher-genius would shut down his mind, or his rationality, and went insane. Others took their lives in the years between the two world wars, like Zweig, who said: "There is no place in the world where I would set my foot."

Former French President Nicolas Sarkozy, that grotesque figure, is reportedly to have said that the "Schengen zone is dead" and that the EU will not be able to overcome the refugee crisis and will eventually collapse.

Indeed, Sarkozy is hardly a likable figure. But is he wrong to herald this outcome, for which he is also responsible? Why did it happen like that? Why does the EU, in other words the most illustrious outcome from the Enlightenment, face the danger of collapse? Why does Turkey not falter the least despite taking in 2.6 million refugees, while the mighty, proud and affluent EU watches silently as these hapless people drown in the Aegean and Mediterranean and as Egypt's elected president was toppled amid violence? Perhaps the EU is faced with collapse because it fails to prepare for migrants and betrays its democratic values in the Middle East. Or maybe the crisis of Western culture, which I described in this lengthy prelude, causes it.

It must be noted that the hatred and fear of President Recep Tayyip Erdoğan and Egypt's deposed President Mohammed Morsi in large parts of the West result from this paradox of the Enlightenment. Of course, reactions against Muslim migrants also stem from the same reason. By making its own existence contingent on the ontological evil of the other, i.e. the Middle East, and waging war on it, the West has actually waged a war on itself. According to the secularization argument, the emergence and successful coming to power through democratic methods of the Justice and Development (AK Party) in Turkey, the Muslim Brotherhood in Egypt and Hamas in Palestine - though these three examples contain significant differences, they are negligible within the context in which I frame the issue - should have been impossible, for they are pious and their values clash with those of the Enlightenment. The secularization argument asserts that once one believes they have found the ultimate lifestyle that the world and humanity can offer, there is no other course but to persuade the rest of the world to also adopt it, or if that is not possible, to forcefully impose that lifestyle on them for their own good. However, Turkey has showed since 2002, through its equally democratic and authentic model, that this is not the only course available. A part of the West has deliberately shunned understanding and appreciating this while the ideological hubris of some has prevented them from realizing it, and some others have found it incompatible with their political interests. They have rejected the idea that Turkey can meet and even surpass or improve on the Western criteria for democracy through its own authentic methods, at peace with religion and believers because one, nothing good can come from religious people and two, Turkey should not be an independent country, but remain as a penetrated satellite of the Western club instead.

For this reason, a series of successive secular coup attempts in Turkey, which have become frequent after the Gezi protests of 2013 and which have targeted the legitimate elected government, were met with sympathy and even active support. If the West had not contradicted itself by deviating from the course it had laid, it would have regarded these elected governments in Turkey and Egypt, which rejected violence categorically, as the confirmation and achievement of civilization. However, the West's failure to realize that overlapped its cultural crisis.

But this does not mean Erdoğan and his government in Turkey and Morsi and the Muslim Brotherhood in Egypt have not made any mistakes. I am not an expert on Egypt, but I know Turkey very well. Even Gandhi would have felt powerless in Turkey 13 years ago, at a time when the country faced every kind of coup attempt and saw its agenda constantly occupied by suspicious events. However, Erdoğan and conservatives did not complain about it and stayed away from violence. When problems became complicated, they allowed elections, i.e., the people, to solve the crisis. They had to wait for four years.

The main opposition Republican People's Party (CHP), secular Nationalist Movement Party (MHP), and the far-left, secularist pro-Kurdish People's Democratic Party (HDP) together with the PKK, Revolutionary People's Liberation Party-Front (DHKP-C), Marxist-Leninist Communist Party (MLKP), DAESH, Gülenist Terror Organization (FETÖ) and the influential media of the elites, had got involved in an infamous coup process. That the West sympathized with this effort is an ontological problem for the West itself, not Turkey. Anyway, Turkey has noted it. This is not a threat, but an expression of reality.

MUTUAL ADVANTAGE FOR THE EU

Indeed, Turkey will somehow follow its own path. For despite a difficult region and scores of difficult problems, it has many advantages that the West lacks. Since the people of this country have not been fully assimilated by Western modernity and lived as victims of the First Republic, their lives - as well as mine - did not lose their meaning and integrity. Much as we know we have a body, we also believe that we have a spirit and can activate our spiritual powers. We can take in millions of more refugees because we love them for the sake of God, as the values prescribed by our heartfelt beliefs forbid us to sleep with full stomachs while our neighbor is hungry. Helping the downtrodden makes us happy, further increasing our strength.

If you think that this is not reflected in politics, society and the economy, you had better think again. The answers and values needed by humanity will most probably come from religions during this century.

They have not disappeared for good, but were only banished into exile for a while.

In this sense, the West can solve its crisis by taking countries like Turkey as an example and reconciling science and religion and body and spirit. Turkey is a living example of this. Turkey offers the questions that the West forgot to ask, together with their answers.

The EU should not be allowed to collapse, because it is so precious, and Turkey needs to participate in it. This can become possible only when Western culture opens itself up to serious criticism. I believe that Europe has this potential. We should restore wholeness to people's lives and bring an end to its fragmentation for a better century.
Last Update: Jan 12, 2016 1:45 am
RELATED TOPICS