Persuading the electorate: The main problem of the opposition in Turkey 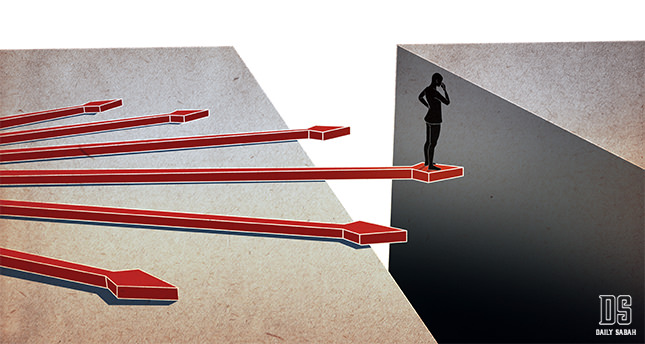 To repair the party's bad image in Turkish politics, main opposition CHP held a congress last weekend, in which Kemal Kılıçdaroğlu was re-elected with no difficulty

The main opposition Republican People's Party (CHP) held its 35th ordinary congress this Saturday in Ankara. It was an unusually calm and uncompetitive congress with no challenge to Kemal Kılıçdaroğlu, who has been the party chairman since 2010, and he is re-elected for a new term at the helm of the CHP together with almost his entire cadre.

The motto of this CHP congress was "Democracy, change and fraternity." Despite its promise for change, this is hardly the first call for change in the CHP. The last 10 years saw several calls and promises from the party leadership to transform, change and open up to embrace the masses. The party has a long-term ambition to open up to right-wing voters, create assertive political proposals and change its political discourse to expand its electoral base and become an alternative political solution.

When Deniz Baykal, Kılıçdaroğlu's predecessor, was chairman, this pledge for change largely referred to cosmetic changes such as deploying symbolic right-wing politicians in the party or preparing press conferences to show that women wearing headscarves are also welcome in the party as members. Beyond these cosmetic changes the party has remained as the party of the official Kemalist ideology, the political representative of the elites and military oligarchy.

Kılıçdaroğlu, however, extended the scale of this call for change as soon as he came into office and has taken the party through more organizational and ideological restructuring steps in the last five years. He reduced the Kemalist emphasis on party policies, extended the economic and social proposals of the party and abandoned its classical position as the unquestioning supporter of the military hegemony over politics. He tried to change the image of CHP as the party of elites and rich urban voters, but struggled to expand its votes among the poorer sections of the population. From the beginning, economic policy and social policy proposals remained key for Kılıçdaroğlu to expand the party's electoral base. As a political project, Kılıçdaroğlu aimed to transform the CHP into a classic social-democratic party, just as we are used to seeing in Europe.

On the other hand, although this strong ambition to transform the CHP into a modern social-democratic party and escape its strictly Kemalist and elitist legacy, this approach hardly brought the party sufficient votes to form an alternative government. The CHP entered six elections under Kılıçdaroğlu's leadership - three general elections, one local election, one referendum and one presidential election - and the party was able to hold a narrow band of 25 percent to 26 percent of the vote, despite significant changes in the composition of other parties. Although the CHP increased its number of votes from 11 million in the 2011 general elections to 12 million in 2015, this slight increase was not enough to accommodate the growth of the electorate. Entering six elections with slogans of toppling the existing government, but barely maintaining its percentage of votes when the ballots are counted cannot be deemed as a success by almost all political criteria.

WHAT'S THE PROBLEM WITH THE TURKISH OPPOSITION?

In other words, the CHP has a clear problem of expanding its electoral base, despite all the changes to the party's political promises, ideology, cadres and discourse. This case needs to be scrutinized, of course primarily by the CHP leadership, if they ever want to win an election. If they keep repeating their mistakes, and if they do not care to even analyze and re-evaluate themselves, they will always reach the same point.

Many political analysts formulate the problem of the CHP as a problem of persuasiveness. Although the CHP has injected quite a bit of fresh blood to its cadres under Kılıçdaroğlu's leadership and has changed its ideology and discourse toward ambitious social-democratic policies, these changes have not been successful in attracting any real support.

To scrutinize this phenomenon, the CHP's social policy promises in the latest two elections make a great case. Both in the June 7 and Nov. 1 snap elections, the CHP made comprehensive social policy promises from the offer of providing family insurance nationwide to an expansion of labor rights and from new jobs for the youth to generous grants for students. The party gave further assertive promises. They promised to give personnel status to all subcontracted employees and a significant increase in the national minimum wage. In fact, the idea of raising the minimum wage was first proposed by CHP in the June 7 elections. In other words, it was an original invention of the CHP's as a political will.

The Justice and Development Party (AK Party) adopted most of the CHP's social policy promises, including the one to increase the minimum wage, in its Nov. 1 election campaign. The same promises that gained almost no support for the CHP gave AK Party an increase of almost 9 percent to its share of the vote. The very similar social policy promises that did not work for the CHP attracted strong support from voters when adopted by the AK Party. This quite interesting political phenomenon in Turkey's modern politics needs to be understood.

THE PROBLEM OF PERSUADING THE ELECTORATE

In fact, persuasiveness is the most necessary mechanism that would translate political will and promises into political gains - this is a crystal clear political fact. To be a convincing politician is of the utmost importance in politics, especially if you are competing with a political party that mastered persuading the electorate that it is serious and capable of realizing change like the AK Party.

Only if as the CHP and the other opposition parties start to re-evaluate their situation in a seriously manner by thinking about the question of why the electorate does not believe in them instead of having the attitude that the masses do not understand them and that is their problem, a real political change remains only a distant possibility.