David Bowie and the celebration of difference 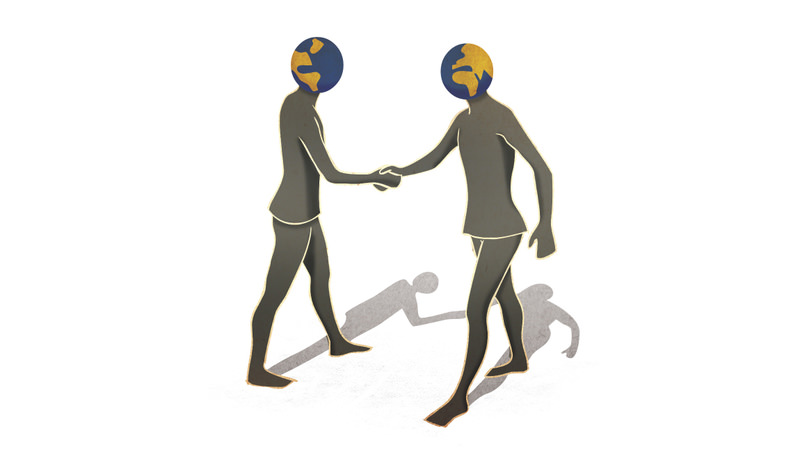 Living in the midst of chaos prevalent around the world makes us forget that we are all human regardless of our identity, race, nation, culture or religion

Bowie, the shy boy who grew up in the suburb of proletarian and multicultural Brixton, London, who breathed life into train stations, platforms, waiting rooms and smoke chimneys (Buddha of Suburbia, 1993) is no longer with us. Only a few people knew that he was terminally ill and was preparing his last exit from this world with a new - in fact, a farewell - album whose last song was titled "I Can't Give Everything Away" (Blackstar, 2016). His music, especially in film soundtracks, was so different and supple that in movies ranging from space adventures to the world wars, it never sounded out of place; moreover, it had such a power that it could make an alien feel ordinary and the ordinary alien.

I learned of the death of Bowie on the morning I arrived in Bangkok for a symposium on intercultural diversity and peaceful co-existence organized by the Devawongse Institute of Foreign Affairs, Thailand. As soon as I arrived in my hotel, I began to listen to his great song "Ashes to Ashes" (Scary Monsters . . and Super Creeps, 1980) on my cellphone. I could not help myself contemplating on the current situation of humanity. Every single one of us knows that we are all mortals and one day we are going to return to ashes ("dust thou art, and unto dust thou shalt return" Genesis III/19). Yet, we are still living in an age of intolerance towards each other as if we are going to stay in this world forever. When one listens to Bowie, they become aware of the fact that difference has a positive power; he was trying to blur boundaries rather than sharpen them. Difference is a quality that makes us and our lives richer. As an anthropologist myself I have always thought that Bowie must have studied some ethnographic texts because he was doing what anthropologists were trying to find and display in cultural fields.

Awareness and appreciation of difference will eventually bring about peace in all of us. The meaning of peace has multiple parts contrary to common understanding reduced to absence of war or freedom of war at a time when a war or conflict ends. Peace also refers to law and order or the absence of violence or other disturbances within a state. Apart from these two relatively external situations, peace reflects mental calm and the serenity of an individual and the state of harmony and freedom of conflict or disagreement among people or groups of people. It is often overlooked that these two last states of peace, i.e. the inner calmness of a person and harmony with other people, will eventually lead to peace in the world at large. In order to gain this state, the education of young people at a young age becomes imperative.

Religious and cultural diversity has often harmed the stability of the international community and caused conflicts among people with different ethnic and religious backgrounds at the national and international level. In order to deal with this issue a symposium was arranged in Thailand, which itself is a multicultural society. The "Symposium on Interfaith Dialogue and Peaceful Coexistence in Multicultural Societies" was co-organized by the Ministry of Foreign Affairs and the Research Center for Islamic History, Art and Culture (IRCICA) of the OIC was held on Jan. 11 in Bangkok. It was attended by high level officials like Iyad Ameen Madani, secretary-general of the Organization of Islamic Cooperation, Dr. Halit Eren, director general of the IRCICA, and officials from the Ministry of Foreign Affairs of Thailand, and religious authorities in the country.

This one-day symposium was a venue to discuss and share different ideas and real life experiences on social cohesion and stability in the modern multicultural yet intolerant world. The main result after the deliberation of speeches was that we must gain a better understanding of each other by instilling tolerant values into our children as objectively as possible. Teaching needs to be free from "indoctrination" and must be given in a way to enhance knowledge and eagerness to understand and learn as well as learning to respect and accept cultural differences. Although people are aware of the existence of distinct cultural groups, be it Christian, Buddhist, Hindu or Muslim in their neighborhoods, only a few of them know something about Christianity, Buddhism, Hinduism and Islam. More significantly the will to learn and understand another culture is quite low. The scant knowledge of other cultures and the low will to understand them consequently leads to low respect. In other words, in an increasingly pluralistic world, separate groups with different cultures live side by side with minimal social interaction among the members of these groups. Thus, the society looks more like a mosaic of culture that is as solid as marble with very limited fluidity. Today in most parts of the world individuals inherit the stories of previous wars fought, previous aggressions committed, and actions that led to the loss of trust that are difficult to forget. These past realities create fear and insecurity that, in turn, lead to challenging the existence of other people, and heightening conflict. Denying such past experiences does not wipe them out from history; on the contrary they threaten present day relationships. Acknowledging them might create an opportunity and most importantly, the possibility of a positive transformation that creates new relationships.

As David Bowie showed us, it is great to be different, that is, belonging to this or that religion or coming from a distinct ethnic background should not prevent us from entering into a friendly relationship with each other. The world must be a safe place for difference.

* Professor of anthropology in the Department of Radio, Television and Cinema at Marmara University
Last Update: Feb 08, 2016 1:43 pm
RELATED TOPICS