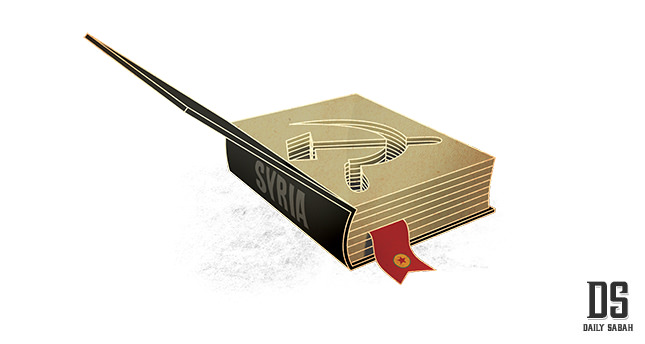 by Şener Aktürk Jan 27, 2016 12:00 am
While the Syrian Democratic Union Party (PYD) is hailed by some in the West almost as a pro-Western democratic militia fighting for a liberal pluralist oasis in the desert, nothing can be further from the truth. The PYD has already established a one-party regime that can be best described as a "belated Soviet experiment" in Syria. The PYD regime is the antithesis of the political pluralism and partisan competition that is the sine qua non of any liberal democracy. Arabs, Armenians, Assyrians, Turkmens and even thousands of dissident Kurds have denounced the PYD's one-party dictatorship, and "voted with their feet" in seeking refuge in neighboring Turkey as well as the Kurdistan Regional Government (KRG) in Northern Iraq, both of which are defective but functioning multiparty regimes. In contrast, the PYD's "Rojava Revolution" is the building of a one party state.

The PKK in Turkey, and its Syrian affiliate PYD, are Marxist-Leninist organizations with an overwhelmingly Kurdish militant base. Their aim, already mostly realized in Syria, appears to be the establishment of a militarized one-party regime that combines ethnic nationalist demands with socialism. This fact must be confronted in order to dispel any liberal illusions or wishful thinking regarding the role of the PKK and PYD in the political struggles taking place in the Middle East.

Firstly and most importantly, as in the Soviet experience, the PYD established a one-party dictatorship in the territories where it had gained control in northern Syria, perhaps ironically with the support of the United States Air Force, followed by even more substantial Russian military support, their geopolitical ally for many decades. The PKK also seeks to establish a militarized one-party state in Turkey's southeastern provinces, as will be discussed below. Insistence on a vanguard party and a one-party state, implementing socialism in politics, economy, and society, are distinctive features of the PKK-PYD.

Secondly, both the PKK and PYD self-identify as Marxist-Leninist, with Abdullah Öcalan as their undisputed leader. Since the 1970s, Öcalan has articulated a nationalist socialist ideology inspired by the Soviet example, building on Lenin's and Stalin's works on the question of national identity. Ideologically, they see themselves as continuing the work of the Bolshevik October Revolution (1917).

Thirdly, both the PKK and PYD combine socialism and ethnic Kurdish nationalism in a way that is reminiscent of the Soviet method, which leading scholars of the Soviet nationalities policy summarized as "national in form, socialist in content." In a nutshell, this amounts to propagating Marxist-Leninist arguments, concepts, and slogans, such as "brotherhood of nations," but translated into Kurdish. Unsurprisingly, this does not amount to any kind of authentic ethnic Kurdish cultural awakening, just as it did not result in any kind of genuine Tajik cultural awakening in Soviet Central Asia.

Fourthly, the PYD has scared away tens of thousands of Arabs and Turkmen from the territories which it occupied, in what amounts to a policy of ethnic cleansing. Arabic and Turkish-speaking inhabitants of southeastern Turkey have also fled their homes due to the PKK's intimidation over many years. On a much greater scale, Bolsheviks too deported hundreds of thousands of Soviet citizens including Chechens, Crimean Tatars, Germans, Greeks, Koreans, Meshketian Turks and Ukrainians during the 20th century, while chanting slogans of the "brotherhood of nations" and others exploiting humanistic sentiments.

Fifthly, the PYD and PKK have intimidated those Christian minorities under their rule, as evidenced by a joint statement of 16 Armenian and Assyrian organizations in the Hasakah province, condemning the PYD's confiscation of their property, forceful conscription of Christians, and even interference in their church curricula (Agos, Nov. 5, 2015). The PYD's reply was reminiscent of the Soviet response in similar situations: one Armenian and one Assyrian person spoke to Fırat News Agency, which is close the PKK-PYD, and stated that, "nobody confiscated our property… [and] we get education in our own language." This statement was then circulated in networks sympathetic to or supportive of the PKK-PYD. This pattern resembles Soviet Communist Party's local apparatchiks, whether Kazakh, Ukrainian, or Uzbek Communists, "refuting" the "counter-revolutionary allegations" that Kazakhs, Uzbeks, or Ukrainians are being persecuted in the Soviet Union. Kazakhs, Uzbeks or Ukrainians also "received education in their own language" in the Soviet Union, while forceful conscription, confiscation of property, and severe restrictions of political and religious freedoms were continuing.

​INCREASING NATIONALISM AND SOCIALISM IN KURDS ​

Sixthly, and perhaps most significantly, the PKK and PYD both persecute ethnic Kurds who do not conform to their socialist ideal type, because their ideology aims at a radical "social engineering" project that seeks to completely transform (or deform, depending on one's perspective) Kurdish culture and identity, much as in the Soviet Union. Perhaps the most telling example and witness in this regard is Professor Mustafa Müslim, the elder brother of PYD leader Salih Muslim, who fled his brother's regime and sought refuge in Turkey. Mustafa Muslim argued in a widely circulated interview, that "the PYD only represents 10 percent of Syria's Kurds" and that "the reason for the PYD's strength is their possession of weapons. They arrest dissidents and do not want any difference of opinion." Thousands of dissident Kurds such as Mustafa Muslim have fled the PYD regime and are currently residing in Turkey and in the KRG, hinting that the PYD regime is a militarized one-party regime supported by only a minority among the Kurds.

Nominally, the PYD shares power with another Kurdish body, the Kurdish National Council, reputed to be closer to Iraqi Kurdish Kurdistan Democratic Party (KDP), but in numerous conflicts it has become apparent that the PYD has established a monopoly on military force and actual political decision-making. This is also not unlike the early stages of the October Revolution, where Bolsheviks acquired the monopoly over the means of violence and actual political power, but nominally tolerated the more popular Socialist Revolutionaries for a while, during which they concentrated on attacking the conservative, Christian, liberal, and other non-socialist opposition. PYD leader Salih Muslim recently emphasized that the peshmerga, Kurdish warriors affiliated with the KDP, would be denied entry to the Rojava region.

​THE PKK'S NO WAY FOR ANY POLITICAL PARTIES' SLOGAN ​

The PKK does not tolerate any other political organization in the territories under its influence in Turkey. Most political parties now do not even bother campaigning in the mostly Kurdish-populated provinces in southeastern Turkey. Among the mainstream political parties, the only exception to this matter is the governing Justice and Development Party (AK Party), which still has significant Kurdish support in southeastern Turkey, but even AK Party nominees in the June and November 2015 elections, such as the prominent Kurdish politician Orhan Miroğlu, publicly stated on many occasions that they could not conduct a political campaign outside of the city centers due to the frequent physical attacks and death threats to their members in most districts and villages. The PKK signaled its open support for the Peoples' Democratic Party (HDP), which garnered as much as 93.5 percent of the vote in Cizre, for example, a town with over 100,000 residents. It is extremely unlikely for any political party in a multiparty system to garner 93.5 percent of the vote in a free and fair election in such a big town. The nationalist and Islamist Kurdish political parties, such as the Free Cause Party (HÜDA-PAR) and Rights and Freedoms Party (Hak-Par), are also marginalized by the PKK. Miroğlu and other dissident Kurdish politicians provide concrete examples and have reason to suspect that the PKK used violent intimidation to rig the elections in order to manufacture an electoral landslide in Turkey's Kurdish southeast.

Some Western intellectuals' sympathy and support for the PKK and PYD also follows the pattern set by their Soviet predecessors. Many Communist intellectuals in France and Italy during the Cold War were very critical of what they derided as "bourgeois" democracy in their own countries, and they openly supported the totalitarian one-party regime in the Soviet Union as a more democratic regime, however unbelievable this may sound in retrospect. Authoritarian (Egypt, et cetera) and totalitarian (Saddam's Iraq, et cetera) regimes have been the source of Middle East's problems and the PYD's one-party regime in the making in Syria is not just unlikely to solve, but more likely to deepen those problems.

Middle East needs multiparty democracies based on negotiation and representation of popular opinions, and not militarized one party regimes relying on ideological minorities.