The test of Turkey's welfare regime with the Syrian refugees 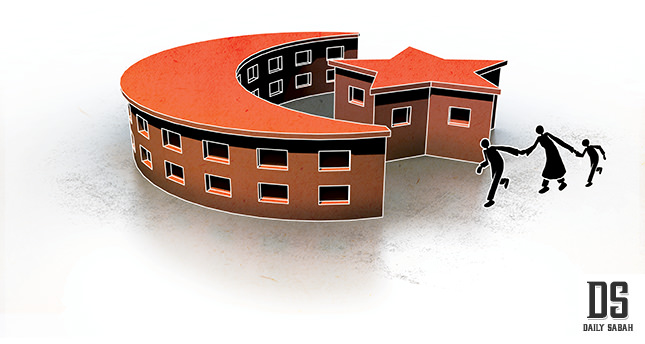 While Europe is quickly moving away from European values over the test of Syrian refugees, Turkey hosting more than 2.5 million Syrian refugees with $8 billion spent on their needs so far, stands as a role model

It is now a well-known fact that refugees are regarded by many across Europe as welfare exploiters. Not all, but many Europeans are from the far right on the political spectrum, referring to migrants with several negative terms such as "the strange others," "uncanny foreigners," "welfare exploiters" or "welfare dependents." No need to mention that for the far right, migrants are the "others" coming to exploit the glorious welfare states in Europe, to destroy the existing European social cohesion, to spread their nonsensical culture, to sexually harass European women and to threaten democracy by pouring their ill-minded jihadi ideologies into European schools of thought.

This perspective is not just lacking empathy for those who are fleeing a dirty war perpetrated by a brutal regime that has, according to Amnesty International, already killed 250,000 of its own citizens -- it is also simply racist. It is a pity that this racist perspective against those who are seeking refuge in the name of humanity is not just spreading across the far right in marginal political circles across Europe; the cancer is also metastasizing in the central core of European politics. The passing of a controversial law in Danish parliament allows for the seizure of refugees' cash and valuables to pay for their settlement is the most recent example that the problem is spreading. As John O'Brennan, a professor of European politics at Ireland's Maynooth University, put it, this symbolic act brings to mind the policies of the Nazis.

So, while Europe is quickly moving away from its core values while tested by its waves of migrants, not all countries are failing this test around the globe. Here, I want to discuss whether the myth about refugees as exploiters of the welfare state is factual by presenting the Syrian refugees' test on Turkey's welfare regime. The evidence I will present here proves that the treatment of refugees is not the same everywhere.

As soon as the major fight by Syrian leader Bashar Assad's regime started against its own people four years ago, Turkey implemented an open-door policy for those seeking refuge from the violence in Syria. Today, according to official figures from the United Nations Refugee Agency (UNHCR), 2,503,549 Syrian refugees were in Turkey as of Dec. 31, 2015. Unofficial figures say that number exceeds 3 million. In other words, 3 million citizens of the Syrian Arab Republic with diverse religious and ethnic backgrounds have fled to their immediate northern neighbor, Turkey, escaping the brutal war in their country, where barrel bombs kept falling on their heads on a daily basis and starvation reared its ugly head as the result of cities besieged by the Assad regime. The number of refugees coming to Turkey is increasing day to day. Just the previous week almost 10,000 more civilians fled from the Turkmen Mountain region as a result of Russia and the regime bombing civilian-populated areas.

According to the Prime Ministry, as of the end of 2015 the Republic of Turkey has spent $8 billion for these refugees. The expenses are being paid from the national budget. The international community has contributed to this expense only with a small amount of $455 million - or, in other words - 95 percent of the cost is directly being paid by Turkish taxpayers.

There is no need to say that taking in nearly 3 million refugees in a couple of years would be a serious challenge for any country. It is a challenge not only in terms of expenses but also socially and politically. It is a double challenge for Turkey, as the country is less wealthy compared with many European countries. Still, as the UNHCR and many impartial others have emphasized, Turkey has done a great job in dealing with the refugees.

The case of temporary protection centers: how has Turkey's administrative capacity and welfare regime been coping with this rush of migrants?

In the first place, a significant number of Syrian refugees in Turkey - 270,000 as of Feb. 1, 2016 - live in the 26 asylum center refugee camps across the country, or temporary protection centers as the government refers to them. These asylum centers are not like those we see as abandoned, dirty and godforsaken places in the suburbs of Paris; they are highly qualified, and, as the UNHCR said on a visit to Turkey, comply with international standards in many ways. All the centers have their own security, electricity, heating, water, baths, refectories, laundry, scullery and sanitation infrastructure. All have their own markets, health clinics, communication, fire departments, designated worship areas, interpreting services, post offices, banks, psychological and social counseling, and education facilities. They even have recreational facilities with play grounds, nurseries, television rooms and Internet services. There are also educational and vocational training facilities.

All of these are free of charge. No one has even thought of charging refugees or confiscating their valuables to pay for their stay at any time, in any way. It has to be underlined that the U.N. has presented Turkey's asylum centers as good with the high standards they have.

What about the refugees living outside of camps? More than 90 percent of the Syrian refugees in Turkey live in towns and cities spread across the country from one side to the other.

All the Syrians who live outside of asylum centers benefit from Turkey's welfare regime in many ways. The most significant aspect is healthcare. Syrian refugees benefit from all public hospitals and public medical units, free of charge, not just in cases of emergency, but with full coverage, including eye and dental care, cardiology and oncology. All of their medical expenses are paid for by the relevant governorship from the budget of social assistance and solidarity foundations. Syrian refugees are able to get their prescribed medicine from private pharmacies free of charge and the invoice is paid to the pharmacies later by the Prime Ministry Disaster and Emergency Management Authority (AFAD) and by the Social Security Institution (SGK).

You may think of Turkey's healthcare regime as far unqualified compared to European healthcare regimes, which is untrue. As the World Health Organization has stressed, Turkey has improved its healthcare system significantly in the last decade, thanks to the revolutionary Health Transformation Program of the 2000s. Thus, the service provided for refugees meets international standards in many cases and contains a full coverage.

Despite refugees being regarded as outsiders who come to exploit the welfare regimes in Europe, Turkey's welfare regime seems to embrace the Syrian refugees in many aspects. In addition to free healthcare, all poor and disabled refugees are entitled to several social assistance services provided by the Family and Social Affairs Ministry. Municipalities also provide significant amounts of aid and services for refugees.

Alongside the public sector, the private and volunteer sectors also comprehensively operate to meet the needs of Syrian refugees. Including the Turkish Red Crescent, the Humanitarian Relief Foundation (İHH) and Lighthouse Association and several nongovernmental organızatıons operate colossal aid organizations for Syrian refugees from food and clothing distribution to allowances for housing and daily expenses.

SERIOUS PROBLEMS IN THE JOB MARKET

To balance the argument, it has to be underlined that not all Syrian refugees live in good conditions in Turkey. Those living in the refugee camps are in quite fair condition, but this is not always the case for those who are outside of the camps. Although wealthy and middle-class Syrians who were able to bring their assets with them from their homeland or those living with Turkish relatives live in relatively good conditions, a significant amount of Syrian refugees live in the suburbs of cities in poor conditions. Some of them live in dilapidated houses or rent poorly maintained properties.

Another major problem area is employment. There is a serious problem in the employment of Syrian refugees in the labor market. As the government has delayed regulating the employment conditions of refugees for a long time, some opportunist employers exploit them, paying them far less than the national minimum wage and forcing them to work in harsh and unhealthy conditions. For a time, the picture of unregulated employment of Syrian refugees in the Turkish labor market became standard in the country.

THE RIGHT TO WORK IS RECOGNIZED

The Turkish government has recently started to intervene in this labor market problem regarding Syrian refugees. With the recently issued Regulation on Work Permits to Foreigners for those who are entitled to temporary protection status, Syrian refugees in the country are now entitled to work legally with the easing of the extremely difficult procedures to obtain work permits, specifically for them. In order to not harm its labor market, the government has set an upper limit of 10 percent for workplaces to employ Syrian refugees. Seasonal agriculture and livestock work is exempted from needing a work permits.

The recent regulation, which was published in the Official Gazette on Jan. 15, regulates the working conditions of Syrian refugees in the labor market as well. The regulation stresses that Syrian refugees are entitled to all the rights of the Labor Law and Social Security Law as Turkish nationals. The regulation also bans paying refugees less than the minimum wage. With this step a significant improvement has been achieved for including Syrian refugees to the country's formal Bismarckian social insurance regime, allowing them to earn their livelihoods without being exploited by unscrupulous people.

The recent regulation is being applauded by the International Labor Organization (ILO) and the UNHCR, as a constructive positive step toward recognizing the right to work of refugees and migrants in the country, and toward connecting them to the labor market.

AN EXAMPLE OF GOOD PRACTICE

Despite the positive and negative sides in Turkey's test with Syrian refugees, overall it has to be underlined that Turkey has done an impressive job, especially when compared to the Syrian refugees in Lebanon, Jordan and Iraq. Despite its limited welfare state, Turkey is doing better than the EU as well in terms of solutions to the immediate daily problems of refugees.

But still, long-term policy solutions are needed. Many of the refugees seem to stay in the country. Thus, rather than showing generous welfare provisions to meet their immediate daily needs, Turkey has to come up with long-term policies to absorb and assimilate refugees into the population. In other words, after giving $8 billion for refugees, Turkey needs to teach the Syrians in the country to fish rather than just giving refugees the fish.

Last of all, some may set forth that Turkey is not a comprehensive welfare state like Denmark or France or Germany, so it is much easier for the country to respond to the refugee challenge. It is true that Turkey's welfare regime is much less mature when compared to European welfare states. Still, Turkey's welfare regime has expanded and evolved hugely in the recent decade, and the country cannot be blamed for hesitating to share what it has in hand. Turkey's generous policies are an example of good practice for all, which shows that exclusionist and racist policies against refugees are not the only policy alternative for refugees and migrants. You may like Turkey or not, but Turkey definitely deserves to be applauded in the name of humanity for upholding the European values of solidarity, inclusion, interdependency and humanitarian aid in times while Europe is moving away from them.