Turkey, US and PYD: Strategic ally or local partner? 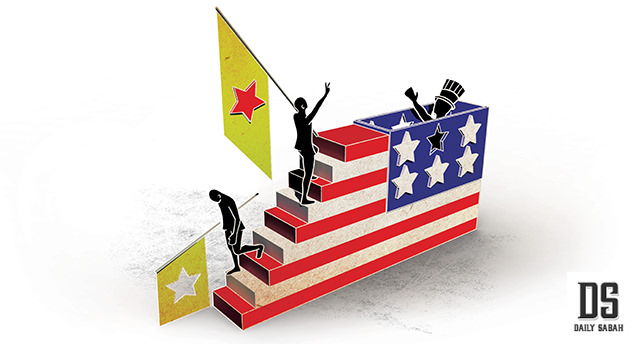 Under the hub of the U.S., a small number of highly motivated terrorists with simple weapons, good operations security and limited mobility like those from the YPG and PKK could undermine security in a large area in the Middle East

The Syrian civil war has brought new aspects to the armed and political struggle between state and non-state actors engaged in geopolitical competition in the Middle East. While the war was being fought on an operational and tactical level, the Russian military presence and Iran's direct military involvement escalated the tension and elevated the war to a strategic level, evolving almost into a state-level war. In addition, stable neighboring countries, including Turkey, are becoming more vulnerable to the Syrian civil war, which brings growing security and socio-political concerns and, more importantly, has resulted in new geopolitical costs not only for Turkey's regional strategies, but also its politics of alliance in which the U.S. has traditionally has been at the center. Therefore, as the main driving force behind the new Middle Eastern geopolitical melee, the Syrian civil war is now becoming another façade in which the U.S. and Turkey have different framing and political strategies concerning the political and military ambitions of Syrian Kurds.

The U.S.'s political strategy in defining and supporting the Syrian Kurdish Democratic Union Party (PYD) and its military aid to its armed People's Protection Units (YPG) is a potential political crisis between Turkey and the U.S. The U.S. officially has a clear-cut strategy regarding the YPG as is seen from a recent U.S. Department of State briefing: "We don't consider the YPG a terrorist organization, and they have proven successful against ISIS [DAESH] inside Syria." However, from the perspective of potential geopolitical consequences, U.S. military and political strategy are not only ineffective considering the U.S.'s over-reliance on YPG forces as the primary ground force in the fight against DAESH, they are also dangerous in terms of undermining Turkey's homeland security, territorial integrity and, even worse, jeopardizing the U.S. and Turkey's longstanding strategic cooperation on many crucial issues concerning geopolitical upheaval in the Middle East. More importantly, due to the U.S. President Barack Obama administration's position on the YPG, which is an integral part of the PKK, officially recognized as a foreign terrorist organization by the U.S., the U.S. is also losing its moral compass to find the true stance in fighting global terrorism. There are many pitfalls that undermine the U.S.'s overall strategy both in the fight against DAESH and for the future of the U.S.-Turkish partnership.

Firstly, the YPG is playing a vital role for the PKK's ongoing terror attacks against the Turkish state. It is well-known that the YPG is tactically used by the PKK as an integral part of its irregular warfare strategy both in terms of man power band military equipment in the fight against the Turkish Armed Forces in eastern Turkey. While pursuing its own homeland security and interests in overseas irregular warfare environments, the U.S. tries to diversify its allies and partners. The two important irregular warfare instruments that caused the U.S. to get involved in the Syrian civil war are supporting insurgency movements against Syrian President Bashar Assad's regime and countering DAESH terrorism. In the U.S. concept of irregular warfare, counterterrorism operations are presumed to support a counterinsurgency - not an insurgency - as well as stability and other major operations, and this concept depends on coordination and collaboration with U.S. allies and partners in the theater of operation. Hence, this type of operation is not supposed to bolster a possible insurgency movement jeopardizing the homeland security of a traditional ally country. The U.S. flip-flop to position the PYD and YPG somewhere in the conceptual trickery drives many doubts about its exact stance on Turkish security. While fighting against DAESH in Syria, the U.S. seems to create an insurgency movement supporting the PKK through the YPG. More importantly, while shifting its policy priority from supporting insurgency to countering DAESH, the U.S. has created a space for undesired actors such as the PKK and Russia in Syria. PKK became more active in Syria and affiliated with the U.S.-backed YPG and the Syrian regime regained its strength due to Russian support.

IN THE PRETEXT OF FIGHTING DAESH

An American citizen who fought in YPG ranks said: "There often seemed little to distinguish the 'terrorist' PKK and America's YPG friends, Westerners who fought alongside the Kurds. PKK militants would become YPG fighters by changing fatigues." Confirming this statement, PKK terrorist Polat Can has become a YPG spokesman and accompanied the U.S. presidential envoy for the Global Coalition to Counter ISIL, Brett McGurk, during his visit in Syria. Another visible relation between the YPG and PKK is the Patriotic Revolutionary Youth Movement (YDG-H), the PKK's youth branch, which has rebranded itself the Civil Defense Units (YPS) and is the urban fighting element. The YPS now flies a flag identical in design to that of the YPG, albeit with different colors. The PKK and YPG's military songs are even the same. Locals in Diyarbakır have confirmed that many newly recruited PKK fighters fled to Syria, experienced urban warfare, came back to Diyarbakır and initiated the urban confrontation with Turkish security forces. YPG fighters in Syria become YDG-H, YPS and People's Defense Forces (HPG) members when they operate in Turkey. There are claims U.S. weapons and ammunition support for the YPG end up with the PKK. Omer Mamas, a former YPG militant, said in an interview that the weapons dropped by the U.S. were shipped to the PKK by YPG in the vicinity of Suruç and Qamishli.

Thirdly, in addition to Turkish border security, a PYD-controlled corridor along the Turkish border is a big security concern for different ethnic groups who live in northern Syria. By intentionally ignoring ethnic balances in northern Syria, the PYD is pushing offensive geopolitical ambitions on other ethnic groups. Soon after the capture of Tal Abyad by the YPG in mid-June, 2015, some of the Arab residents of the city who had to leave their home told Al-Jazeera: "We left because of the airstrikes - this was the main danger - but we were also told to leave by the Kurds. . Some homes were taken by the YPG." As the PYD and YPG consolidates and secures its territorial gains in northern Syria with the help of U.S. military assistance, the Free Syrian Army (FSA) is being crushed by Russian, Iranian and Assad's military power and more refugees are forced into Turkey. The YPG is also part of a collective military offensive with assistance from Russia, the Syrian regime and Hezbollah in the fight against moderate opposition groups in the ongoing conflict in Aleppo. Therefore, the U.S. should be aware that the YPG is one of the main actors responsible for the refugees fleeing Aleppo toward the Turkish border

More importantly, Ankara believes that supporting the YPG in the fight against DAESH is not a well-designed political or military strategy and is also a main strategic pitfall for the future of the Syrian crisis and the U.S. and Turkey's long-standing strategic cooperation. The shortcomings of this strategy are that DAESH will not be defeated completely, the Assad regime is more powerful with Russia involved in Syria, the Syrian opposition is losing its belief in Western powers and the PYD and PKK poses a threat to Turkey. In addition to the security and political outcomes of this strategy, more refugees from the Syrian civil war will knock on Europe's doors. Articulated as such, the U.S.'s military and political engagement with the YPG will eventually be the main driving force behind mass human migration toward Europe.

Based on these three dynamics, the PKK has pursued its operational and tactical goals during Syrian civil war of easy access to military equipment and instruments in Syria, geopolitical expansion attempts in Syria and urban attacks and interaction in Turkey. Setting aside the YPG from the PKK can only be considered the product of an ignorant ally or an evil-minded enemy. The U.S. also points out that the rise in sectarian and ethnic conflict has increased hostilities in other countries and made terrorism commonplace. Favoring the balance between a terrorist partner and a state ally will probably cause a loss in U.S. legitimacy in pursuing security in other countries. Therefore, using the YPG - a terrorist organization - to defeat DAESH -another terrorist organization - is not only a wrong strategy, it is also ethically problematic in countering global terrorism. Intentionally or not, the U.S. is creating new causes for new conflicts in the Middle East for years to come.

Last but not least, as an ally, the U.S. is expected to be aware of maintaining Turkey's security in an unstable environment. If not, under the hub of the U.S., a small number of highly motivated insurgents or terrorists with simple weapons, good operations security and limited mobility like those from the YPG and PKK could undermine security in a large area in the Middle East. The PYD, YPG and PKK are politically two faces of the same coin. Therefore, assuming the PYD and YPG are different from the PKK is very deceiving.