Pakistan back to center stage in solving Afghan tangle 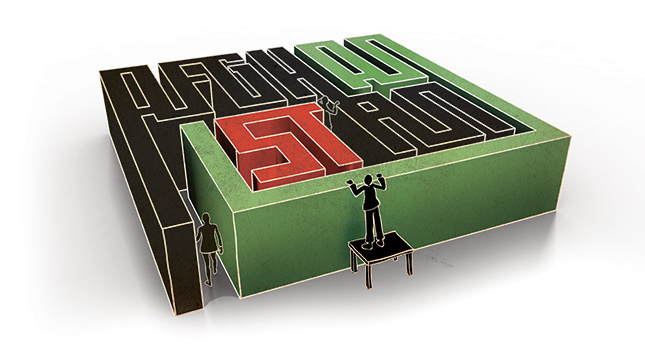 All the stakeholders including the Afghan government, Americans, Taliban, the Pakistanis as well as the other foreign actors know that military confrontation is not the solution to end the war in Afghanistan and that a political solution is needed

The Jan. 11 meeting of the Quadrilateral Coordination Committee (QCC), involving representatives from Pakistan, Afghanistan, China and the United States, was held to draw a road map for the reconciliation process in Afghanistan. The QCC talk must have come as a reality check for many regional players looking for their stakes in the end-game negotiations in Afghanistan. The next round of QCC talk was held on Jan. 18 in Kabul. Officials from the four nations met again on Feb. 6 in Islamabad. In a statement following the third round of talks, officials said that the QCC member countries "agreed to continue joint efforts for setting a date for direct peace talks between the representatives of the Afghan government and Taliban groups expected to take place by the end of February 2016."

After many conferences, dialogues and meetings around the world, the pivot of the Afghan end game is now anchoring once again in Islamabad. The new negotiation formula has emerged as a 2+2 dialogue where the two global powers will sit with Afghanistan and Pakistan to chart out the direction of the Afghan peace process.

The recent round of talks by the four countries held in Islamabad and Kabul was an effort to prepare a modus operandi to resume the nascent talks between the Afghan government and the Taliban. The first round of direct face-to-face meetings between Afghan government and Taliban representatives was held in July of last year in Murree, a scenic resort town near the Pakistani capital Islamabad. The proposed second round of talk could not take place due to the announcement of the death of elusive Taliban supreme leader Mullah Mohammad Omar, which had remained a closely guarded secret for two years. A succession struggle erupted within the Taliban after the subsequent belated confirmation of their supreme leader's death. Pakistan-based Taliban members appointed Mullah Akhtar Mohammad Mansour as their new supreme leader. They are a breakaway faction that was against the dialogue appointed another leader – Mullah Mohammed Rasool Akhund – and they vowed to carry on with their fight against the Afghan government backed by the West.

Another group that claims to be the local affiliate of DAESH in Khorasan is actually a bunch of Tehrik-i-Taliban Pakistan (TTP) remnants that crossed over to Afghanistan after a massive military operation led by Pakistani security forces in their tribal area. Pakistan needs active cooperation from Afghan authorities to tackle this group.

Despite the fact that the Taliban is no longer a homogenous group like it was before, most analysts still believe that even though four countries may be talking, the crucial role in paving the path to peace in Afghanistan will be played by Pakistan, which continues to exert considerable control over a large faction of the group.

The pivotal shift to Pakistan for finding a solution to the Afghan stalemate has already confirmed the return of the Taliban to the power structure of the country. Only the Taliban's role in the future power arrangement will be part of the subsequent negotiations in the Afghan end game.

NEW ROLE FOR CHINA IN THE AFGHAN CRISIS

Even though representatives from the Taliban were reportedly not invited to attend the three rounds of preparatory talks, an envoy from the group said that two Taliban delegates, currently headquartered in its Qatar office, will soon meet with the interlocutors from China. The meeting will take place in Islamabad under the auspices of Pakistan.

After 14 years of the U.S.'s rigorous military efforts, Afghanistan still remains very fragile. Afghan security forces are not capable enough to fight multiple battles at a time, as the Taliban always emerges in one city or another after every battle to control some new cities.

At a time when the U.S. is looking for an honorable exit from the Afghan imbroglio and for ways to reach some transitory resolution in Afghanistan, it now firmly believes that the only country that can deliver some a kind of peace in Afghanistan is Pakistan.

Media reports from the United States also suggest a lowering of tensions with China in the new Afghanistan-Pakistan strategy, with senior officials being quoted as saying that they do not see China as a competitor to its relations with Afghanistan and Pakistan. The U.S. is now closely coordinating with the Chinese on Afghanistan.

The fluid ground situation in Afghanistan has forced the major players to rethink their strategy for the Afghan peace process. The Americans are fatigued, the Afghan government is militarily weak and politically fragile, the Taliban has internal tribulations and Pakistanis have already suffered a lot in the last 15 years. As a result, all the stakeholders know that military confrontation is not the solution and that a political solution is needed to end the war in Afghanistan.

In an important development, Afghan President Ashraf Ghani has offered direct talks with the Taliban, referring to them as political opponents. His message was conveyed during a two-day meeting in Qatar organized by the Pugwash Conferences on Science and World Affairs to resolve the war in Afghanistan.

SINCE 9/11, VARIOUS ORGANIZATIONS AND WARS

Whatever the U.S. says or regional powers demand, the much touted Afghan-owned and Afghan-led process has now become a Pakistani-owned, Pakistani-led process.

The Taliban, which has so far rejected direct talks with the Afghan government, has reiterated their demand to speak to the Americans first along with the fulfillment of a few pre-conditions. They asked for the release of some high-profile prisoners, removal from a United Nation blacklist, unfreezing their assets and removal of travel bans on its leaders and the formal recognition of their political office in Doha.

Relations between China and Pakistan are historically very close and strategic in nature. With multi-billions of dollars, the China Pakistan Economic Corridor (CPEC) has entered into the implementation phase and China wants to stabilize Pakistan for the smooth execution of the multifaceted project. China knows very well that to stabilize Pakistan Afghanistan needs to be stabilized first. In the same vein, China's interest in Afghanistan shifted a few years ago from the economic to the strategic in nature. In addition to China's grand plans for a Silk Road Economic Belt linking its central and western regions with Europe greatly depend on the security situation in Afghanistan and Pakistan.

Suffice it to say here that China and Pakistan are working in unison on how to resolve the Afghanistan stalemate and, most importantly, they are in close contacts with both Ghani's administration in Kabul and Taliban representatives.

Signs are now evidently clear that it is the China-Pakistan axis that holds the key to resolving the final outcome of the Afghan impasse in which United States' role has denigrated to a mere facilitator and other regional powers are more or less out of the final equation. And it is better for them to be kept outside if the Afghan tangle is to be resolved as soon as possible. Too many cooks with their own vested interests must not be allowed to spoil the broth.