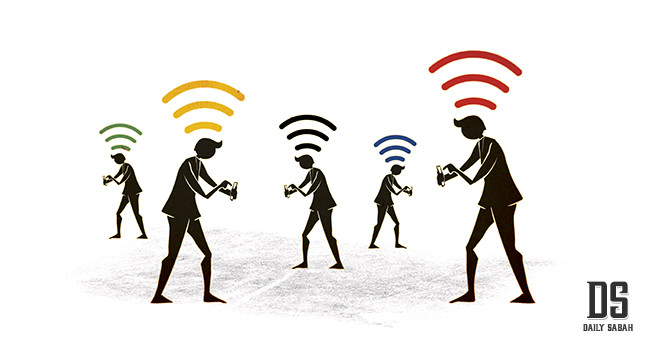 The dilemma of the digital divide is in many ways akin to that of a revolution that eats its own children. Both are fueled by the same power and then a horizontal lift is achieved for ordinary people, but power aggregates in the hands of the elite.

We discussed this recently in a panel hosted by the Union of Chambers and Stock Exchanges of Turkey (TOBB) for World Bank's digital divide report, which was this year's theme. At the same event, the government signed an entrepreneurial fund for venture capital as funds of fund. It was the moment we heard from the TOBB president that the fund distribution has to be subjective and not egalitarian by bureaucrats.

Digital divide is a term coined to identify the gap between connected nations and not-yet-connected nations. It is not restricted to comparing individuals living in the same city, the rich and urban young population against non-tech-savvy suburban, old or handicapped population.

The dilemma we try to shed can be contorted in several ways concerning connectivity, equal opportunity and the accumulation of wealth.

The connectivity problem can be solved either by novel technology or financial power. If there is an infinite fund, one can cover the entire world with today's technology or, if we found a very low cost technology, then coverage is an issue that can be solved today.

In this respect, we need to seek motivation to connect those 4 billion people. In a traditional view, one can think that this is the duty of our mobile operators or our governments, but neither are innovative when it comes to low cost technology nor do they have that much financial power. In fact, even mobile operators have been surviving with shrinking earnings before interest, taxes, depreciation and amortization for years.

The same concept is not far from a historical stratum that exemplifies the same motivation that has traversed fairly distinct stages of economic evolution and has been successively superimposed on each other as the edifice of capitalism was built.

COLUMBUS SAILED TO TECHNOLOGYChristopher Columbus was an Italian explorer and performed expeditions with funds from the Spanish monarchy. He completed four voyages across the Atlantic Ocean and started the settlement and colonization in the accidentally found New World, the America for Spain. He was not the first to step on the Americas. The Vikings were there hundreds of years earlier and Chinese and Muslims claim that they discovered it first. However, what makes Columbus important is the economic and political readiness of the era he was living in.

The late 15th century was in the Renaissance, an era of enlightenment in Europe that spurred a new economic order. European kingdoms and empires almost equal in power found themselves in fierce competition. They were boxed in on the continent and their main source of wealth was trade, and the road east was controlled by the Ottoman Empire living at the peak of its power.

To survive, one kingdom could literally eat another. This led them to innovation and taking risks to find alternate trade routes east to India to reduce the cost of trade and become competitive. Surprisingly, their return on investment was something amazing - a new continent where they could suck their wealth and manpower with almost no cost. This led to splendor for Spain and let grasp much territory under its rule toward world domination.

Now, the same motivation is resurrected in digital monopolies, not for expeditions to untapped land, but technological excursions to forgotten populations. They face the same challenges since their growth is squeezed in a dog eat dog ecosystem.

The comparison with the Renaissance is particularly apt for several reasons. The current age of enlightenment stemmed from IT technology so far being coined the "Second Renaissance." There are even studies that compare the San Francisco Bay Area, home of Silicon Valley to that of Venice. In addition, Venice's political standing against Rome is similar to Silicon Valley's political standing against Wall Street.

Our presumption that the world economy is going toward a monopoly economy does not need that much evidence. Before, there was a choice between perfect competition and creating national champions. Governments chose perfect competition for basic needs and services. In the digital economy they were caught unprepared and companies produced growth that is almost irreversible. Governments are not the ones they fear, they hold guns against other potential monopolies. Imagine if one of them reaches the first billion of this 4-billion-strong population of unconnected people, as it would upend the market and eclipse its competitors. In a crude calculation, two years ago Facebook acquired WhatsApp for $19 billion at a time when it only had half-a-billion subscribers with zero revenue. Hence, Facebook paid $40 per subscriber and getting the next billion subscribers could then worth $40 billion. No wonder they spent a few billion dollars on this technology to invent a low cost connectivity solution.

Google's solution to this is balloons. Balloons will use air currents in the upper atmosphere and travel around the world to emit wireless signals to earth. It was a concept Japan invented in World War II to bomb the west coast of the United States. They killed a single person but the same concept is now being re-visited for the greater good of connectivity.

Facebook is working on using drones for Internet service and for awareness they founded the internet.org foundation for the acceptance of connectivity as a basic need of humanity.

Besides the major contenders there are others that are getting prepared for a hard punch. Solving this problem will be a triumph to enable the consolidation of all operators and social network companies.

SpaceX is working on reusable rockets to carry cargo to space. Since Neil Armstrong first stepped on the moon in 1969, the average cost of sending 1 kilogram of cargo to space costs $19,000. If they can introduce a substantial reduction in cost with reusability, they want to send almost 4,000 satellites into low orbit for connectivity. Similarly, Virgin Galactic founded the OneWeb consortium to send satellites 1,200 kilometers into the orbit. Note that our GPS satellites are at 36,000 kilometers and, in space we have 1,100 active and 2,600 passive satellites in orbit, including Sputnik 1, the first satellite sent to space by the Soviet Union.

Let us imagine that we connected the rest of the 4 billion people to the Internet. This advancement will provide those populations equal opportunity for inclusiveness and at the same time remove the barriers for monopoly companies to grasp their local markets. Inclusiveness will, however, first hit their land and cause unemployment. For instance, the job market is literally extinct in Stockton and Fresno, California in the same situation that happened to Detroit before. Both were on the crossroads of highways and an hour drive to Silicon Valley, which has been the most wealth-producing location on the earth since the 1980s. This cycle is in evitable.

These new populations will strive for success with their ability to focus. The emergence of focus as a principal factor in success is linked inextricably to the almost free availability of other factors such as knowledge and expertise to ordinary people, so digital progress would be much equalitarian in its consequences. So far, the connected world is becoming cursed by losing its ability to focus due to rich availability of attention deficits.

This might be short lived since their job market is also at stake with the investments of monopolies in automation. Automation will redefine the job market and, according to a report from the World Economic Forum, the first jobs that will be lost to automation with 90 percent probability will be those done by credit clerks, receptionists, paralegals, cab drivers, chauffeurs, security guards, fast food cooks, bartenders and personal finance providers and, with 50 percent probability computer programmers. Also, journalists, artists, lawyers, primary school teachers and doctors have a 10 percent probability of being replaced by robots.

These are flattening waves to economies across borders. They lift up the poor but still give more to the rich elite. The unhappy part of this equation will be the extinction of the mid-size rich population. They are forced to go left if they cannot go right. New technologies eventually will solve the problem of ordinary people, which have been food, shelter and clothing from the start of history, and then sanitation, education and health provided for equal opportunity. So far, for example, global food production can feed the entire population. The problem is in distribution technologies. This has to be addressed by advancement in social entrepreneurship. Maybe in the new era, definition of right and left in politics might change. Throughout history, the right has focused on production and the left has focused on forced distribution. Now entrepreneurship could be the new right and social entrepreneurship could be the new left with voluntary distribution.

These will conflate the disparity between rich and poor in order and one may be formulated like that of Moore's Law. If I want to give the first shot, I would fit the curve into a radar signal. The top and bottom of the next cycle are respectively bigger than that of the current and every cycle, top and bottom, widens. The quantification of the periodicity and length of disparity is left to people who will play with actual data if this conjecture is correct. The Gini coefficient, for instance, to describe the equality in connectivity would be a great input. So far it has had three jumps toward inequality since 1980 with the introduction of digital phone systems, the Internet and smart phones. Every jump succeeded with a sharp decline in the scale economies toward equality.

In sum, our definition for developed, developing and under-developed countries might become irrelevant to region over time and shift to higher granularity toward people in order to define them as developed, developing or underdeveloped. In the long run, the tax regime of a country would not be enough to distribute wealth within it. Our spearheading example is the United States where top 1 percent holds 40 percent of the wealth and lowest 40 percent lives hand to mouth.

The genesis of this flattening cycle has to be taken as an indication of a new order and not merely homework for us to empower our people to focus on innovative distribution technologies, but also to go right and introduce one or two monopolies in order to become this affluent elite.

*Associate professor in the College of Engineering, Koç University. @mstfrgn