Turkey is at crossroads in Syria war 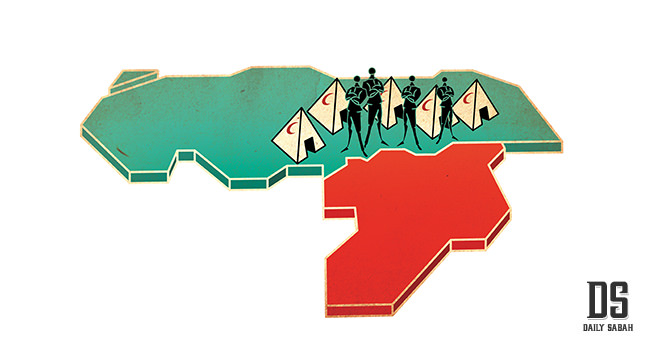 Turkey is trying to defend its national borders which are under the threat of the PKK, PYD, YPG, the Assad regime and Russia

The world is witnessing the unprecedented suffering of a fully-fledged five-year war in Syria, which has caused more than 4.5 million people to be driven from their homes and a further 6.5 million to be people internally displaced. It is a heart-wrenching tragedy that almost each week Syrian asylum-seekers including children are being rescued from an overcrowded sinking boat in the Aegean Sea but not all of them are as lucky as the survivors. Sometimes the Coast Guard is unable to save war-weary asylum-seekers and they find migrants washed up on the shore or just missing as they attempt to cross the Mediterranean. Since Russia plunged eagerly into the Syria civil war with an expanding campaign of airstrikes targeting civilians; the tragedy was expanded and Syrian government troops besieged villages located in the northwestern province of Idlib. Village residents in places like Madaya are obliged to live off water and salt and people are reported to have died of starvation and children are dying of malnutrition, releasing images on social media.

Beyond any doubt, Turkey is a witness to the humanitarian tragedy more than any other Syrian asylum-seeker-receiving country. Due to the intensive migration flows since the Syria upheaval started up, more than 2.5 million Syrians have fled their country of origin and arrived in Turkey. As the perpetual civil war enters its fifth year, there isn't the slightest hint of light at the end of the tunnel. Despite the enormous support from the international community and the United Nations, there are not even any glimmers of hope for the prospects of a proposed cease-fire and there is as yet no hope for a solution to end the civil war. Having dragged thousands of foreign proxies and fighters into the battlefield, the state apparatus of Syria deteriorated to a large extent by means of various sub-state groups that have burgeoned and gained the relative autonomy to be able to launch a chaotic order. According to reporters and experts in the field, hundreds of armed groups are battling inside Syria in different regions against Assad and also intra-groups fighting are ratcheting up tensions in a precarious sort of balance. By the very nature of the ongoing conflict and rather crowded battlefield, some opposition groups are debilitating and succumbing to the intra-group struggle and some are rising up, benefiting from a surge of interest from both Washington and Moscow. The Syrian branch of the PKK, the People's Protection Units (YPG), has gained enough leverage, backed by Russian airstrikes, to sweep into embattled villages in the northern provinces of Aleppo and Idlib in recent weeks and are now rolling on to the town of Azaz on the border with Turkey. While YPG forces are gaining ground, indigenous anti-DAESH opposition forces such as "Furqa al-Sultan Murad," the "Northern Division," "al-Mujahideen" and a coalition called "Jabhat al-Shamiya" are languishing, groups that could front-line combatants against DAESH.

THE YPG IS GETTING STRONGER

Apparently, the course of the war has changed a lot since the YPG forces advanced its own position on the ground and played into Assad's hands by dragging out both Turkey- and U.S-backed opposition fighters in Aleppo. With strong Russian and U.S support, the Democratic Union Party (PYD) has facilitated its territorial position and advantage ever since the U.S government found the PYD a reliable partner in northern Syria in the fight against DAESH. Obviously, while the PYD and its armed forces, the YPG, are indispensable partners of both Russia and the U.S.; other aforementioned anti-DAESH opposition forces are intermittent ones. As is well known, neither the U.S. nor Russia is preoccupied with overthrowing the Assad regime. It seems as if both proxies are engaged with fighting DAESH, however it is just a delusive facade to keep warm the conflicts in the region and save time for Assad to regain his power in the future long-awaited peace talks. The YPG has received U.S training and most probably the U.S favors for the YPG as a manipulative ally in the region, therefore, U.S. officials have no intention of classifying the PYD as a terror organization like the PKK.

Turkey's pressure on the U.S to cease support for the PYD forces intensified when the two strategic key villages Zahra and Nubul fell into the hands of the Kurdish YPG militia. In addition, they approached Azaz, which is the last rebel stronghold and a supply route from Turkey to the opposition forces, which made Turkey's objections grow more strident. As a deterrent, Turkey yielded artillery fire against YPG positions as a precautionary measure. Turkey is now at crossroads, based around the reality that Turkey's longest land border is not with Syria but the YPG and DAESH. Moreover, after the terrorist attack targeted military vehicles in Ankara, Turkey's officials announced that the people behind the blast were affiliated with the PYD and the PKK as Ankara wages campaigns against PKK rebels in southeastern Anatolia.

THE IMPORTANCE OF BUFFER ZONE

Taking into account all of the recent developments in the region, Turkey's foreign policy has shifted gears to a defensive position rather than a preventive one, which is largely what it was like in the initial phase of the Syrian unrest. After the recent developments, Turkey is contemplating a buffer zone 10 kilometers within Syria including Azaz in order to prevent a Kurdish-controlled corridor along its border in northern Syria. Turkey also aims to stop the large influx of asylum-seekers that moved after Russia's entry into Syria, a leading game-changer. Nevertheless, drawing up plans for a possible buffer zone should be reconsidered delicately owing to the fact that during the 1990-1991 Gulf War, former President Turgut Özal came on strong over the creation of a no-fly zone, which paved the way for a de facto Kurdish autonomous region. In addition, it is not for sure which countries will protect the borders with a concentrated military building up to crack down on Syrian Kurds while both the U.S. and Russia are watching their back. As various experts emphasized, if Turkey weights a buffer zone on the Syrian side of the common border, this would pose a serious threat for Turkey rather than the civil war itself in Syria because the creation of a buffer zone entails defending the zone constantly, which is definitely not a cost-effective way of preventing a massive exodus of Syrian asylum-seekers and PKK militants. One thing is for sure, Turkey is at a crossroads in the Syrian war more than ever before. The question is everyone asking how Turkey defends its borders while Russia is turning more aggressive and menacing and Assad is out of control. It seems that the region will not come to terms with a new political equilibrium, until the last common denominator is found between Turkey and Syria.