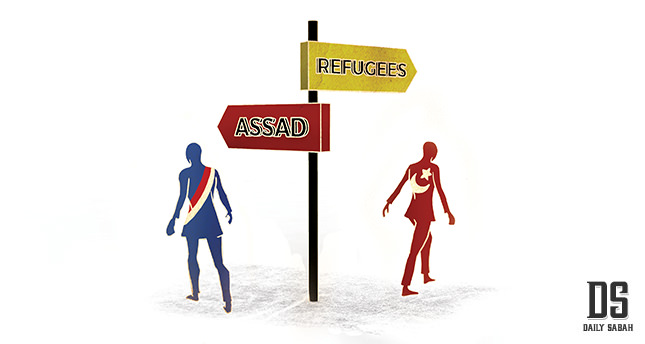 The existing tension between Turkey and Russia negatively affects many new projects, particularly those in the energy sector

With tensions running high and warmongering intense, Turkish-Russian cooperation is increasingly losing its gained momentum. What looked stable and solid just months ago is falling apart at breathtaking speed. Russian President Vladimir Putin declared that there is no state-to-state cooperation anymore at his nationwide press conference last December. "I will not travel to Turkey, and advise you not to go there, too," Russia's Foreign Minister Lavrov said addressing the Russian public at large. Days ago the Russian Duma initiated discussion on denouncing the 1921 Treaty of Moscow between Russia and Turkey that gained support of the Foreign Ministry. The Russian establishment and society have fallen out of love with Turkey surprisingly fast after Turkey shot down a Russian Su-24 bomber over the Syrian border on Nov. 24, 2015.

Not long ago Turkey enjoyed in Russia a status of the most preferred travel destination with more than 4 million Russians coming annually for vacation surpassing the long-term German champions. Today, Turkey has turned into a place that Russian travel agencies advise their clients not to go to and fear penalties for advertising trips to Turkey on their websites.

Construction is another part of the sanction Russia imposed on Turkey. Until very recently, Turkish contractors' professional approach and high quality of performance were well-appreciated in Russia. Today, the import of Turkish services is forbidden while red tape is back and restrictions are placed on contracts still under completion. Last December more than 50 Turkish contractors were granted permission to carry on their ongoing projects in Russia, but Moscow's shutdown of the visa-free regime for Turkish nationals from Jan. 1, 2016 can only negatively affect their construction efforts. In addition, in January, Putin revealed plans to gradually replace Turkish contractors with domestic companies, which will further impede the Turkish presence in the Russian construction industry.

Trade is a loser as well with the ban imposed on the import of Turkish goods. Its volume experienced a dramatic increase during the past decade and rose from $6.8 billion to $32 billion by 2013, and was expected to go as high as $100 billion by 2023, a goal next to impossible to achieve under the present circumstances. By the end of 2014, Turkish goods and commodities exports to Russia accounted for no more than $6 billion while imports of Russian petroleum and gas stood at $12.8 billion, taking the lion's share of Turkish-Russian trade turnover.

ENERGY AS A BACKBONE

Energy cooperation has been the backbone of Turkish-Russian relations, in the field of natural gas in particular. Around 27 billion cubic meters (bcm) of Russian natural gas comes to Turkey annually to make it, as of January 2016, Russia's second-largest importer. A major consumer since the 1970s, Turkey became over dependent on the Russian supply with the launch of the Blue Stream submerged pipeline that today brings 16 bcm of natural gas annually along bottom of the Black Sea. Commissioned in 2004, the pipeline opened a direct line of delivery from Russia to Turkey safe from bottlenecks and risks of transit through conflict-prone countries. Praised up until recently as a smart move of Turkish-Russian energy politics, the Blue Stream could well now become a hostage of intergovernmental friction. Russia's gas could flow to nowhere but Turkey while Turkey could receive the gas from nowhere but Russia through the Blue Stream.

The Blue Stream pipeline was masterminded by Russia in the mid-1990s and initially met conflicting reactions from Turkey. Concerns were expressed about the heavy reliance on a single source of gas, although it was never fully taken into consideration. Today, Russia's share of Turkish natural gas imports reaches 60 percent while prospects are slim to meaningfully reduce it in the foreseeable future. On the other hand, gas is the prime source for development for the Turkish economy, and half of its imports continue going to power generation. There are expectations, however, that it will decrease to less than 40 percent in a couple of years.

During the past decade, reducing reliance on imports of Russian gas was high on Turkey's energy agenda, and certain progress was achieved. A breakthrough came in the 2007 launch of the Baku-Tbilisi-Erzurum South Caucasus Pipeline to bring Azerbaijani gas to Turkey, which reduced its overdependence on Russia, but accounts for just 10 percent of Turkish gas imports. Nevertheless, the development has proved once again that further deliveries from the Caspian region have potential to ensure stable diversification of Turkey's natural gas supply. With sanctions removed, there is now potential for gas-rich Iran to enter the market. Iran's market share of imports in Turkey stands at 20 percent. As of today, deliveries from the Caspian region continue to be modest in comparison to those coming from Russia, which is still Turkey's main source of natural gas.

Developments around the Blue Stream construction coincided with U.S.-backed plans to build the Trans-Caspian Gas Pipeline (TCP). It was masterminded to bring Turkmen gas to Turkey through Azerbaijan by crossing the bottom of the Caspian Sea. The TCP, which is proposed to have a capacity of 16 bcm, will be the Blue Stream's ultimate competitor. The Turkish energy market of the late 1990s could not stomach more than one import pipeline - a fact fully appreciated both by Russia and the U.S. It was apparent as well that the market winner would be the earliest commissioned connector to start delivering gas to Turkey.

Competition was tough and the pipeline race was intense. In July 1996 in Moscow, Turkey and Russia made their first intergovernmental agreements on the construction of the Blue Stream, and in May 1998 in Washington, an original endorsement for the TCP project was given by the U.S. and Turkmen presidents.

Finally, in November 1999, on the outskirts of the Organization for Security and Co-operation in Europe (OSCE) summit in Istanbul, the presidents of Turkmenistan, Azerbaijan, Georgia and Turkey, with then U.S. President Bill Clinton as witness, signed an intergovernmental memorandum of understanding and framework declaration that laid the legal grounds for the TCP's construction. Prior to that, Turkey had signed a purchasing agreement on Caspian gas to secure sufficient deliveries required to ensure the pipeline's feasibility. Clinton voiced the idea behind the project as an American dream coming true: "To ensure that our energy resources pass through multiple routes, not a single choking point."

The pipeline was to start from western Turkmenistan, cross the bottom of the Caspian Sea to the shore in Azerbaijan and continue to Turkey through Georgia. Upon delivering the Caspian gas to Turkey, it was to proceed to Bulgaria and eventually bring Turkmen and some Azerbaijani gas to Germany. The TPC was masterminded as a high-profile plan to establish a southern export route for natural gas from the Caspian to Europe bypassing Russia in order to ease the pressure of Gazprom's dominance on European consumers. Sadly, it never happened.

The TPC project never took off, and shortly thereafter a flashy ceremony in Istanbul was shelved in the spring of 2000. Plans for its construction went into oblivion and the TCP was replaced with the South Caucasus Pipeline that eventually started bringing natural gas from Azerbaijan to northern Turkey in spring 2007. Needless to say, Turkmenistan, with the world's fourth-largest gas deposits, still continues to be out of reach of European consumers while it steadily supplies the Chinese market.

If the TCP had been built and Turkmen gas had started coming to Turkey as planned by the end of 2002, then the world would be a different place now. Not only would European countries have a new, southern export corridor established for its gas imports, the deliveries would have come from the Caspian region as an alternative to Russia and would have combined reserves from Azerbaijan, Turkmenistan and potentially Iran. In turn, Turkey would have enjoyed the luxury of a balanced and diversified energy supply by receiving Russian gas from the western line crossing through Ukraine and Caspian gas from TCP and would not today be dependent on Russia for more than half of its energy supply.

Nevertheless, back in 2000, the EU and U.S. duly considered all the pros and cons associated with the TCP's construction and operation, and backed off to open the way for the Russia's planned Blue Stream. Russia grabbed the opportunity and successfully developed the Blue Stream, which resulted in launching an additional, southern export route for Russian gas deliveries to Turkey. This established connection strengthened Russia's position of a key natural gas supplier to world markets - the very position the EU and U.S. consider as undermining Europe's energy security.

The irony was that the U.S.'s idea of establishing a new export corridor in order to improve energy security on the southern borders of the former Soviet Union was brought to life by Russia for the opposite reason. The Blue Stream opened a new, southern export route for Russian gas - a corridor that Russia had never had before. It also gave an opening to Russia's even more ambitious plans to build a mega pipeline with a 63 bcm installed capacity to be called the South Stream. By crossing 900 kilometers along the bottom of the Black Sea, it was to take Russian gas to Bulgaria and to proceed to Serbia, Slovenia and eventually Italy, on one side, and Hungary and finally Austria, on the other.

Nevertheless, in spring 2014 the South Stream project ran into serious disagreement with EU energy policies and Russia failed to receive the required project approvals and had to shut it down for good the same autumn. The developments immediately brought into life a new project of a submerged pipeline, this time from Russia to Turkey called the Turkish Stream. Again with a proposed 63 bcm capacity, the projected pipeline is due to supply the Turkish market with half of its delivered volume of gas while carrying the rest to the Greek border where a gas hub for Southern European countries needs to be built. The highly ambitious plan could meet the interests of both Turkey and Russia, if put into life, but it, too, now faces an uncertain future due to the apparent deterioration of Turkish-Russian relations.