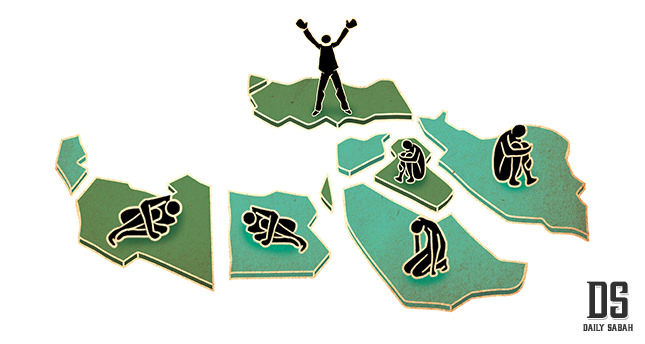 Radicalism, which has been wearing the Islam mask particularly since 9/11, appears as a form of governance in the Middle East via the clashes between pseudo-radicalized terror groups and the failed states

The word "radicalism" in association with the recent turmoil in the Middle East is perhaps one of the most viral words used in the mainstream media to draw links between Islam and the extremism that has been rising from a political power vacuum, or in other words, the absence of a bottom-up democracy backed by the will of the people.

While such an association is built on ahistorical and unsustainable premises, the philosophical and political meanings of radicalism are also ignored. As such, despite its wide usage in the news - and commentary covering the Middle East- the word is often used to describe vague situations without a clear understanding of what it means, let alone understanding or properly using such a loaded term in the context of the modern Middle East. Moreover, the mainstream media frequently falls into the mistake of associating such loaded negative terms with the entire population of the Middle East specifically and Islam generally. While the violent acts of some must be recognized and classified as radicalism, the mainstream media does not stop itself from falling into the fallacy of hasty generalization.

Two steps must be taken in tackling this problem. First, various academic approaches and discourses of radicalism, extremism, violence and terrorism must be thoroughly analyzed. Furthermore, such analyses must investigate specific contexts and histories to avoid providing weak, one-size-fits-all definitions. Second, the variable context associated with radicalism, which in this case is the Middle East, must be discussed through historical and critical lenses.

Here, while acknowledging the necessity for taking both steps mentioned above in sequence, as they complete each other, for the sake of this article, one historical approach and the causes behind the rise of radicalism in the modern Middle East will be discussed.

In broad terms, radicalism can be defined as believing or expressing the belief that there should be greater social or political change. In the Middle Eastern context, the rise of demands for such changes in the recent century, and more specifically in the latest decade, implies that there have been certain social, political and economic dysfunctionalities in the formation of the nation-states designed after the breakup of the Ottoman Empire.

If we take radicalism as a reaction to a dysfunctional mechanism that affects certain social groups imposed by governing bodies, then the need to examine these governing bodies arises. For instance, if the formation of state structures and relationships within the state in addition to the state-public relationship in Turkey, Iraq, Syria and Egypt is examined, it can be realized that the state structure and relationship is built in a way that one's existence and power is realized through the maintenance and simultaneous power of other institutions. In simple words, the power and maintenance of the judiciary, for example, can rely on the power of its relationship with the military or the power of capital can depend on its relationship with the bureaucracy. Furthermore, while such a web could perhaps be maintained if it has public support through democratic institutions, in the case of Middle Eastern societies, it has been maintained through the oppression of social, economic and political agency despite the political will of the people

In Turkey's case, after the collapse and breakup of the Ottoman Empire and the formation of the Republic in 1923, the state structure was built on a secular - laicism to be specific - and nationalist ideology, which ultimately led to the exclusion or oppression of religious social classes and other ethnic groups within the multi-ethnic population of modern Turkey. The state did not recognize a population with Sunni or Alevi values, ethnicities such as Kurds or Armenians or leftist-minded people. Such oppression brought with it the formation of Islamist groups, Kurdish nationalism and leftist groups. Although there were democratic attempts and efforts to minimize the disconnection between the people and the state, Turkey witnessed several Western-approved military coups in 1960, 1971, 1980 and 1997 that silenced these steps. As such, state oppression paved the way for the formation of violent and non-violent radical groups. While Islamists chose a non-violent path, Kurdish nationalism and some leftist factions followed the path to violent radicalism, which ultimately became a source of terror in Turkey. The elimination and blockage of political participation in addition to exclusionary state policies up until the early 2000s, in a way, turned a wound into an illness that has become difficult to heal.

Although the state has somewhat solved its oppression of non-violent Islamists, Kurdish nationalism, which found an iteration in the PKK, remains to be tackled. Moreover, despite state efforts to bring about political solutions to the issue, the PKK has now become a tool for regional actors to be used against Turkey for their imperial gains.

The situation is not much different in Egypt. While it became a British protectorate in 1915, after its independence in 1922 it became a monarchy under King Fuad I from the Muhammad Ali dynasty, which lasted until 1952. Despite the collapse of the monarchy and the establishment of the Arab Republic of Egypt in 1953, the subsequent presidents also chose to govern the country autocratically with an interdependence of powerful state institutions despite the national interest of the people. Meanwhile, the governing elite maintained its relationship with Western imperial states, as it was mutually beneficial. This lineage, though not the source, is a factor that made the Muslim Brotherhood as popular as it became, as it was an alternative voice for people who were against state elitism and human rights violations by the state. Moreover, the Tahrir Square revolution during the Arab Spring is a result of such dysfunctional governance that ignores popular demands and the people's democratic will. Here, the rise of radical groups, in this case the Muslim Brotherhood, can also be linked to limitations imposed on the political agency of a society's social classes. Its Western allies have also supported blocking the agency of civil society in Egypt. An example of this relationship is the ouster of Egypt's first democratically elected president, Mohammed Morsi, through a military coup lead by then general and current President Abdel-Fattah el-Sissi in 2013. Similar to the military coups in Turkey's history, the attempt in Egypt to establish a democratic society through democratic elections was not supported by Egypt's Western allies that claim to be promoters of democracy.

Similar scenarios of artificial state formation and autocratic regimes can also be seen in pre-U.S. invasion Iraq ruled by Saddam Hussain and pre-Arab Spring Libya under Muammar Gadhafi as well as contemporary Gulf monarchies. The symptoms of such oppressive autocratic regimes were exposed as radicalism within the borders of these countries.

Meanwhile, it is also important to emphasize that in the modern Middle East, particularly post-9/11, radicalism has been strategically maintained with an aim of sustaining terrorism as a form of governance, which is achieved through fueling clashes between radical groups or these groups against their states. The situations in two failed states, Iraq and Afghanistan, after 9/11 and the current situation in Syria are good examples of this. Democracy has yet to come to Iraq and stability to Afghanistan, a country that has been at war with its own radical groups or invaders for over three decades. The most recent example is the Bashar Assad regime in Syria and his oppression of the people, which has turned into a civil war that has claimed more than 300,000 lives in the past five years. His father Hafez Assad's Baathist regime, continued by his son Bashar, who are from the minority Alawite sect, built their legacy on oppressing the country's Kurds, Sunni Arabs, Turkmens and other minorities. Here lies the million-dollar question: Who benefits from the instability in the Middle East and the rise of such radical groups? The answer is definitely not the people in the Middle East.

Radicalism is not inherently embedded in Middle Eastern society, though it has witnessed many state or sectarian wars. In addition, while religious-based radicalism is a problem in the Middle East through the rise of certain Takfiri Salafist groups, historically and traditionally it has not been a movement that has received support from anywhere near the majority of Muslims in the Middle East, let alone globally.

Lastly, it is important to mention that radicalism and terrorism are not synonymous terms. However, radicalism, if not weakened, can lead to violence and ultimately terrorism. Radicalism can be weakened and ultimately eliminated only through achieving democratic institutions in Middle Eastern nation-states and by opening the arena to civil society, rather than oppressing them.