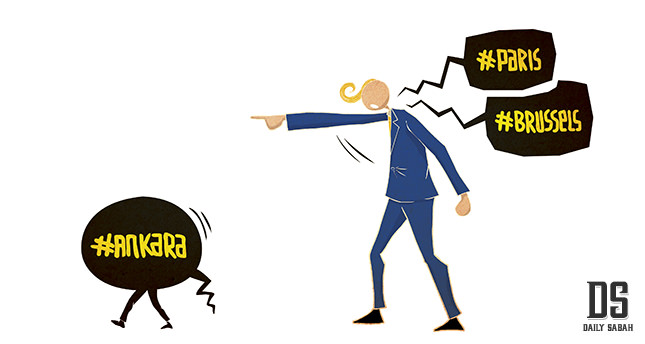 Both the Istanbul and Brussels attacks have shown the world that a whole new approach toward global jihad needs to be adopted. And it should be NATO leading it with Turkey playing a larger role

For many Turks, the bombing in Brussels may have been received with a chilling note of profanity as, unlike their own terrorist attacks days before, attacks in the Belgian capital almost appeared for a few fleeting moments like the work of the PKK. President Recep Tayyip Erdoğan had mentioned only days before that Europeans will feel the harsh hand of terrorism and its horror when terrorists plant their bombs on their own soil.

And this is very true, even though it is not believed that the PKK carried out such a bombing in Belgium, although few doubt in Turkey that anyone else could have had a hand in the Istanbul attacks.

But the lessons from both attacks are to be learned. DAESH may well have carried out their revenge attack in Brussels for the arrest of the bomber of the Bataclan in November of last year in Paris. But their speed to operate so swiftly is worrying, and once again we are reminded how ill-conceived both the French and British idea is that hosting terrorists in your country is at least a way of ensuring they do not carry out carnage on home soil.

Western governments need to heed other lessons as well. Terrorism in fact is not really linked to religion at all but almost entirely to a resistance to conform to an idea of liberty, law and order, and of course tolerance. Even religions such as Islam accommodate tolerance. And it had to happen in Belgium, which gives extremists the double whammy of pushing EU institutions to lean on member states to allow Brussels to take measures against terrorists in the name and for the sake of national foreign policies. It also reminds the world that NATO is impotent in the fight against DAESH, as the organization has its headquarters in the Belgian capital.

It should also be noted that Belgium has one of the highest concentrations of jihad recruits in the whole of the EU and many have argued that it was only a matter of time before the time bomb stopped ticking.

A number of gruesome terror incidents there recently have set the scene for the bombings this week. But terrorists are getting more sophisticated in their dirty work and a lack of cohesion between EU security services, and allowing DAESH to win the war on the Internet is beginning to incur a heavy cost. Europe is the new landscape for DAESH to deliver its deadly blows to the countries that are most vulnerable, as their war in the Middle East becomes more marginalized in places like Iraq.

Yet Europe needs to spend much more on security in line with the U.S. if it is to prevent more terror attacks on its own soil. It also needs to share more intelligence. It is inconceivable that the Belgian authorities did not know such an attack was about to be carried out or even by whom. It also needs to get closer to the Arab world and use those relationships to gain an understanding of who these jihadists are and what their driving forces are. Intelligence is always key. In recent years, spying using technology has made a huge difference in how organizations like Hezbollah keep tabs on those suspected of being an enemy agent, with a remarkably high level of success, and yet in the West there seems to be a half-cocked, almost somnolent approach to keeping tabs on the bad guys. In the U.K., for example, Amnesty International recently berated British Prime Minister David Cameron's government for infringing on the privacy of suspected terrorists in how it goes about phone tapping and surveillance of those who are capable of carrying out bombings like those in Brussels.

But surely the time is up for this clash of values that liberals have always argued impeded liberties for an unjustifiable means to an ends. When a group of sexually frustrated losers who cannot make the grade in European society - as that is the trend of most European jihadists who join DAESH are - blow people to bits outside EU institutions and at an airport, something tells you something is not working. And don't the Americans know it. Barely an hour after the incident, the U.S. began a crackdown, expecting more attacks to be carried out there if terrorists saw the opportunity.

So far in Europe, although the number of incidents and the caliber of their heinousness can be linked to two countries that both have a large population of immigrants from the Arab world - France and Belgium - where huge swathes of the Muslim community have been allowed to becomes ostracized and in some cases ghettos allowed to form as a quick fix solution to social problems caused by poor integration. If Europe is to put a halt to such attacks it needs to have a totally bold, new way of approaching the subject of extremism, as the gaping holes in its infrastructure only serve one agenda for those willing to take advantage of them. EU leaders should be worried about what happened on Tuesday. But they should be even more worried that DAESH told them there would be more to come.

* The Deutsche Welle correspondent in Beirut while also writing for both the Daily Mail and Daily Express U.K. tabloids @MartinRJay
Last Update: Mar 25, 2016 1:49 am
RELATED TOPICS