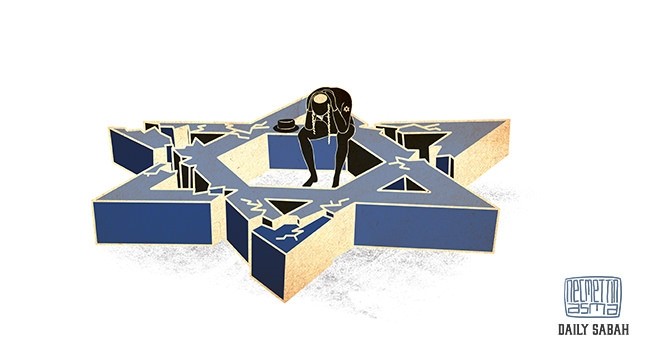 Nowadays, Israel must be living its happiest moments in history as it undoubtedly has the 'best leader', who spices up its policies with his endless discriminative statements

It is hard to pinpoint exactly when Israel definitively transformed from the only democracy in the Middle East and a light unto nations into just another fully fledged ethno-theocratic autocracy. A recent story about a plague of stray alley cats in Jerusalem and the agricultural minister's leaked response is perhaps a gentle and somewhat humorous way of leading into a discussion cataloging the extent to which Israel has degenerated into another crackpot Middle Eastern country. Agriculture Minister Uri Ariel, a member of the religious settler party, Jewish Home, is evidently concerned that neutering the cats would defy God's commandment to "go forth and multiply" after decamping from Noah's Ark following the flood. His solution to this Biblical conundrum? To deport - or as journalist Amir Ben-David mockingly reported "transfurr" - either all of the male cats or all of the female cats to another country willing to take them - kitty political football if you will.

I admit that upon first spying this article I thought it was a joke - a clever analogy poking macabre fun at a nation that has often resorted to deportations and population transfers to deal with troublesome elements, e.g. Palestinians or African refugees recently transferred to authoritarian states in Africa in exchange for arms. Nevertheless, Ariel did apparently suggest a second solution: "We use the money [for spaying] to research ways to prevent stray animals from reproducing, for example a spray or powder that would stop the males from smelling the females." It boggles the mind that these are the ruminations of a senior elected parliamentary official.

Deportation and ethnic cleansing, however, are not joking matters, yet these underpin the Israeli state. As such, it is remarkable that it has taken so long for the luster of the official Israeli narrative, i.e. a civilized democracy in the Middle East, to lose some of its shine in the court of Western popular opinion. From its very inception, the Zionist project sought to transfer Palestinian Arabs off the land earmarked for the future Jewish homeland. Over 750,000 Palestinians fled or were expelled from their homes in what is now recognized as modern-day Israel. Hundreds of Palestinian villages were destroyed and their names were wiped off the map. Similar events occurred in 1967. To this day, Israel continues to appropriate Palestinian land in the West Bank. Additionally, Israel continues to attempt to strip Palestinian residents of Jerusalem, and, to a lesser, extent in the Occupied Palestinian Territories, of their residency status if they remain abroad for too long. Lest we think that this is an anachronistic position, a recent poll in March 2016 found that nearly 50 percent of Israeli Jews believe that Arabs should be ethnically cleansed from Israel.

Israeli policy has historically been cruel, but nevertheless, for the most part it has been calculated in its cruelty. Israel's previously slick public relations machine has often managed to explain away concerns regarding its divide and rule policies, use of blackmail, arbitrary detention, settlement policies and outright military ruthlessness in the court of Western public opinion. Even official reports revealing that Israel literally counts the calories allowed to enter the Gaza Strip - 2,279 per person per day - with the intention that the siege is "like meeting a dietitian. We need to make the Palestinians lose weight, but not starve to death," has not led to the lifting of the siege. In 2009 U.S. Secretary of State John Kerry, among others, was perplexed to discover that Israel had blocked the import of pasta into Gaza.

In recent times, however, it seems increasingly clear that the Israeli government under Prime Minister Benjamin Netanyahu no longer cares about Israel's public image as a democracy. Repeated public faux pas, Israel's periodic exercises in "mowing the lawn" in Gaza, i.e., deliberately engaging in the disproportionate use of force, crackdowns on internal leftist dissent and the increasing power of the religious right - not to mention the ongoing occupation and settlement of the West Bank - have finally taken their toll on Israel's image as a secular, rational, and civilized member of the democratic West. By 2003, a European Union poll found that respondents considered Israel the greatest threat to world peace.

Israeli society is riven with ethno-religious prejudice. Even if we concede that Israel possesses democratic elements, this amounts to what Pierre Van Den Berge described as a "Herrenvolk," or "master-race" democracy. While it is true that Palestinians with Israeli citizenship possess the right to vote and have recourse to the courts, they are still systematically discriminated against.

This is not even to mention the millions of Palestinians living under occupation who do not have the right to vote in Israel and are subject to military rather than civil law. Thus, the idea of Israel as a democracy, especially after 1967, does not stand up to even the most elementary level of scrutiny. Israeli President Reuven Rivlin, a former right-wing Likud deputy no less, declared that "Israel is a sick society with an illness that demands treatment" to save it from its racist tendencies.

Nevertheless, the Israeli government and large elements of society are intent on reinforcing ethno-religious divisions within Israel and the occupied territories. Israeli-only roads in the West Bank, the security/apartheid wall, and Jewish-only settlements are just a few examples of physical barriers intended to divide the two communities.

Netanyahu's last minute rabble-rousing during the March 2015 elections, proclaiming that Israeli Palestinians, allegedly backed by foreign powers, would vote "in droves" and that there would be no Palestinian state under his watch, is emblematic of Jewish Israeli societal norms.

Another example of ethno-religiously driven policy is the Education Ministry's recent decision to ban the book "Borderlife" by Dorit Rabinyan from senior elective high-school literature courses because it narrates a love affair between a Palestinian Arab and an Israeli Jew. Evidently, the ministry was worried about the promotion of miscegenation, i.e. interbreeding with non-Jews. Let's hope that the ministry does not impute ethno-racial characteristics on "Romeo and Juliet," otherwise Shakespeare might be heading for the axe too.

Indicatively, it is impossible to marry outside of the religious strictures laid down by the Chief Rabbinate of Israel, an institution that exercises far too much power for a notionally secular democratic society. In practical terms, this means that Jews cannot marry non-Jews. As a result, many Israelis are forced to travel abroad to marry. Likewise, the rabbinate has argued that Jewish women should not consort with gentiles or Arabs. Israeli rabbis have even ruled that Jews should not even rent or sell homes to gentiles, period.

HOW ISRAEL LOST THE WEST

In my view, the straw that broke the camel's back regarding Western popular opinion vis-a-vis Israel was the 2008-09 attack on the Gaza Strip during which some 1,400 (mostly civilian) Palestinians and 10 (mostly combatant) Israelis were killed. Prior to the graphic images of destruction in 2008-09, it was perhaps too easy to conflate Palestinian suicide attacks with those of Sept. 11, 2001.

Moreover, the Israeli government's decision to ban the international media from covering the conflict backfired as, with the advent of the Internet and media technology provided by smart phones, Palestinians were afforded the opportunity to render the brutality of Israeli policies directly to Western audiences. Israel's 2010 assault on the Freedom Flotilla that aimed at breaking the siege of Gaza, and which resulted in the death of nine Turkish peace activists, engendered a similar public relations debacle. In polls taken after the assault only around 20 percent of respondents in France, Germany and Sweden recorded a favorable opinion of Israel.

The process repeated itself on a larger scale in July and August 2014.

THE POWER OF THE ABSURD

Israeli leaders also continue to shoot themselves in the foot by making public statements that can be so blatantly contradicted by the facts. In a clumsy attempt to take advantage of DAESH-induced hysteria worldwide, Netanyahu disingenuously claimed that "Hamas is ISIS [DAESH] and ISIS is Hamas," thereby earning himself a quick rebuttal from that bastion of progress and nuance, the U.S. State Department. Similarly, comments from Netanyahu, which seemed to pin the blame for the Holocaust on Palestinians and the controversial Grand Mufi of Jersualem Hajj Amin al-Husseini, in particular, as he was once photographed with Hitler, beggared belief in terms of Netanyahu's chutzpah concerning historical revisionism. His comments were so egregious that they provoked an extremely unusual rebuke from German Chancellor Angela Merkel and a bizarre situation in which the German government unequivocally claimed responsibility for the Holocaust. Another diplomatic faux pas occurred when Netanyahu branded the mild-mannered U.N. secretary-general, Ban Ki-moon, a supporter of terrorism. Netanyahu's attempts to insult and undermine U.S. President Barak Obama must also have many Americans wondering about the value of Israel's friendship.

Regarding another of Netanyahu's Hitleresque imaginations, Israel continues to find itself on the wrong side of history following the reintegration of Iran back into the international fold. Netanyahu's obsession with Iran is bizarre - he has been claiming that the Islamic republic has been on the verge of producing nuclear weapons since 1996. This is despite the fact that in 2012 Israel's own foreign intelligence service, Mossad, and the CIA, concluded that Iran was not trying to produce a nuclear weapon. Given the nuclear agreement between Iran and the P5+1 in 2015, and then its successful implementation in early 2016, his 2012 appearance at the U.N. wielding a cartoon bomb while castigating rapprochement with Iran, looks even more childish and politically immature.

Despite the resolution of the Iranian nuclear crisis, the Israeli government nevertheless clings to this anti-Iran mantra. Israeli Defense Minister Moshe Yaalon recently said: "In Syria, if the choice is between Iran and the Islamic State [DAESH], I choose the Islamic State." Similarly, Netanyahu clings to his fearmongering delusions stating: "If anybody wants to use Syrian territory to transfer nuclear weapons to Hezbollah, we'll take action." Where exactly said weapons may come from remains a mystery.

All of the above begs the question though of what world Netanyahu and his cronies live in. Does the Israeli public understand what damage these schmucks are doing to Israel's image abroad? Given the actions and the ludicrous pronouncements of its leaders, it is altogether unsurprising that Israel has progressively found itself on the wrong side of Western popular opinion. Not only is Israel's brutality categorically undeniable, increasingly almost nobody with any sense of sensibility takes its government seriously anymore.

* Dr Tristan Dunning is an honorary research fellow at the School of Historical and Philosophical Inquiry at the University of Queensland in Australia and publisher of Hamas, Jihad and Popular Legitimacy: Reinterpreting Resistance in Palestine​
Last Update: Jun 14, 2016 1:20 pm
RELATED TOPICS