Will the US manage to regain Turkey? 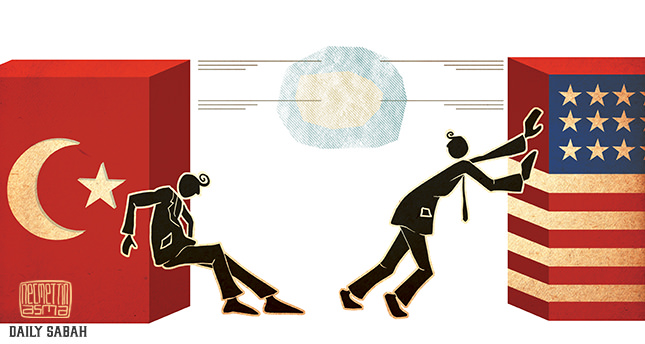 The U.S., which is experiencing an administration problem as the November election approaches, fails about its view on Turkey like it has been on its every other foreign policy these days

President Recep Tayyip Erdoğan arrived in the United States to attend the Nuclear Security Summit that began on March 29. He was among a few speakers to address representatives of all the participating countries at the summit. The agenda was quite busy. The summit was titled "Nuclear Security," but Turkey's focus will not remain limited solely to this context. It is apparent that the world and the Middle East is about to be engulfed by fire, something that must concern the U.S.

Before Erdoğan's trip, there were efforts in Turkey to play down the visit. As part of a concerted campaign, so-called news reports appeared that said President Barack Obama had rejected Erdoğan's request for a meeting and decided not to meet him and that Erdoğan "wheedled an invitation" from the Brookings Institute.

Can Dündar, who is on trial for espionage and treason, writes for the Cumhuriyet daily, which has devoted full pages for several days on a series of fabricated news reports intended to prove how discredited Erdoğan has become in the world in general and in the U.S. in particular.

Most of these allegations, based on fabricated reports, were denied, as was done by the Brookings Institute with a statement. But this strong trend has meaning in a particular context. Actually, it was part of a campaign that began when Erdoğan told then Israeli President Shimon Peres, "One minute," in 2009 in Davos and criticized Israel for killing civilians, which assumed a wider dimension during the Gezi crisis and which continued with the attempted judicial coup of Dec. 17-25 in 2013, that was orchestrated by followers of Fethullah Gülen through the collaboration of infiltrators in the state bureaucracy.

With the DAESH attack on the northern Syrian town of Kobani, heavy propaganda began to revolve around the claim "Turkey supports DAESH." That claim was used as a battering ram by the PKK and its political arm, the Peoples' Democratic Party (HDP), the Gülenist Terror Organization (FETÖ) and secularist elites. The purpose was to end the reconciliation process, to alienate devout Kurds from the Justice and Development Party (AK Party) through ethnic nationalism stoked by concerns over Kobani, to incite Kurds to rebel through the efforts of the Gülenist organization, the PKK, the HDP, secularist elites and their media, to bring the Syrian civil war into Turkey's southeast to accomplish many things at once.

What were these things? First, Erdoğan would be toppled. It would be done either through street protests or by rendering the country ungovernable and paving the way for a military coup or through triggering a severe economic crisis.

Thus, secularist "white Turks" would manage to do what they failed to do through elections and come to power. So, the PKK and the HDP would either achieve autonomy or expand a PKK-ruled North Korea from Rojava (northern Syria) to Diyarbakır. Gülenists would regain dominant posts in the state bureaucracy and launch a massive purge. Media operations against and character assassinations of Erdoğan have aimed to bring down his popularity with the masses.

In short, Erdoğan has been targeted via such an operation from early 2013 onward. This is not his personal matter. Turkey has performed quite brilliantly for the last 14 years. Thanks to this performance and the disintegration of a unipolar or bipolar world order, Turkey has begun to chart a more independent course in many areas and eliminate tutelage structures within the state. For instance, on one hand it complied with U.N.-imposed sanctions against Iran, while on the other, with its emphasis on independent decision-making, it disregarded America's self-proclaimed prohibitions. Halk Bankası was at the center of the judicial coup attempt launched by Gülenist prosecutors and judges on Dec. 17 and Dec. 25, 2013, by throwing five unrelated files into the same bag. Halk Bankası has played a pivotal role in Iraqi Kurdistan Regional Government's oil exports and Iran's oil and natural gas exports.

Supported by secularist elites, Gülenists, the PKK and the HDP, the main opposition Republican People's Party (CHP) and its media, that a succession of coups spanned three important elections. At this point, Erdoğan and the AK Party have won four elections, including one repeat election. While Erdoğan got 52 percent of the vote and became the first popularly elected president, the AK Party won 50 percent of the vote in the last elections. According to the latest polls, the president's popular support rose to 55 percent and that of the AK Party climbed to 53 percent.

In sum, the anti-democratic coups that began in early 2013 were repelled one by one. Gülen has suffered a decisive defeat. Currently, he is a discredited leader of a terrorist organization. The PKK has also received a thrashing. Its political arm, the HDP, has seen its popular support fall below the national election threshold, due to its aiding and abetting terrorism.

In truth, Turkey did not see its U.S. and European allies stand beside it while suffering such anti-democratic attacks on its liberal democratic political system and while facing the most severe consequences of the Syrian civil war. Unfortunately, the U.S. and our European partners exhibited conduct unbecoming alliance partners, while Turkey hosted 3 million refugees and stood up to simultaneous attacks from DAESH, the PKK, the People's Protection Units (YPJ), the Revolutionary People's Liberation Party-Front (DHKP-C) and the Gülenist organization.

Undoubtedly, Turkey has noted all this down. Turkey has protected its democratic system, on its own, against coups, pro-coup circles, suicide bombers and terrorist organizations and left this process behind.

But that alliance at home continues perception operations willfully, though it is aware that it has already been defeated. They have already been exposed to the public for what they are, and I don't think they expect to achieve anything.

Erdoğan did not have the above-mentioned issues in mind when he departed for the U.S. Erdoğan's planned meetings in the U.S. had an independent agenda. Obama is a retired president by now. However, Erdoğan is an accomplished politician who is fresh from an electoral victory and is poised to win the next elections in 2019.

A wide variety of topics were on the table: measures to be taken against multiple terror attacks, the growing humanitarian crisis sparked by the civil war in Syria, Assad's genocide, the massive migration crisis, attracting currently inadequate U.S investments in Turkey as an emerging market, including Turkey in the Transatlantic Trade and Investment Partnership, trade agreements with the U.S., submission of a file containing details about U.S.-made M16 rifles and German Milan anti-tank missiles seized from PKK militants (with serial numbers) and of course, questions about how Gülen, who is the leader of a terrorist organization, can still reside in the U.S.

All of these topics are important. But Turkey is particularly sensitive about the Gülenist Terror Organization. One wonders how Gülen, the leader of the Gülenist Terror Organization (FETÖ), against whom six criminal prosecutions were brought in the U.S. for various charges like "human smuggling, tax fraud and money laundering," but who hasn't been put on trial yet, launders money through charters schools that are funded by American taxpayers. Indeed, a critical documentary film, "Killing Ed," concerning Gülenist charter schools in the U.S. opened at the Cinema Village in New York on March 28 and ran for four days. Released in early March with Spanish, Korean and Vietnamese translation, the documentary offers a sharp criticism of how FETÖ, which is funded by public tax dollars in the U.S., pursues its own political agenda. Exposing corruption under the pretext of education, the film reveals that the reason why U.S. authorities ignore FETÖ's activities is hundreds of sponsored trips to Turkey and donations to politicians from dubious sources.

Anna Clark, who wrote a piece about the documentary for Huffington Post, says that Gülen-linked schools sponsor different events for lobbying purposes. The most striking claim is this: "Perhaps the reason why so few seem interested in reporting on these schools is that the Gülen Movement has sponsored hundreds of trips to Turkey for politicians and journalists."

Sharon Higgins, co-founder of the non-profit organization Parents Across America and an expert on the Gülen charter schools, said, "Thousands of people have been on these propaganda trips to Turkey."

Speaking to the Fox news channel, former Pentagon spokesman and retired U.S. navy commander Jeffrey D. Gordon said: "Turkey issued an arrest warrant for Gülen after he tried to topple the government and replace it with a theocracy like in Iran. America should deport him. We don't need him here." At last, reactions mount against Gülen discernibly in the U.S. Former NATO Supreme Allied Commander Gen. Wesley Clark said, "The fact that Gülen is in the United States, running a network of charter schools subsidized by the United States, is very strange."

Professor Abraham Wagner from Columbia University lambasted Gülen in an article he wrote for Huffington Post, arguing, "Perhaps the most sinister among Turkey's security threats is the infiltration of radical Islamic cleric Fethullah Gülen's movement into the fabric of Turkey's government and society in an attempt to usurp the democratically elected government." For Turkey, Gülen continuing to live in Pennsylvania as if nothing had happened means what it would have meant to the U.S. if DAESH leader Abu Baker al-Baghdadi or al-Qaida Osama leader Bin Laden had lived in a mansion in Ankara. This cannot be explained under any circumstances, let alone in an alliance relationship.

Contrary to expectations, U.S.-Turkish relations have deteriorated during Obama's presidency and the sense of trust has greatly eroded. The fact that Obama is the worst-ever foreign policy president in U.S. history means nothing to Turkey. The expectation is that these two big, strong nations will quickly mend bilateral relations and create conditions for collaboration.