Portraying a terrorist as a hero: What's wrong with the western media's depiction of the PKK 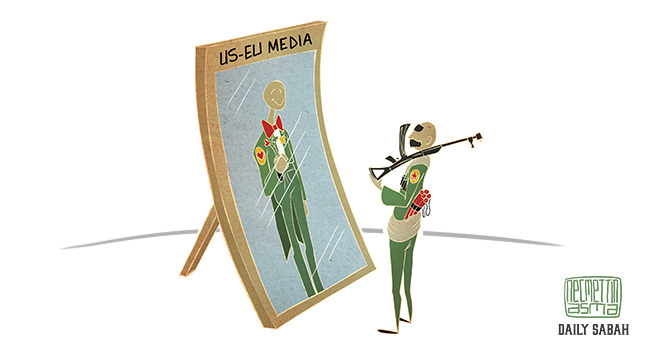 After the devastating PKK and DAESH terrorist attacks in Turkey, several questions emerged regarding the ambivalent discourse on nationalist and social revolutionary terrorist movements like the PKK as compared to religious terrorist movements like DAESH and al-Qaida. DAESH ordered the suicide bombings that killed 102 people in Ankara on Oct. 10, 2015 while 28 people were killed in a car bomb ordered by the PKK-affiliated Kurdistan Freedom Falcons (TAK) on Feb. 17, 2016. The TAK killed 35 people and injured 125 more in a car bombing on March 13, 2016 and five people were killed in a DAESH suicide attack on Taksim's İstiklal Avenue in Istanbul on March 10, 2016. Obviously, DAESH and the PKK have used similar terrorist tactics in their attacks here in Turkey. That is normal, right? This is what terrorists do. They use suicide bombers or they detonate car bombs - they speak the same language. The problem here is how this language gets translated into English, German, French or Dutch.

In Western media, the so-called war on terror is riddled with several stories of the PKK, a left-wing terrorist organization listed by several states and organizations, including NATO and European Union. Many of these outlets have already covered PKK militants, especially the female ones, as "a painted beauty, a brave, secular Kurdish female fighter in the Middle East." If you quickly google it, you can see them singing a nice Kurdish song, chatting among one another and hugging each other like the girls on the hit show "Sex and The City," curling their hair, adorning it with daisies, reading books, taking notes, working on a laptop and watching TV. At first glance, one might think that these photos and videos depict normal people in an Anatolian village instead of coming from a terrorist camp and that these women have left their homes and loved ones to voluntarily join a terrorist group. A group that encourages people to blow themselves up on busy city streets like İstiklal Avenue in Istanbul, a group that views this violent act as honorable and courageous. One thing is stressed in the news about female PKK fighters: They are the ones there to fight against social, cultural and religious injustices. Well, like Malala Yousafzai, you mean? But if this is the case, then are not these young PKK fighters overreacting a bit by blowing themselves up and killing civilians in the process? Plus, if you ask foreign terrorist fighters from Europe who have joined DAESH what motivated them to join such a group, most of them claim that they, too, are fighting against injustice and against oppression in their European countries. But as far as I see it Western outlets are not making documentaries presenting these DAESH foreign fighters as cute, nice boys that enjoy playing PlayStation in their camps.

Is it because they are fighting against whom the West wants them to fight against? Or is it perhaps because they are useful allies for the West in the field? Or, and this is probably the most likely, is it because their existence is not a direct security threat to the West and their secular appearance appeals to the West? It seems like it does not matter that they are blowing themselves up and killing civilians in the center of Istanbul or Ankara as long as they do not attempt to do so in London, Brussels, Paris or Washington. But the question then becomes who will guarantee that they will not do this in European cities in the future? And is it an ethical stance against terrorism and radicalization?

Although suicide bombing has been presented as a method specific to DAESH these last couple of years, when we look at the PKK's history we see that it too has had extensive experience with this tactic. The very first suicide blast in Turkey happened 20 years ago on June 30, 1996. A PKK female suicide bomber, Zeynep Kınacı, also known as Zilan, pretended to be a pregnant woman before she murdered nine soldiers in a blast. Later on, a group of "secular guerrilla Kurdish" women, as some Western media described them, continued to blow themselves up. Leyla Kaplan, Güler Otaç, Fatma Özen, Hüsniye Oruç and Maral Maymak are only a few of them. Since then, 25 attacks have been carried out and 334 people have died as a result. Fourteen of those attacks were executed by the PKK, four of them by the Revolutionary People's Liberation Party-front (DHKP-C), two by al-Qaida and one by TAK, a sub branch of the PKK. So out of these attacks, only two were motivated by religious sentiment while the rest were driven by political, nationalist or leftist motivations.

THE WEST'S WAR AGAINST JOURNALISM

The main problem with the majority of the Western media is that its coverage tends to equate the PKK with Kurdish society. The current war between the PKK and the Turkish state is often reflected in newspapers and on TV as "Turkey`s war against the Kurds" or "Turkey bombs the Syrian Kurds." In the case of Islamic religious terrorist movements, there are no Western media outlets that use titles like the West`s war against Muslims or the West bombed Syrian, Iraqi or Afghan Muslims.

Our moral duty should be to keep a distance from any kind of radical movement that uses violence, and we should not try to justify any of them. Roger Garaudy's fascinating book on fundamentalism refers to "Integrismes" (extraits), which criticizes all kinds of fundamentalists like Eurocentric positivists, archaic scientific minds, Stalinist leftists, nationalists and religious fundamentalists in Christianity, Judaism and Islam. For the sake of coexistence and dialogue, we should have an ethical stance against any kind of fundamentalist movement. These should not be limited to religious ones, but should also include nationalist and social revolutionary movements. We should not discriminate between various instances of violence or terror based on which group orchestrated the attacks and which group was affected by the attacks.

What the West needs to keep in mind is that there should be an ethical stance against any kind of terrorism and violence and it should help de-radicalize certain people or certain groups of people. Otherwise we will continue to have instances like the attack on the U.S. Consulate in Istanbul on Aug. 10, 2015, which was carried out by Hatice Aşkın, who was a member of the DHKP-C. Today, the DHKP-C may send its young members to YPG camps across the border into Syria to fight and get trained. But what about tomorrow? When the war in Syria ends, these terrorists will find a new place to go, and it is far from impossible for them to turn their barrels on the West.