If only it was about freedom, pluralism and democracy 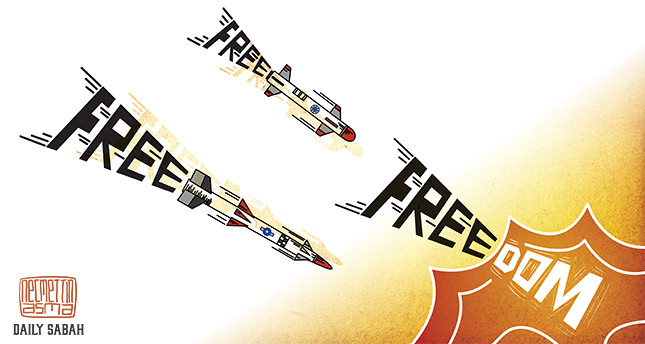 What Malcolm X, Martin Luther King Jr. and Gandhi advocated for decades ago and Erdoğan is insisting on today is the same thing: We may be different but we exist. We may not be secular, Western or modern but we have the same rights

Like many notions, we have come to notice that freedom, pluralism and democracy can be totally ignored when they do not serve a political or financial end. In other words, when these terms are just about what they originally meant they appear to have no significance unless there is some sort of gain behind them. Similarly, we have come to notice that these fundamental notions and many more have been and are being used to stir up developing countries as and when certain power circles deem it appropriate or to fit their interests. Therefore, claiming that these notions are mostly violated by those who appear to voice or promote them the most would not be an exaggeration. Yet regardless of the number of their own violations or non-compliance, circles or countries that hold power consider themselves to be the preachers of freedoms or those who set benchmarks when it comes to fundamental rights and notions.

MORSI WAS NOT THE FIRST VICTIM

To witness their non-commitments to fundamental rights, there is no need to go too far back in history. In 2013, the world witnessed a bloody coup in Egypt and circles that advertise that they care the most about freedoms buttressed the ouster of Egypt's first democratically elected president, Mohammed Morsi, due to him allegedly not being inclusive enough. The brutal handling of civilians protesting Morsi's ouster appeared to be totally unproblematic in the eyes of the preachers of democracy, freedom and pluralism. Morsi and thousands of his supporters remain behind bars while the world remains totally blind, mute and deaf to their rights and dignity. What makes some deeply controversial journalists in Turkey more important than Morsi for some European diplomats and consuls general to go all the way to Turkish courts to show their support, even when they are tried for cases of espionage? Has any consul general or European representative been to Egyptian courts to show support for Morsi? If Islam is not the core differing reason for this selective approach of support, then why are there so obvious double standards and selectiveness of support? If it is to do with the fact that Morsi is Muslim while some journalists in Turkey are secularists and Western, how compatible is this with the notion of pluralism, freedom and democracy? Can fundamental notions get any blanker when preachers of democracy, freedom and pluralism do not budge a tiny bit for Morsi, who got 52 percent of the vote in the first democratic elections in Egypt, but will show strong support and solidarity for a few controversial journalists in Turkey? Again, how can one convince the masses about the sincerity of these notions when lobbying for a few controversial journalists comes before everything else and is one of the constant critiques of Turkey while completely ignoring the reasons that led to their imprisonment or trials? Why is there not the same level of awareness or support for some journalists behind bars in Egypt? Is it not shameful that the most voiced issue is the fate of a few journalists when humanity is destroyed every day in Syria and many other parts of Africa and the Middle East? Refugees are facing inhuman conditions in various camps across Europe and Turkey is facing daily arrivals of new Syrians fleeing violence. Is the dignity of a few controversial journalists more important than the masses of vulnerable men, women, children and elderly who are fleeing war? Why is it not them who are the subject of debates and press releases rather than other certain individuals? Why do they not get the same level of coverage and attention?

How about Martin Luther King Jr., Malcolm X, Mahatma Gandhi and many others who tirelessly advocated for the rights of their fellow men and women and the cruel end they faced. All they did was stand against injustices, pain and inhumane levels of discrimination that were inflicted on them by preachers of freedoms, pluralism and democracy. The ill disposition toward President Recep Tayyip Erdoğan due to him simply saying that the "world is bigger than five" is not any different to the ill disposition that was adopted toward King, Malcolm X or Gandhi. By challenging the unfair structure of the U.N. Security Council (UNSC), what Erdoğan is asking for cannot be more pluralistic or democratic, but even his motto has solely revealed that it is not about pluralism, democracy or freedoms. Had there been a sincere commitment to these rights, Erdoğan's motto would have been embraced by all and there would have been immediate efforts to change the UNSC and other organizations' longstanding undemocratic structures rather than this and Erdoğan's many other brave actions causing the aforementioned circles to try to corner him and his country in all the lowest possible ways.

Again, looking at the notion of pluralism or humanism from the context of refugees and Europe's recent handling of the situation shows how these notions are completely blank. Some of the treatment that refugees have been facing in Europe is inhumane, if not cruel. The efforts and negotiations that EU countries made with Turkey to reach a deal to block the flow of refugees were so intense that one could not stop to think that should these efforts have been made to get rid of the cruel regime in Syria, it could have been achieved. On the other hand, how ethical is it for the EU to make vulnerable refugees part of Turkey's EU accession negotiations or visa exemption?

Many more examples could be given to show how all these fundamental values have no real significance when it is about the lives of ordinary people. Instead, these notions are exploited to support the growth of what certain circles see as fundamental to their political and economic interest while abusing these same values to suppress the existence of certain notions or movements that are a threat to their political or economic interests.

However, should fundamental rights such as freedom, pluralism or democracy be so changeable and flexibly identifiable depending on who holds power and when interests matter? Is it not insulting for such fundamental notions to be the subject of exploitation or selectiveness by circles that appear to advocate for them most? Is it not simply unethical to claim these values only for circles that are considered secular, Western and modern? Such an attitude is the most despotic attitude to take as it does not tolerate the existence of differences. And this is the whole issue. What Malcolm X, King and Gandhi advocated for decades ago and Erdoğan is insisting on today is the same thing: We may be different but we exist. We may not be secular, Western or modern but we have the same rights. We may not be powerful or wealthy but we have the same claims and we will continue to claim all of them until we get them and every single denial will be imprinted in history.