The EU should not be asking 'is Turkey ready for membership?' but 'is the EU ready for Turkey?' 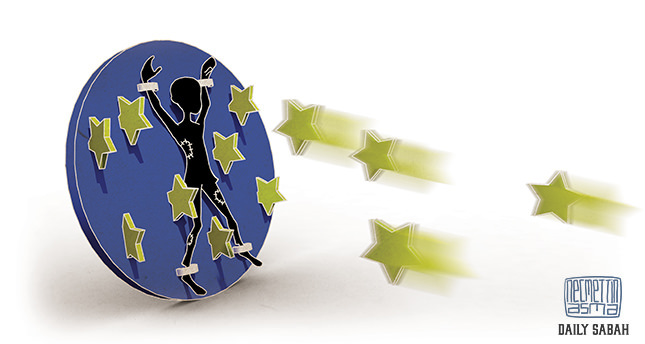 As the EU wobbles once again as it scuttles toward a U.K. referendum, it has a master plan to reinvent itself. But what is the dark secret the EU holds against Turkey?

Robert H Jackson, a United States solicitor general, once wrote in 1951: "Men are often bribed more by their loyalties and ambitions than money,". Today he might be speaking of the European Union and its abysmal obsession with protecting its own and surviving in what is looking like its greatest crisis ever.

With a U.K. referendum approaching, where Britons will decide whether they want to stay part of a project that at best is a failed experiment and at worse a scandalous waste of public money to keep a small coterie of around 40,000 individuals in sensationally overpaid jobs, many in Turkey might be asking "should we even be part of the EU?"

With Turkey playing an ever increasingly important role in the greatest immigration crisis in the history of the EU, it might also ask itself does it want to be part of a club that is so clearly heading towards self-destruction and might it not be wise to begin protecting itself against collateral damage - once the lunatics really start to take over the asylum.

The madness of the EU's own reaction to its own crisis ever is breathtaking. With the lowest ever credibility - just days after a lack of confidence referendum in the Netherlands - and the power mad technocrats have the answer already primed: "give us more power." This is how the EU works.

All problems can be resolved by wringing more power out of member states. Don't get the answer you want at a referendum? Do another one! (Ireland). Euro fails cataclysmically in five member states? Give them bailouts! European Commissioner implicated in Panama papers? Protect him with access to unlimited legal funds to sue any newspaper which dares write about it.

It goes on and on.

MEDIA IS EVERYTHING BUT MEDIA

But the press releases and the bribed-for media spots that EU commissioners enjoy with the Stockholm syndrome wordsmiths in Brussels - who some may call "journalists" - is sure to make a Hollywood script one day with Daniel Day Lewis playing the EU president who is inspired by the Brussels attacks as he sees it as a God send from above. Yes, believe it or not, the mindset in Brussels is that terrorists blowing up innocent, nice, white, Christian people - some of whom live in white-washed houses and whose children have perfect smiles - is the very thing EU folk have been praying for, for years.

At last, a real subject that generates press attention that we don't have to pay cash for to get onto European television where we have a justifiable "cross border" purpose to get involved and try and prevent the same thing repeating itself, many will be thinking in Disneyworld. Barely days after the glass was swept up and the bodies were buried and European TV channels had still immersed themselves in 24 hour coverage - whereas twice the number of dead were bombed in Lahore but that was only given a few minutes coverage, but they were Muslims so it doesn't really matter much - and the EU has a new purpose: homegrown terrorism.

Just in the last two weeks, the EU media machine has been pumping out truckloads of sanctimonious, self-fulfilling moral tutelage on what's wrong with the present security set up and how only the EU can fix it. New directives, regulations, task forces have been proposed by European deputies and EU commissioners who can barely believe their luck. Finally, the EU has a real role now. Yes! And we deserve it. We waited for it. And now it's our time.

But can you blame these appalling people for filling their bellies as they scramble over the charred corpses of those slain, rushing towards an "EU accredited journalist" ready to help in the crisis - that's the crisis of the EU collapsing, not the crisis that DAESH is blowing up Europeans. Try and keep up. Just look at how years and years of blowing billions of euros of EU taxpayers' money on talk shops, a fake parliament created with the sole purpose of legitimizing the real power in Brussels - the European Commission - and a bribed-n-primed media circus ready and on call to spread the good word to gullible Europeans. Just consider the 150-odd NGOs that are on the payroll too to disseminate a positive spin about the EU and you start to understand how the EU works, how desperate it is, how the slow ratchet-click revolution of increased power never stops like a Swiss watch. And how Brussels will do absolutely anything to keep its status and the jobs. It's really about the jobs, the glamor and the long afternoons in the European parliament where all there really is to do for Europe's rejected politicians is to flirt with girls. Or more.

Just recently the U.K. press thought they had a scoop when they stumbled on a number of media programs to promote the U.K. staying in the EU - were paid for from the EU budget, which London obviously pays into.

A EUROPEAN MIRAGE IN THE DESERT OF LIES

Do editors of British newspapers not know of the hundreds of millions of euros of taxpayers money used to promote the EU through paying state broadcasters' production and post-production fees in Brussels? How those same journalists are given unlimited resources to "report" on the EU as - and here it gets interesting so sit up and listen - without the bung, those media giants wouldn't bother having correspondents in Brussels in the first place as the EU is not considered an interesting subject.

Think about that for a minute. The EU has to bribe media across the entire 28-nation bloc to actually report on the EU otherwise it would get no coverage whatsoever. And how do high profile eurocrats feel about that? Are they embarrassed? Quite the contrary. They fool themselves, like a man who has to pay for sex but feels as though his partner is actually his girlfriend, but due to unique circumstances has to acclimatize herself to an unfortunate situation. The delusion is amazing.

But am I being too cynical to think that the refugee crisis, bought about entirely by the EU's inability to act - both through lacking political dynamism and outright power bequeathed by member states - is directly responsible for the Paris and Brussels bombing? An impotent EU, which is only able to send an unattractive Italian woman to take the "foreign policy" podium of countries which most Europeans couldn't name the capital of - could do nothing about the Arab Spring; nothing about Mr Assad in Syria, nothing about the Gulf countries funding extremist groups, even DAESH; and nothing about increasing swathes of refugees arriving - except create the most poorly conceived "one for one" plan with those stuck in Turkey. For that matter it can not even police the EU's eastern borders without calling for an EU army - a comical notion given that the EU cannot even conceptualize a single energy market, but it is amply qualified to go to the corners of the world and blow people's heads off with assault rifles probably made in the U.S. with protective clothing supplied by the Russians, all controlled by eurocrats in Brussels in a shiny new building, with really lovely shiny glass, which no doubt has Moroccan security guards who you really don't want to know what is in their temporary internet files in Explorer.

But it's not a joke. The Brussels attacks have given you a glimpse of what many have been planning for a very long time. A European federal super-state will be a hell on earth and the largest experiment in modern history. Think of a nightmare scenario where Romanian soldiers with an Italian commander, working on British radio equipment (which didn't work in the Gulf war) are sent to a country in West Africa where NATO are also rushing their soldiers to. But both superpowers have a different foreign policy and support both the incumbent power and rebels.

Fantasy? Not really. There is a worrying group of EU wasters and Euroean deputies who believe in an EU army.

They believe in it.

But where would Turkey be in all this geopolitical masturbation pool in the Belgian capital? Nowhere in fact, as Eurocrats have one dark secret about Turkey joining the EU. Delighted that France and Germany constantly wheel out their far right wing groups to remind the middle classes that we don't want millions of Turks in the heart of Europe, Europhiles keep a secret from you, which you would never guess. The euro elite doesn't want Turkey in the EU for the simple fact that the EU institutions would be obliged to take on their quotas of staff - even in high places. For the first time ever, Muslims would have to be given jobs in the three key institutions, which is the sort of thing that nightmares are made of, for the likes of Juncker, Schulz and that other bloke in the cheap suit.

* The Beirut correspondent for Deutsche Welle in Beirut but previously covered the EU from Brussels for a number of British newspapers between 1994 and 2006. @MartinRJay
RELATED TOPICS