The 'right' to dehumanize and humiliate Erdoğan 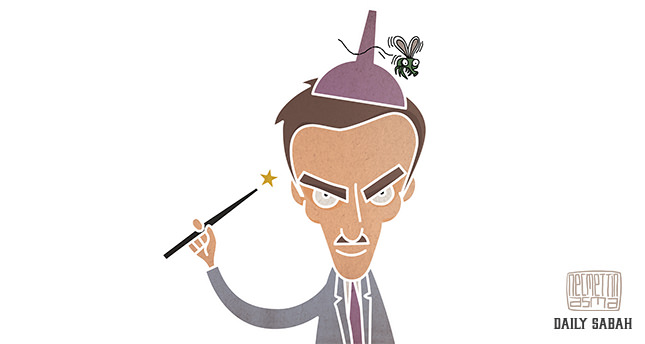 A poem with insults of a foreign head of state was read on German public television ZDF. Let's see what kind of such incidents that go over the limits of morality will appear in the near future

A poem that German satirist and comedian Jan Böhmermann recently read on his late night show, "Neo Magazin Royale" on German public television ZDF, has caused controversy. The poem's content made references to sex with goats and sheep, drew links to repression of Turkish minorities and described President Recep Tayyip Erdoğan in obscene terms, comparing him to pedophiles. The choice of words is obscene and distasteful; the content also has anti-Turkish resentments.

The German government distanced itself from Böhmermann's poem, labeling it as "deliberately offensive." ZDF removed it from its website and YouTube channel after the controversy arose. Most importantly, ZDF's director of programming, Norbert Himmler, emphasized in a statement that the network gives wide opportunity to satire formats, "but there are also limits to irony and satire. In this case, they were clearly exceeded." Indeed, "goat f..ker" is too offensive of an expression to be categorized as satire and be excused as inappropriate behavior.

Böhmermann could now face a conviction of up to three years in prison for insulting a foreign head of state, according to paragraph 103 of the German Criminal Code, if the court considers his smear poem as intended slander. The Turkish government and Erdoğan made an official complaint against Böhmermann's defamation.

To understand the real point of the critiques and the outrage caused by the abusive poem, we have to distance ourselves from a narrow point of view of accusing Erdoğan of being intolerant and try to see the whole picture. The disagreement with Erdoğan's politics leads to the politicization of an intended provocation and character assassination. In other respects, linking German Chancellor Angela Merkel's criticism of Böhmermann with the EU-Turkey deal is nothing more than going off on a tangent. Expecting people, no matter whom, to tolerate defamation and mockery of their person is unfair. Defaming people and humiliating their dignity should not be that easy or remain unpunished.

For instance, in 2005, then German Interior Minister Otto Schily got furious and annoyed about expressions and cartoons in the Turkish newspaper Vakit that compared him with Hitler and showed him in a concentration camp. Schily's colleagues declared their solidarity with him and Schily immediately asked his Turkish counterpart for an expeditious remedy. Meanwhile, Schily had forbidden the newspaper in Germany. Schily exhorted Turkey with the argument that the insult of a German politician was "incompatible with European legal culture."

Likewise in 2003, Queen Elizabeth II of the United Kingdom and Charles Prince of Wales won an injunction against the Daily Mirror newspaper and stopped it from publishing more details about Ryan Parry's work at Buckingham Palace. Buckingham Palace made an official complaint after The Sun claimed the Queen backs Britain leaving the EU.

Similarly to this, four years ago, Pope Benedict XVI took the publication of the German magazine Titanic to court after it showed him soiled on its cover. A state court in Hamburg issued a temporary injunction against the magazine. The issue was not allowed to be distributed and the picture was not allowed to be published on the Internet. As we can see, the pope was not too amused about the vulgar presentation of him in a satirical magazine. The magazine was blamed of damaging his personal rights as well as the sense of Catholics in the pope's person.

These examples show that the discussions here were held on the grounds of personal and human rights instead of the freedom of press, which argue that personal rights are superficial to freedom of expression. There is a fine line between freedom of opinion and defamation, even if they are public figures.

One may dislike Erdoğan for their own reasons, but this cannot justify his dehumanization. Böhmermann's smear poem was a step too far to be defined as just satire and has to have consequences, as it is merely defamation of a person's reputation and character. In a constitutional state, nobody is privileged regarding crimes, not even journalists, artists, academics, authors or satirists.

THIS POEM IS THE REFLECTION OF SOME MINDSETS

The first article of German basic law says: "The human dignity shall be inviolable," which also protects a state leader's dignity as well as the dignity of Turkish people who are represented in the head of state's position as the president. Indeed, apart from this, there are also racist and offensive expressions against Turks in Böhmermann's poem. So, Böhmermann cannot escape his mockery with excuses like he is just criticizing, as there is an obvious attack targeting Erdoğan. The most absurd thing here is that Böhmermann's poem is defined as performing art. Since when is violence against personal rights described as art? What would it have been if the target was not Erdoğan, but another political or public figure? Replacing Erdoğan, for instance, with U.S. President Barack Obama or British Prime Minister David Cameron is enough to make the dimension clear of how far Böhmermann went in his so-called satire, which was below the belt. It would be as blasphemous and character assassinating as it was for Erdoğan. It is unthinkable that even comedians like Böhmermann would satirize the Holocaust or the so-called Armenian genocide, especially in Europe where genocide denial is illegal, which again shows that there is a limit to freedom of opinion. But, Böhmermann read six stanzas of slander.

It is also debatable, however, if it was worth raising tensions, to summon the German ambassador and to make an insolent and insignificant comedian like Böhmermann so popular and make him look like a victimized person who supposedly needs public support and solidarity.

Böhmermann's poem was clearly irresponsible and vulgar. Defending Böhmermann in this case undermines human rights, as freedom of speech ends at the point where other people's personal rights are violated. If this was just performing art and an issue of freedom of opinion, imagine how many people would break the law. There is no right to humiliate anywhere in the world. The value of the freedom of speech and opinion should not be understood and turned into freedom to humiliate. This reminds us of a famous quote from Merkel: "When it comes to human dignity, we cannot make compromises."