France, UK, Germany: The rebirth of fascism in Europe 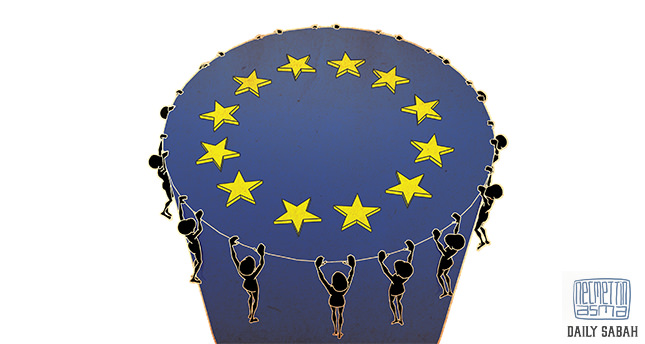 In the post 9/11 world order, the problem of 'otherness' is an already available book on the Western shelf. Additionally, anti-migrant and anti-Islam sentiments have been increasing throughout Europe as exemplified the most in France, the U.K. and Germany through the rise of neo-fascism, now with the most recent arrivals to the continent as the victims

The rise of far-right movements and the conservative rhetoric establishing a new otherness in Western politics in general and in European contexts in particular, has drawn attention to the dangers of a new wave of fascism, or neo-fascism, rising against Europe's minorities, refugees, migrants and particularly toward Muslims, in recent years.

Without going into an in-depth chronological list of events, it is important to highlight a few symbolic moves by European politicians as well as the rise of social movements that fuel far-right rhetoric, allowing one to question the complexity of fascism in the European context.

On April 12, French Prime Minister Manuel Valls said that France should ban headscarves in universities, proposed as his way of fighting extremist ideology. This was, in a way, calling for an expansion of the ban that was imposed for primary and secondary schools in 2004.

On March 30, France's Minister for Women's Rights Laurence Rossignol said that fashion companies launching lines targeting Muslim women are being "irresponsible," as they promote oppression of women's bodies. When the minister was confronted by the interviewer who then asked about women choosing to wear Islamic apparel, she responded: "Of course there are women who choose it. There were American negroes who were in favor of slavery." She was able, whether intentionally or not, to discriminate against Muslim women, women in general and black Americans in one sentence.

In France's case, the rise of political figures such as Marine Le Pen and the Front National, which she heads, is another example of increasing far-right politics. Right after the Paris attacks, Le Pen called on putting border walls around France and said: "My aim is clear to stop immigration both legal and illegal." In a way, this echoed what Republican presidential candidate Donald Trump has been saying throughout his election campaign in the United States when he called for banning all Muslims entry to the United States. Maybe this is why Le Pen endorsed Trump.

France is not alone concerning the rise of far-right politics in Europe. In the U.K., Conservative party politics have also given way to the rise of Islamophobic and anti-migrant sentiments. In January, Prime Minister David Cameron announced a 20 million pound fund to "teach Muslim women to speak English." This was Cameron's proposal to confront extremism. Again, was Cameron not aware that many professional Muslim women are employed in both public and private sector jobs in the U.K.? Or is such discriminatory political language about Muslim women O.K. to use? It is also noteworthy to mention that in 2015, hate crimes showed an overall increase of nearly 20 percent in the U.K., according to data released by the government. In 2014-15, there were 52,528 hate crimes recorded by the police, an increase of 18 percent compared with the 44,471 recorded in 2013-14. The number of race-related hate crimes increased 15 percent, and over the same period, religious hate crime increased 43 percent.

The situation in Germany, the EU superpower, is similar to both France and the U.K. The xenophobic and anti-Islam group, the Patriotic Europeans Against the Islamization of the West (PEGIDA) has held many rallies, demonstrating against refugees and Muslims. Despite Chancellor Angela Merkel's efforts for refugees, the country has seen a spike in anti-Islam, anti-migrant sentiments, including personal attacks and attacks on property belonging to foreigners. Aside from PEGIDA's momentum, the right-wing Alternative for Germany (AfD) party has also been utilizing Merkel's open-door policy for refugees, attracting protest voters who are not in favor of incoming refugees.

Such tendencies in Europe's superpowers are also echoed in smaller European states such as Hungary, Slovenia and Austria. The harsh stance against refugees or Muslims in general in these countries has been keeping politicians busy with increasing right-wing political rhetoric.

When European history of the last 100 years is revisited, there are a handful of moments where fascism ruled over diverse or egalitarian societies. One aspect of fascism can be defined in the simplest terms as authoritarian nationalism. This is what Benito Mussolini achieved in Italy in the early 1920s and what Adolf Hitler promoted in Germany from 1920 to 1945 . Spain also had its fling with fascism with Francisco Franco from 1939 until his death in 1975.

Such examples and their aim of establishing superiority over others are still fresh memories. However, with the spread of economic liberalism and the market economy in the 1970s and the end of Cold War, the phenomena that economic relations will overcome political differences and through economic bridges, politics will eliminate dictatorial and fascist regimes, as cooperation and relationship building was a prerequisite for economic growth.

Where do we stand NOW?

Liberalism was seen as the latest and last savior from conflict after World War II. That is why in the 1960s Daniel Bell's "End of Ideology," which theorizes that the Western world has come to a consensus that the ideological period has ended. In other words, conflicts were over, and now agents incline toward political pluralism and mixed economy, leaving no room for centralized power.

This was supported in Francis Fukuyama's book "The End of History and the Last Man," which was published in 1992 and argues that Western liberal democracy was the ultimate arrival of humanity's social development.

Meanwhile, another thinker, Samuel Huntington, argued against Fukuyama that at a global level, people will come across conflicts due to their cultural and religious identities after the end of the Cold War.

Huntington's theory, in light of the recent rise of neo-fascism in Europe, has been resurfacing, with many arguing that it is the clash of civilizations in Europe when refugees are not accepted, xenophobic attacks rise and Islamophobic or other hate crimes are committed.

However, when Huntington's mainstream reading of sociocultural and socio-religious history is avoided, one can explore that what Europeans considered as the other is now within the borders of European states, compared to when it was simply a matter of foreign policy. The others, i.e., those who are not European, white or Christian, once are only a threat that existed outside European borders. As such, the far-right and neo-fascists in Europe were silenced, but they still had small momentum at times. However, the post-9/11 world order and the recent conflicts in the Middle East has forced the other to seek refuge in Europe. The Syrian civil war and its resulting refugees pouring onto European shores has brought forward a surge of neo-fascist movements that now have to deal with the threat of the other within their borders. Through immigration or asylum seeking, nationalist or fascist resentment rises.

Thus why, the recent surge of neo-fascism cannot be explained through Huntington's clash of civilizations, but rather as a result of the mobility of the other, which is seen as a threat.

Moreover, the rise of neo-fascism in Europe, while not a result of a clash of civilizations, should not be used as an excuse against the rise of radical extremist groups in the Middle East and their supporters in Europe, particularly Muslim youth. While a small number of Muslim youth fallen victim to extremist ideologies, which are not supported by most of the nearly 20 million Muslim Europeans, the reasons behind the radicalized European Muslim youth falling for such distorted interpretations of Islam is another discussion.

Here, the new neo-fascist period can be considered as a transitional period. If it turns out not to be transitional, its permanency will create dangers of social instability in Europe. In other words, it will not lead to a clash between civilizations, but rather an intra-continent social and political conflict among the members of European communities, as Europeans, in social and political terms are also not heterogeneous.

As such, the recent rise of neo-fascism in Europe must be addressed through re-introducing political pluralism and acceptance of all segments of society through implementation of social policies rather than emphasizing political rhetoric that discriminates against new members of European communities be they migrants, refugees, Muslims, Jews or other minorities.