Iraq: Something's got to give as 'reconciliation' remains a fancy word in a UN press release 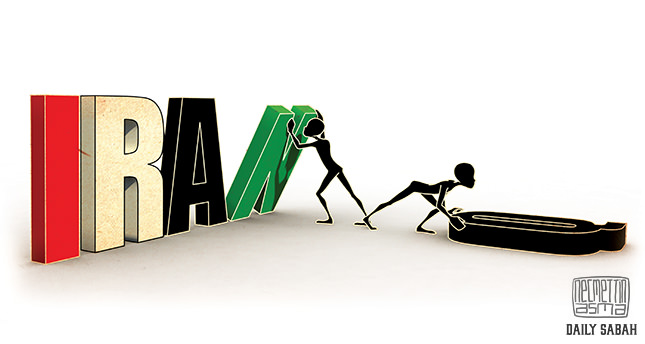 The EU and U.S. are unable to help rebuild Iran's proxy state, which could probably learn a lot from tiny Lebanon

As Iraq treads wearily forward toward regaining if not all, then most of its western DAESH-held flank, regional experts are asking if this is not the time for politicians to make forays into a new order with reconciliation its mainstay.

U.N. Secretary-General Ban Ki-moon recently called on the Iraqi government to step up efforts to foster reconciliation between the nation's Shiite and Sunni Muslim communities in order to combat DAESH.

"National reconciliation is an important part of the strategy to defeat DAESH, who have ruthlessly exploited divisions and targeted the marginalized and disenfranchised," he told a joint news conference in Baghdad with Iraqi Prime Minister Haider al-Abadi.

The U.N. chief was referring to the country's minority Sunnis who complain they have been marginalized by the Shiite-led government installed after the U.S.-led invasion in 2003, which led some of them straight into the hands of DAESH two years ago.

There is a kernel of truth in the assertion that the Sunni community has shown some sympathy toward DAESH in preference of allowing Shiite militias to control their region, which in turn has caused aggregated distrust from Shiites who are weary of Sunnis being given any special military powers in the region.

This vicious circle led to many of Iraq's main cities being taken in the first place while tribal leaders bickered.

Yet creating the basis of reconciliation now in Iraq - given that Mosul will certainly be retaken by Iraqi forces soon - is a tall order, and one that will require inertia from political dynamism, which neither Ban nor Abadi presently possess. And as Kurdistan Regional Government (KRG) peshmerga fighters eye Iraqi soldiers with suspicion and envy - as the latter has U.S. military equipment that could be put to better use in the hands of Kurds - one is often left asking whether Kurds are part of the solution or the crux of the problem in Iraq.

So what is required?

An idea recently bandied about to dissolve the distrust and odium between Shiites and Sunnis is to allow provinces in the Sunni heartlands to have their own divisions of Iraq army units supposedly to beef up security against a DAESH takeover in the future. But this idea cannot be accepted by Shiites who fear that the power of such groups might swell or, indeed, that the army units might well be taken over by extremists.

Indeed, the main differences between Sunnis and Shiites in Iraq stem from the Shiites' refusal to grant local political authority to the Sunni tribes from Anbar province, and the cities of Ramadi and Fallujah, with scant representation in national governance.

Critically, this exclusion has left no choice for Sunni tribes in Anbar province other than joining DAESH to protect their tribal control.

So while giving them their own local army units might bolster local authorities' power, powerful Shiite groups preferred - and still prefer - that some of them side with DAESH rather than be given greater legitimate power.

Yet it seems that both Abadi and Ban are stuck on this sole idea, as the U.N. chief mentioned it again. He told lawmakers that Iraq needs to do more to "empower local governments," encourage the private sector and reform the state's economic policies, which are currently hamstrung by waste and corruption.

Until the outbreak of the Syrian civil war in 2011, many looked at Lebanon as a model of bridging sectarian divide. Beset with its own problems following a 15-year civil war, this tiny country did a great deal to confront the past and get on with accepting a multi-ethnic patchwork of groups who, in the end, got tired of war and wanted peace - any kind of peace. The spoils of post-war Lebanon were divided among the warlords and corruption eclipsed murder and mayhem. For many years, Sunnis and Shiites coexisted here and more or less accepted each other's groups while the crumbs of an ailing economy fell into the laps of those who could be bothered to work and build small businesses. It was hardly perfect, but in Lebanon, Sunni and Shiite families have learned to get along. Having an economy of any sort is key.And this should be the priority in Iraq now. Prosperity may well be the path toward revisiting sectarian hatred. Once Mosul has been retaken, there may well be an opportunity for Abadi to try and rebuild the economy.

Giving a boost to the private sector may be the only realistic option as the World Bank prepares to invest in restructuring once DAESH is uprooted. Business growth may be the sole root to reconciliation as jobs and opportunities often straddle sectarian divides. But it will take a leader with formidable political skills beyond Abadi's to strike this hot iron in the coming months and to try and mend bridges while accepting that the Shiite dilemma in Iraq is fundamentally flawed, given that no one these days even bothers pretending that the country is now an Iranian protectorate.