Smoke and mirrors: Deception, hypocrisy and the betrayal of the EU-Turkey deal 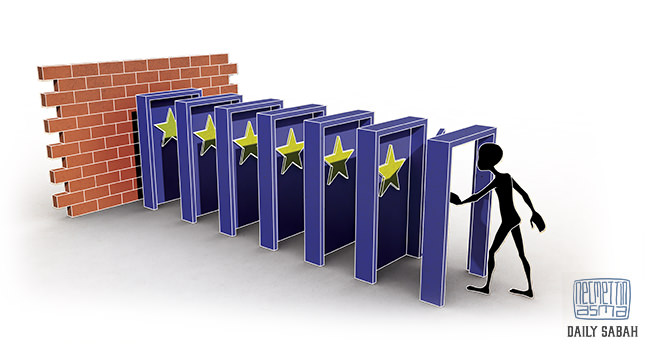 Turkey needs to take off its rose-tinted glasses when viewing any deals with Brussels, as EU leaders implying that visa-free travel is possible are simply lying

The hypocrisy is breathtaking, but have you not noticed how, when just a while ago it seemed that Turkey was a 1,000 light years away from joining the EU, many heads of state in old Europe talked as though accession was merely a matter of a few years away. Even the U.K.'s David Cameron, the prime minister of the one EU country that pushed Turkey's accession more than any other, in 2010 said he was behind Ankara's bid and committed to making it happen.

But now that Turkey's accession is within grasp, a pattern of hypocrisy appears to be emerging and it is one that Turks should note as the norm, rather than the exception, following Cameron's comment this week that Turkey "is decades away from EU membership."

And it will be the same with France and Germany. Recently, Germany appeared to be warming more and more toward Ankara's bid to be the first Muslim country to join the 28-member bloc, but the signals are also mixed. Germans seem more open to the idea, but just this week a survey there revealed that 80 percent want all EU countries to go back to controlling their own borders - a stunning admission that immigration is becoming a chief, and in some cases sole, worry for Europe's masses.

In some ways, the much-coveted visa-free deal, expertly negotiated by President Recep Tayyip Erdoğan, could be the straw that breaks Turkey's back though. If it were to be granted, it could mean that millions of Turks would simply move to Western Europe seeking a better life, bringing not scores of Muslims, but millions, flocking to France and Germany in a period when really the last thing those governments need is a new immigration crisis. It all rests on two issues: The class of immigrant (blue collar or university graduates) and the numbers.

But it throws up an interesting question: Who needs who the most in this marriage of convenience born of the loins of one crisis piled upon another? The European Union chiefs are desperately worried that an immigration fiasco could be a final body blow to the whole EU project itself. With the Schenghen agreement already looking in tatters, EU leaders in Brussels are wondering whether the project will even make it to the next European elections, penciled in for 2019. Yet the crisis on Europe's soft underbelly could also be turned into a saving grace.

It is an interesting idea, but one fraught with risk. If Syrian refugees are kept out of Europe but replaced with millions of impoverished Turks who refuse to go back to Turkey - and then bring with them the usual bin liner of social strife that accompanies being a refugee - then a racist backlash, one which has never been seen before in old Europe, will smack EU leaders in the face and Europe's voters will be pushed over a line when it comes to tolerating a single trading bloc that does not even boast any growth, cannot control its own borders and seems to know no limits in taking insane risks with the future prosperity of its own people just to keep overpaid gravy train jobs in Brussels.

Something will snap. And it will be Turkey who will be the agent provocateur.

And given that the EU is hanging on by a thread now with a June referendum for the U.K. just weeks away - and many fearing that an "out" vote will have a domino effect with the Netherlands, Denmark and the Czech Republic - does anyone think that EU member states are just going to sign off on the visa-free deal without a load of disclaimers and conditions?

Personally, I do not believe in the Tooth Fairy and I know Santa Claus is definitely not the real deal.

So why are Turks indulging themselves? Not only does Ankara and most of the Turkish press believe that this deal is in the cards, but most now are looking at accession to the EU as a near certainty.

But it really is not. Neither deal is anywhere near from certain and Turkey should take a more sober view about what is really on the table.

Like most poorer countries on the periphery of the European continent, it places too much prestige on the European Commission itself - a body so fabulously corrupt that no one who even works there can say how many employees it actually has. It has no right to either offer Turkey a deal, or finalize it. This real power is in the hands of member states, and although many journalists in Ankara feel as though the old guard of Germany and France is softening, the reality is that there is deep skepticism right across Europe about even the legal validity of the deal and whether it can even be implemented. And there is the little matter of European Parliament - a sort of fake assembly full of 24-year-olds in miniskirts and literally full of lobbyists representing the interests of big business. To the untrained eye it appears to be some sort of democratic institution, yet in reality is it merely a theater of loyal players who pretend that the EU has democratic legitimacy and is there to rubberstamp decisions made by the more powerful European Commission.

The problem for Turkey is that the EU is really playing Russian roulette and may not even be around to give it what it owes after all the shooting has finished and the bodies can be counted and tagged. Brussels really is in the Last Chance Saloon and has no experience with any foreign policy initiatives, yet is taking on the herculean task of not only keeping refugees out, but buying Turks' support to keep the cheap suits in Brussels in their jobs for a few more months, or, if lucky, years at best. It is bribery in its purest sense and Turkey has shown that it can be bribed. No one is even pretending that there is anything morally upstanding about the deal, as the European Commission does not, in reality, care about the country's human rights' deficit or its worrying regard for the extinct breed of curious creature that once roamed the plains of this old country called "journalisticus oppositinnica."Soon there will be no journalists left in Turkey for anyone to lock up and so therefore nothing to complain about by whining 10-a-penny European Parliament deputies. It is the very model that the EU has itself in Brussels. Stamp out any remains of real journalism and create a monolithic press room of morons who are proud of their press badges and actually think they are clever in shagging a euro press officer - as was the case in 2002 in Brussels with a Reuters hackette - just to get closer to the spoon-fed garbage of press releases and leaked reports. Believe not anything the European Union tells you, as even if they manage to spurt the truth, their agenda is about keeping the euro elite in office. Nothing more. Believe even less from EU leaders, as most lie about Turkey joining the EU. And stop being side tracked by deluding yourself that old Europe is going to let you in. It is not. If it does, I will eat my plastic Lebanese press pass live on Turkish TV.

* The Deutsche Welle correspondent in Beirut who also writes for a number of British newspapers as a Middle East correspondent.
RELATED TOPICS