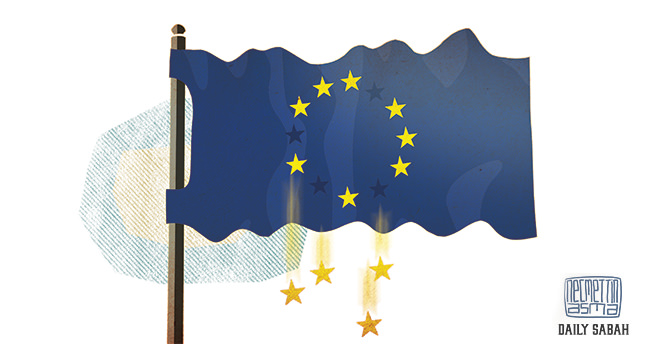 European Commission President Jean-Claude Juncker told a meeting of the Council of Europe last month that Europe had "lost a part of its attractiveness" and warned that a slowing birthrate coupled with shrinking economic potential place the continent's future at risk. Juncker was visibly distressed while visiting the Parliamentary Assembly of the Council of Europe (PACE) in early April. The continent, after all, is facing serious challenges.

Considering Turkey's strong political and economic ties with the European Union, the continent's well-being is extremely important to policymakers in Ankara. Since the Justice and Development Party (AK Party) rose to power in 2002, Turkey has implemented a number of political, economic and social reforms to strengthen its democracy. And even though the government does not see eye to eye with Brussels across the board, it wants to crown 250 years of modernization with EU membership.

In 2001, when I published a novel about an Armenian politician becoming Turkey's prime minister, the idea that a non-Turkish citizen of Turkey could win an election bordered on science-fiction. Today, I proudly represent thousands of voters as a deputy in Parliament as an Armenian member of the AK Party caucus. I serve as deputy chairman of the Human Rights Committee and remain a member of the Constitution Committee and the EU Harmonization Committee. Furthermore, I represent Turkey at PACE in Strasbourg.

Representatives of Turkey's Armenian, Greek, Syriac, Arab, Yazidi and Roma communities serve their country in Parliament. Needless to say, we need more non-Muslims to hold public office. But it is important to recall that Turkey has come a long way to get here.

For six decades, Turkish citizens of Armenian, Greek and Jewish descent were practically ineligible to work for the government – not even as janitors. The authorities resorted to intimidation and other tactics to drive non-Muslim schools, churches and nongovernmental organizations out of business and force non-Muslims out of Turkey. To deprive non-Muslim communities of financial resources, the Turkish state confiscated at least 800 properties owned by Armenian nongovernmental organizations. In violation of the Treaty of Lausanne, Turkey made it impossible for non-Muslim communities to repair churches and schools and banned the establishment of new churches. During the same period, the vast majority of Turkey's post-World War I minorities ended up leaving the country, whose self-proclaimed Westernized secular elite in Turkey made their stay impossible.

Traditionally, Turkey's Armenian minority sided with center-right political parties that distanced themselves from the oppressive state machinery dominated by the Republican People's Party (CHP). Under center-right governments, minority groups experienced relative ease. For instance, it was Adnan Menderes's Democratic Party (DP), which beat the CHP in 1950, that created an exception in the otherwise repressive system to make it possible for Turkish Christians to open a new monastery in Istanbul. A decade later, the monastery was shut down by the military junta that overthrew the democratically elected government and executed ousted Prime Minister Menderes with two cabinet ministers. Following the coup, Dr. Zakar Tarver, an Armenian member of the DP who represented an Istanbul district in Parliament, was tortured to death, although the coroner said he had suffered a fatal heart attack. The monastery, meanwhile, was shut down.

For the situation to improve, Turkey's minorities had to wait over 20 years. Upon winning the 1983 parliamentary election, Turgut Özal's Motherland Party (ANAP) took steps to reinstate exiled non-Muslims' Turkish citizenship. In the wake of this decision, minority groups regained access to their properties in Turkey. To be clear, Özal faced the same kind of criticism from his opponents that President Recep Tayyip Erdoğan faces today. Although he was one of the most liberal and reformist figures in Turkey's political history, Özal was labeled a dictator and an enemy of the people. In the end, he died in office under suspicious circumstances.

Today, many Turks consider Erdoğan the latest in a line of reformist politicians that includes Menderes and Özal because he sided with the people against privileged power brokers. During Erdoğan's tenure, disadvantaged communities across Turkey experienced a bump in their living standards. Since 2002, Erdoğan and his AK Party have dominated the country's political landscape. According to opinion polls, the party enjoys the support of 55 percent of voters.

Non-muslim rights: paving the way for a healthy democracy

Over the past 14 years, non-Muslim communities – especially Armenians – took back hundreds of illegally confiscated properties from the Turkish state. When the government introduced a bill to address our grievances, main opposition CHP Chairman Kemal Kılıçdaroğlu and his CHP colleagues accused the AK Party of "undermining the state" and actually appealed to the Constitutional Court to annul the law.

The government's efforts to promote a healthy democracy are not a thing of the past, either. Last month, two developments reaffirmed our view that the country is taking steps in the right direction.

On April 24, Erdoğan sent a letter to the Armenian community, which was read out loud at the Church of St. Mary in Istanbul. Having lifted a ban on commemorations for our ancestors who perished in 1915, the president wrote:

"I respectfully salute our citizens who have gathered at the Armenian Patriarchate in Istanbul today to remember Ottoman Armenians who lost their lives under World War I's tragic circumstances. I am pleased that today's ceremony takes place in Turkey – the most meaningful place to share the pain of Ottoman Armenians and honor their memories. In Anatolia, where people genuinely share joy and pain and do not disregard their duties toward one another, conscience and justice take precedence over all else. In line with this approach, our knowledge of history and our idea of humanity, we shall continue to honor the memory of Ottoman Armenians. We will continue to recall and remind people of 1,000 years of coexistence between Turks and Armenians. We will keep promoting friendship and peace in response to those who seek to politicize history and drive a wedge between two neighboring peoples who share history and tradition, through hateful and hostile words. Once again, I respectfully commemorate Ottoman Armenians who perished and offer my condolences to their surviving relatives. I also wish to remember all Ottoman citizens regardless of their ethnic and religious backgrounds who lost their lives around the same time. I would like to express once again that we share a common pain. I would like to take this opportunity to thank all Armenian citizens [of Turkey] who made valuable contributions to our country."

Certain people believe that the government has adopted this approach to appease Armenians around the world during the 100th anniversary of the 1915 tragedy. The fact that the president issued the above statement amid clashes in the Nagorno-Karabakh region alone shows that the cynics are wrong. Against the backdrop of growing racism in Europe, Turkey deserves some credit for taking serious steps to promote equal citizenship.

"Where we stand on secularism is written in the charter of the AK Party, which I founded. I made the same point in a speech delivered at the Opera House in Cairo, Egypt, where I said that secularism was a guarantee for various religious groups and argued that the state must keep an equal distance from all religious communities. As a matter of fact, the Muslim Brotherhood's Mohammed Badie was shocked to hear what I said, only to agree with me after a private conversation. If the authorities use secularism as a tool against religion, they will inevitably encounter certain objections. Secularism, however, means that the state will keep an equal distance from all groups, including atheists. It means that the state will guarantee [the free practice of religion by] all groups. If the Constitution protects all faith groups, why should it be necessary to mention Muslims in particular? If I can freely practice my faith as a Muslim, the conversation is over. If Christians can freely practice Christianity and Jews can freely practice Judaism and atheists can freely be atheists, the conversation should be over f﻿or them as well."

At a time when Europe bows to racism and radical groups gain control of the Middle East, the flourishing of a secular democracy in Turkey must be considered a big opportunity for the world. Instead of demonizing Erdoğan with outlandish accusations, it is necessary to appreciate the fact that Turkey has been doing the right thing without spending too much time on the consequences. The government has not just been good to its own citizens either, as 3 million Syrian refugees have been welcomed into the country regardless of their ethnic, religious or sectarian backgrounds. Istanbul alone has around 500,000 Syrian refugees. In places like Kilis, Syrian refugees outnumber the local population. Since 2011, the government has spent $11 billion on humanitarian relief. An estimated $30 billion was spent by volunteers and nongovernmental organizations. Surprisingly, there have been no attacks or discrimination directed against Arabs even though Turkey has been actively fighting DAESH, the PKK and the Revolutionary People's Liberation Party-Front (DHKP-C) for months. Even if Europe fails to acknowledge Turkey's contributions to regional stability, we will not change our course. Time will tell that Turkey is right.
Last Update: May 11, 2016 1:09 am
RELATED TOPICS