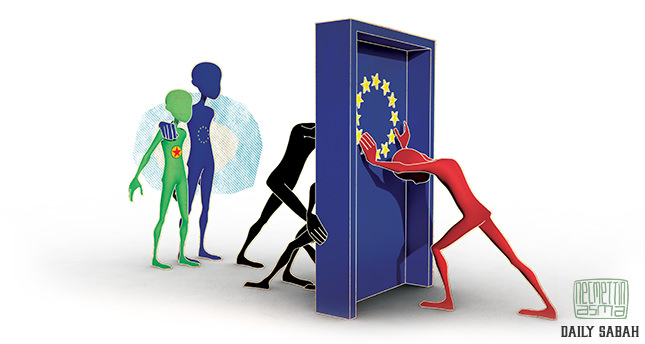 Kati Piri's biased report essentially says that the EU policy of double standards should not be revoked by this deal and the EU needs a new understanding concerning its relations with Turkey, which will shape the destiny of EU not that of Turkey

Some serious problems have emerged despite all good intentions and efforts on Turkey's part after the signing of the recent refugee return deal between the European Union and Turkey.

Chief among these problems is the lack of support that Turkey expected, except for various hollow statements, while it tries to cope with the scourge of terrorism that is worse here than in any European country.

Understanding Turkey and supporting it in the face of a big calamity like terror was misinterpreted as conflicting with objective criticism required by the EU membership process. Turkey returned the EU's 2015 progress report to European Parliament as it did in 2014. The picture of Turkey presented by Dutch European Parliament deputy, Turkey Rapporteur Kati Piri, was quite problematic, biased and far from constructive.

The report focused on the five topics of Turkey-EU relations; respect for the rule of law, democracy, human rights, fundamental rights and freedoms; the reconciliation process and the situation in southeast Turkey; cooperation between the EU and Turkey regarding the refugee crisis and Cyprus talks.

The report has softer language concerning the last two topics because they are related to issues about which the EU needs Turkey's help, however, from Turkey's standpoint, the refugee deal is far from satisfactory but it has a potential to save Europe from a disaster. Even at that point, however, Piri put in a caveat saying that Turkey's EU accession process should be dealt with separately from the refugee deal. In other words, she essentially expressed that the policy of double standards should not be revoked by this deal.

For some reason, though, the EU demands Turkey alter its anti-terrorism legislation, which forms the legal framework for fighting the PKK and DAESH, which is itself directly related to the refugee crisis and the Syrian civil war, and to introduce liberal arrangements.

IT ISN'T HARD TO DO

Interestingly enough, while expressing concerns over the state's takeover of some media outlets, the report hardly mentions the "Gulenist Organization within the state" which faces many criminal charges and is in active cooperation with the PKK. It is reported that the "Gulenist Organization" is leaking intelligence to the PKK gathered through its operatives who have fled abroad or are still in state institutions. The growing number of casualties among security forces in the fight against the PKK and DAESH is also ascribed to this. For example, the stolen luxury car used in the PKK's latest suicide car bombing in Ankara was detected by the license plate recognition system, but an alarm was not sounded since the system was deactivated.

It is known that the Gülen Movement has established itself in Brussels and Strasburg and engages in significant lobbying of Eurocrats. But how to explain the ignoring of the coup plots against an elected government and constitutional order by Gülenists, who hold considerable power through media and pseudo-nongovernmental organizations in addition to infiltrating the police, judiciary and intelligence bureaucracy in an important country like Turkey? Through their crypto operatives in the security bureaucracy and judiciary Gülenists illegally wiretapped tens of thousands of people on the order of its Pennsylvania-based leader, blackmailed them and filmed their private moments. They abused trials like Ergenekon and Balyoz (Sledgehammer) to eliminate the innocent people who had come in their way.

Gülenist media outlets have served as a strike force at the center of these operations. They have defamed and falsely incriminated the people targeted. Gülenist prosecutors, judges, police officers and soldiers have created a billion-dollar mafia network while trying to reshape the country in cooperation with the media. And they tried to stage a judicial coup against an elected government on Dec. 17 and Dec. 25 through five separate and fabricated investigations.

More importantly, they recorded and leaked a sex tape of Deniz Baykal, the former Republican People's Party (CHP) chairman, and thus redesigned the CHP. Current CHP Chairman Kemal Kılıçdaroğlu has recently refused to testify to the prosecutor as part of an investigation into the leaked sex tape. However, it is alleged that two CHP members close to Kılıçdaroğlu had been involved in this plot.

One wonders why the EU, European Parliament, European Commission, and the Council of Europe do not take an interest in understanding these great upheavals in Turkey. Our Italian colleagues know shadowy government structures very well since they have experience with similar organizations. But how is it possible that the appointment of trustees to Gülen Movement-linked, pseudo media outlets by court order and the arrest of those people facing charges of plotting to topple the constitutional order as part of a terrorist organization are cited in the report as violations of the freedom of the press and expression, especially by ignoring this entire framework when Turkey is facing such an insidious and grave attack against its democratic system and secular lifestyle?

We observe the same insensitive approach and shallowness regarding terrorist actions of the PKK, DAESH and the PKK Syrian affiliate Democratic Union Party (PYD), which have been targeting the country's southeast and, more recently, its big cities.

The issue is not only about what the report says. The EU's insensitivity about it is also problematic. What other candidate country has been curtly told: "I don't care about the difficulties you experience; create a country with the standards I set for you?" For instance, can Turkey redesign the Middle East? Or can it defeat DAESH on its own? Can one know how long the fight against the murky PKK, which has long forsaken any claim to defend Kurdish rights and made life miserable for Kurds themselves, will go on?

IT'S EASY IF YOU TRY

The terrorist attacks in Paris and the resulting death toll saddened us much. Again, we understand why France has extended the state of emergency put in place after the attacks for successive three-month periods. But Turkey, which is almost on a daily basis living through the terrorism that France saw, adopts a much more liberal and democratic approach in its fight against the PKK and DAESH. It does not interrogate 6-year-olds, nor does it raid homes without a court order nor close mosques and churches.

Europeans must imagine such a scene where terrorist organization X digs thousands of trenches in many districts of Strasbourg, Paris, Brussels or London, fills these trenches with tons of explosives and plants improvised explosive devices along roads. Terrorist organization X also declares autonomy in these liberated areas and uses civilians as human shields. Security forces suffer around 400 casualties and funerals are held every day for fallen soldiers and police officers in various cities across the country. You have enough power to defeat terrorist organization X but need to move slowly and cautiously since it is using civilians as human shields. Meanwhile, suicide bombers linked to this terrorist group blow themselves up at a bus station just 400 meters away from your Parliament, killing 37 civilians.

And although the EU has designated the PKK a terrorist organization, members of European Parliament walk between PKK members, whose supporters set up tents decorated with PKK flags and posters of imprisoned PKK leader Abdullah Öcalan, in Brussels and Strasbourg on their way to the parliament building. The same EU that has not fulfilled its commitments under the refugee deal while you are engaged in such a great and difficult struggle demands you alter your anti-terrorism legislation.

In his latest statement on the issue, President Recep Tayyip Erdoğan said: "You see the attitude from the European Union. They say we should tone down our stance on the fight against terrorism. Since when have you started to govern Turkey? Who gave you the authority? It is impossible to understand what kind of democrats they are. If the European Union sinks to such depths as to address a terrorist group [the PKK] instead of the Republic of Turkey, we are OK with it. Because we look at those who defend causes of terrorist groups the same way we look at terrorist groups. We only need support from our own people. As a country fighting terrorism for 35 years, we can overcome this problem, but European nations cannot do it. Those who stirred up the world when DAESH conducted attacks on them left Turkey alone in its fight against the same organization.

Our town of Kilis is hit by rocket attacks almost every day. Turkey has lost more than 130 civilians and members of security forces in DAESH attacks. The military has hit 3,000 DAESH targets in Syria and destroyed 1,300 of its positions there and more than 3,500 people have been deported since 2011. Calling on a country that wages such a struggle against terrorist organizations to soften its defi﻿nition of terrorism and give up this work is tantamount to aligning oneself with terrorists.

I believe that the EU needs a new understanding in its relations with Turkey, and the issue of formulating this understanding will shape the destiny of the EU, not that of Turkey. Turkey, which has taken in 3 million refugees from Syria and Iraq so far and hosts many of them in the best conditions, is the country that best represents the values of European liberal democracy. On the other hand, establishing an equal and fair relationship with Turkey will open Europe, which is about to be mired in a racism trap, to pluralism again and help it become a world power. Turkey will proceed on its way in any case. Turkey not being accepted into the EU does not mean it is not a European country.

But why should we take unnecessary risks and pay the price for it?
RELATED TOPICS