Abuse of history and Historians without Borders 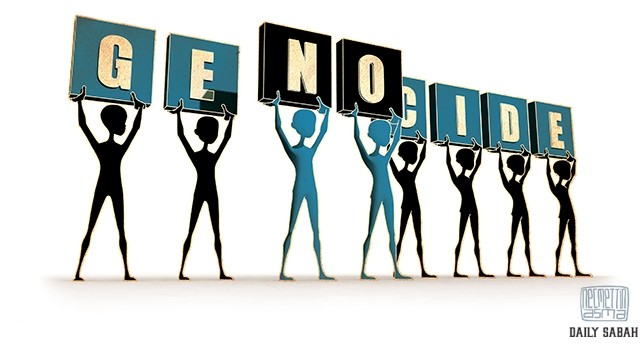 As a term, genocide offers the best possible center for memories to be unified, homogenized and activated with the clear sense of the enemy who tried to destroy the collective self. The perpetrator and enemy in this case are the Turks, and as a result, the political memory of the Armenian diaspora is rooted in a strong narrative of collective victimhood

On May 19-20, Helsinki will be the site of a new conference featuring presentations on the abuse of history in international conflicts. Organized by the newly constituted Historians without Borders, the first meeting will focus on several cases such as the Arab-Israeli conflict, the Russian-Finnish historiography of 1917, the Turkish-Armenian debate over the characterization of the events of 1915, and a few other topics. This multidisciplinary gathering of politicians, activists, historians, political scientists and journalists is focused on exploring the connection between history and memory and abuse of history in international conflicts. Given that Turkey has repeatedly called for an independent commission of historians to examine the events of 1915, this gathering will offer an important opportunity to examine the comprehensive historiography surrounding these events. Thus, these questions become especially relevant: What is the connection between history and memory? How do agents of memory construe a new understanding of the past? What is the utility of the legal term of genocide in understanding past sufferings?

There are numerous studies examining how the social memory of trauma can shape and affect national identity. A real or exaggerated sense of trauma, in turn, articulates an essential framework for individual narratives about suffering. For instance, even Iranian-Armenians in California feel the "pain of the Armenian genocide" that occurred outside Iran, and their own stories are shaped by this collective trauma of suffering, whether real or imagined. The meta-narrative of the genocide story becomes critical for diasporic communities to construct a sense of community and national Armenian identity. This not only occurs in the diaspora, but also in the home country where the process of layering the concepts of genocide to the past has been problematic. For instance, in the Baltic republics, especially Lithuania – and in Ukraine – parliaments enacted laws to criminalize those who "propagate, deny, or harshly depreciating or approving communist or fascist genocide as well as other crimes." Lithuania has banned any attempts to interpret the former communist period in positive terms. Through the power of law, Lithuania seeks to homogenize memory and create an anti-Russian (Soviet) identity. The stigmatizing of those who offer alternative perspective is also labelled denialist and un-Lithuanian.

Constructing a meta-narrative of genocide, disseminating it and preserving the framework require a number of professional agents of memory in these communities along with communal associations to police the narrative of genocide. These agents of memory not only seek to homogenize the narrated story as genocide but also to police the narrative by excluding those who disagree and mobilize the community against those who question this meta-narrative. They seek to establish the truth by protecting it and criminalizing alternative perspectives. As there is more than one past to be examined, the agents of memory use all their resources to canonize their version as the truth and as the only objective history. The events of 1915 are not just about history, but also memory. The past is still part of the present and it is situated within the framework of the present conditions. As long as the past is inhabited and not dead, it is still subject to political needs and conditions.

When Armenians congregate to remember what took place in Anatolia, they create a visible, expansive, profound reality of the past that goes beyond that of individual memory. As psychologists contend that individual memories are fragmented and episodic and they are unified only if they are embedded in some narrative, a shared language of pain and rituals takes form and are reinforced by regular cycles of commemoration. Individuals then tend to accommodate their memories in accordance with the collective memory. They construct and reconfigure their memories to create a particular meaning and a shared identity with the rest of the community.

This brings us to an evolving debate about autobiographical memories – a realization that those memories constitute our core elements of identity and life story, even though they are not derived from our own actual experiences. Jan Assmann aptly summarizes this, explaining that "individuals remember in order to belong," and their memory can go far beyond their own experiences and imagined past of their ancestors.

Genocide, as a term, offers the best possible home for these memories to be unified, homogenized, and activated with the clear sense of the enemy who tried to destroy the collective self. The political memory constructed within the Armenian diaspora is rooted in a strong narrative of collective victimhood. The perpetrator and the enemy are the Turks and, as a result, Armenian identity has evolved within this oppositional matrix. The modern Armenian identity has become a hostage to the genocide debate. What disturbs this identity is the reasonable questioning of the Armenian self-perception as victim. Any pluralist reinterpretation of the events – or even a mention of Armenian collaboration with the Russian enemy – threatens to destabilize this fragile identity.

Thus, the power of law emerges as an important tool for sile﻿ncing alternative interpretations both within and outside the community. The attempt to force an unequivocal interpretation of the past through law risks becoming the most dangerous enemy to the rights and practices of freedom of expression, which includes offering the debate platform essential for a democratic society. So the debate on genocide and attempts to canonize it by criminalizing alternative perspectives threaten the value and existence of democratic discourse and the importance of engaging a pluralistic understanding of the past.

While Armenians insist Turks must remember what took place in 1915, they also prefer to forget what they had done during the same period. The call for remembrance, for example, seeks to conceal their own problematic past. Armenians, too, must account in their remembrances for collaborating with Russian troops, terrorizing the Muslim population and assisting occupying forces who had cut off the access routes to food and essential supplies. Indeed, in their own circles of debate and rivalries, some Armenians would rather forget the past.

Thus, we need to deal with the matter of how the Armenian memory of the events of 1915 is also shaped not just by the suffering they endured, but also their own actions of forgetting, reimagining and searching for a diasporic community as a collective of victimized individuals, regardless of whether the suffering was real or imagined. We must be explicit, cautious and prudent in how we apply the concept of genocide. It should not be used as a proxy for unleashing passion or for stirring deep-rooted nationalist feelings that pit one group against another, i.e., Armenia against Turkey. Genocide has a specific legal foundation that rightly identifies the circumstances in which the term has substantive and proper application.

The time is appropriate to consider the constructive boundaries of what matters in the dispassionate inquiry of history and of the international rule of law that respects mutually the rights and integrity of the people of all nations. Plainly, we cannot abuse history.