The master's house 100 years after Sykes-Picot 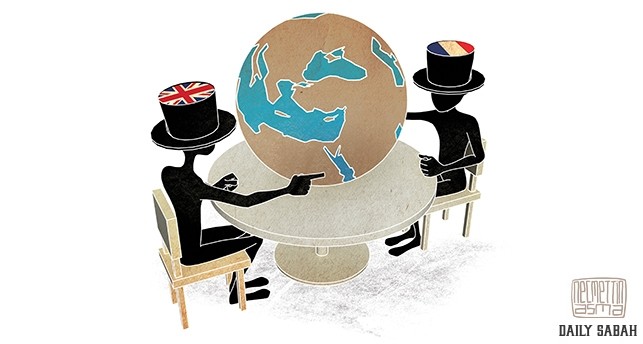 The Sykes-Picot Agreement represents the absence of an authentic, legitimate successor to the Ottoman order and should be seen as part of the last stage in a sequence of when Europe asserted itself by directly organizing the world outside Europe

On May 16, 1916, two rather undistinguished civil servants – Mark Sykes representing the United Kingdom and François Georges-Picot on behalf of the French government – agreed on the division of the Ottoman Empire into British, French and Russian spheres of influence. A line was drawn on the basis of this plan, stretching from the border with Persia in the east to the Mediterranean. Britain would control the areas to the south of the line while France would do so to the north. In each of these regions France and Britain alone would "have priority of right of enterprise and local loans" and "supply advisers or foreign functionaries." More importantly, in the assigned regions Britain and France "shall be allowed to establish such direct or indirect administration or control as they desire and as they may think fit to arrange with the Arab state or confederation of Arab states," which would be "recognised and protected" by both powers. The agreement would be approved later by then Russian Foreign Minister Sergey Sazonov, again, behind closed doors. In return for the acceptance of the British and French claims, Russia would get control of Constantinople and other territories carved out of Ottoman Empire.

A year later the secret plans were exposed by the Bolsheviks following the Russian Revolution and overthrow of the Tsar Nicholas II. The post-Ottoman order that emerged after end of World War I (1914-1918) did not correspond exactly to the map drawn up by Sykes and Picot, as according to the plan, Mosul was to be part of Syria and not Iraq.

There is a legitimate scholarly dispute about the significance of this agreement and its relevance today. After all 100 years is a long time, and there have been lots of developments that cannot, with any confidence, be traced back to what Sykes and Picot were up to. Regardless of the details of the actual Sykes-Picot Agreement, over the years it has gained a symbolic importance that exceeds the details of what was agreed to on May 16, 1916. It is the metaphor of Sykes-Picot, i.e., what it represents, that continues to resonate today. In particular, I draw attention to three features of what the plan represents as being significant and that account for notoriety.

Firstly, the Sykes-Picot plan should perhaps be seen as part of the last stage in a sequence when Europe asserted itself by directly organizing the world outside Europe according to its own cartographic imaginings. Beginning with the Treaty of Tordesillas between the crowns of Spain and Portugal in 1494, through conferences such as Berlin in 1884, which formalized European colonial rule over most of Africa, European maps became templates for reshaping the non-European world. In these maps natural boundaries or historical bonds were often secondary to geometric principles, which filled the vertigo of experiencing space on a planetary scale. The Sykes-Picot Agreement represents not only the 1916 plan to distribute the spoils of victory over the Ottoman Empire, but a series of other unequal treaties, agreements and protocols by which the non-European world was classified, categorized and allocated to Western powers. Sykes-Picot is a sign of European power and authority. It has to be remembered that the British Empire reached its territorial peak five years afterward.

Secondly, Sykes-Picot meant not only new borders, it was also an attempt to transform the cosmopolitan realities of the Ottoman world into narrow nationalism and xenophobia. The Anglo-French carve up of the Ottoman domains meant not only the cultivation of elites willing to collaborate with London and Paris in exchange for privileges and power, it also established the template of patron-client relations throughout the region so that local rulers spent a great deal of energy cultivating their foreign patrons rather than providing for their own people. This pattern continues today when oil riches are used to buy influence in Western capitals at the expense of state sovereignty and popular accountability. In others words, ruling families are linked to Western capitals more than their own populations. So Sykes-Picot represents the history of clientelism in the region, and all that follows from the institutionalization of such client-patron relations.

Thirdly, Sykes-Picot represents the absence of an authentic legitimate successor to the previous Ottoman order. The spatial divisions of the region and divisions between rulers and ruled institutionalized by the Sykes-Picot system culminate in the production of a void and absent or lost center able to bring order, autonomy and prosperity to the region. Sykes-Picot did not allow for viable independent states capable of exercising sovereignty. It was designed to build a state system through which Anglo-French interests, influence and indirect rule could be exercised. This was the house that Sykes-Picot built and this is the house that people of the region still live in. So even though the architects of that house are gone, as the French and British Empires are shadows of their former selves, and the new owners, be they from Washington or Moscow, are able to use that that architecture for their own ends. The main losers remain the people of the region. The Sykes-Picot Agreement symbolizes the plans for building the master's house in the absence of the Ottoman Empire. Such a master's house spread across the globe as part of the process of European colonial world-making.