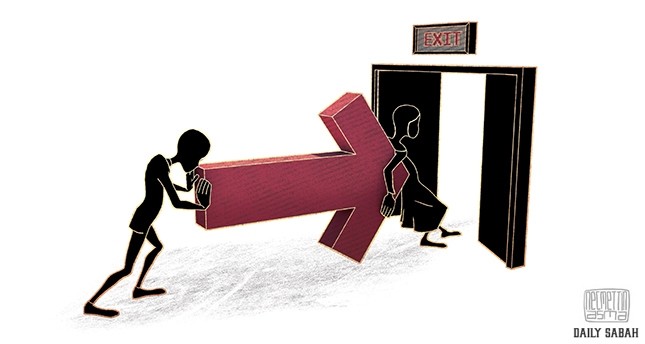 A secularist approach that protects freedom of religion and religious pluralism must be adopted, rather than a form of laÏcité that is used as an alibi for Islamophobic sentiments as unfortunately seen today in the French state

Discourses on the right to wear a headscarf in public have resurfaced in France, as the past couple of months have seen people from all walks of life giving their opinions about the way Muslim women should dress. While young girls have been suspended from school for wearing long skirts, supposedly breaking the 2004 law banning ostentatious religious signs from state schools, Muslim women were denied treatment by their physicians for covering their hair. A member of the French cabinet compared women who wear headscarves to slaves, while blaming them for being militants of political Islam, and fashion retailers were boycotted for launching product lines specifically designed to cater to the sartorial needs of Muslim women.

Although the debate on Muslim women's so-called liberation has been going on for decades, it seems as if we Muslim women have not expressed ourselves enough. As astonishing as it may sound to those who have a perception of the female body that is rooted in sexualization, there are educated, sound-minded, independent women who freely choose to don a headscarf, whether as an expression of their faith, culture, solidarity or for any other reason.

Instead of condescendingly imposing their own perception of dignity and freedom, French politicians, educators, media figures and their like should consider that maybe not conforming to modern standards of beauty does feel dignified and liberating for Muslim women who choose to wear the hijab. As for the senseless assumption that these women are militants of political Islam dissimulating ideological messages, a headscarf is merely a personal expression of a woman's identity. The motivation behind it is neither to proselytize nor to suggest that women who do not wear one are immodest.

Interestingly enough, arguments against Islamic women's dress do not only evolve around a context of liberation and progressiveness. Rather, they quickly transform into a vindication to preserve secularism as an indispensable French ideal. But the pope said it best: "France exaggerates la

Ïcité" In a recent interview conducted by the French Catholic paper La Croix, Pope Francis maintained that everyone must have the freedom to externalize his or her own faith. "If a Muslim woman wishes to wear a veil, she must be able to do so. Similarly, if a Catholic wishes to wear a cross, people must be free to profess their faith at the heart of their own culture not merely at its margins" said Pope Francis.

A compelling study by William McCants and Christopher Meserole from the Brookings Institution tries to determine patterns of Sunni militancy by looking at available data on people from around the world who traveled to fight in Syria between 2011 and 2014. McCants and Meserole discovered that "four of the five countries with the highest rates of radicalization in the world are Francophone, including the top two in Europe." The Francophone variable, however, is understood to be a proxy for French political culture and its own strict interpretation of secularism as laicité.

In a recent article in which Meserole outlines the quantitative research methods used for the study, it is suggested that rigid secularist practices might be leading to the alienation of some Muslim communities, thus rendering them more vulnerable to radicalization. This is mostly apparent in Tunisia, Belgium and France, all of which are countries that have witnessed unending national debates on banning the Islamic headscarf or face veil from the public sphere, especially prior to the onset of the Syrian civil war. When a state seeks to ban headscarves or face veils, it forces Muslims to make a choice between their faith and their Western or secular national identity, Meserole says.

Although the results of the study are only preliminary, they represent a major step in showing just how important it is for Western societies to integrate Muslims to overcome radicalization and the threat of terrorism. The regulation of headscarves and constant demeaning of Muslim women do nothing but reinforce the exclusion of Muslim women from the public sphere and further obstruct their integration into society. If the way strict secularist principles are applied creates further polarization between communities, then this is the moment to reconsider the original aspirations behind the implementation of those principles. The road to modern democracy passes through a liberalism that is characterized by the universal and equal application of the law, but also, and more importantly, the supremacy of basic human rights over the rights of the state. A secularist approach that protects freedom of religion and religious pluralism must be adopted, rather than a form of lacité that is used as an alibi for Islamophobic sentiments.

It goes without saying that the discriminatory rhetoric used by many only leaves European Muslim women feeling marginalized and disenchanted in their own countries, thus playing into the hands of radicalization. Nevertheless, this is not the first time arguments of secularism and progressiveness are being used to stigmatize and pressure Muslim women. During the colonial period, the French military was inciting Algerian women to take off their headscarves by organizing "unveiling ceremonies" and publishing propaganda posters. One of those notices, edited by the French army, proclaimed to Muslim women: "Aren't you beautiful? Unveil yourself!" It is certainly worrying to see that this patronizing mindset, self-acclaiming the right to dictate the way Muslim women should dress, has not left some people since then.

So, unveiling myself? Non, merci.