Turkey's poker table etiquette is saving the EU from collapse for the moment. But for how long? 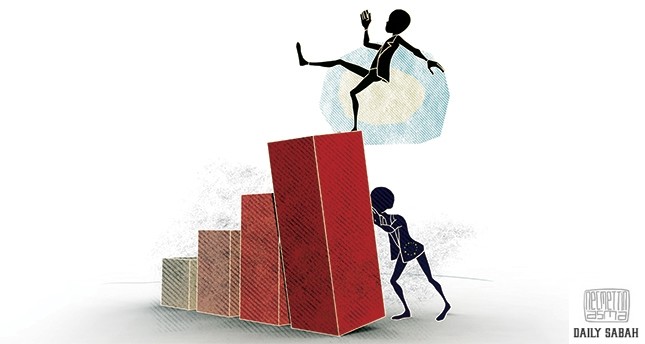 Illustration by Necmettin Asma - twitter.com/necmettinasma
by Martin Jay Jun 01, 2016 12:00 am

It's the role of the media - and why journalists should never be allowed to be activists - that is starting to show like a boil on the side of the neck. Turkey's flirtation with Brussels is based entirely on a lie cooked up by the EU's own ‘in-house' journalists. But when will it burst?

The EU's recent green light to Turkey on membership is full of plots that reveal once again the union's unethical barrier towards the rest. And so can Ankara only expect an affair based on little more than instant gratification and little else? When Turkey joins, can it expect the real deal?

Not really. In fact, it's more likely to be the stark opposite to luxury travel as Turkey might have to prepare itself for a rough ride. EU membership is rather like flying Ryanair. The moment you enter, you get hit with hidden charges and in the end, you don't even know where you'll end up.

OF COURSE, WE HAVE MORAL SENSE

Once again as Turkey flies even closer to the sun, with its established allies, those relationships are tested to the limits each day. And not only the EU tryst. America is also is a curious bedfellow who doesn't understand the rules of geopolitical sex at the best of times. Is the United States a real ally, many might be asking at this time, given its meddling in Syria, which was led to the PKK on Turkish soil having weapons that it could only dream of; and also Ankara's curious love affair with Brussels where both parties are locked in an embrace but both equally ready to write the "dear John" letter.

But Mr Erdoğan's gamble with the EU, by playing for bigger stakes at the table, is not only risky but will only lead to a contempt creeping into the relationship with Brussels. It's almost as though Ankara will only despise the euro-elite the moment they back down and fold their hand.

Brussels bringing Turkey closer to its dream for almost 17 years - the gem on its post-Ottoman crown - EU membership, is really just an illusion. The EU is taking Ankara for a ride and badly needs a distraction so as to show the public in Old Europe that even if the EU makes an apocalyptic mistake on its own turf, that it is only the EU that can be allowed to clean it up.

The immigration crisis that the EU allowed to ferment itself was born of a devious trick by Brussels on its own fee-paying members. The executive in Brussels has been bitterly complaining for years that it hasn't the powers it needs to really do anything to be a counterweight against both terrorism and refugee flows. Consequently it has not played a fair game with London, Paris and Berlin.

But if Brussels can cheat its own older members of the club, then wouldn't it do the same to a wannabee member? You betcha.

Is this another reason why Turkey is holding out on the EU? Does it know that the delusion of EU membership is a sort of lost underwater city, something only to dream about and which can never really every exist? Is Turkey's foreign minister ahead of the game and knows that any deals struck now will almost certainly be reneged on by future EU administrations - and that Brussels is desperate now to muster any credibility it can conjure up?

The plain truth is that journalists there need raw material to work with, to promote the euro-elite. And being seen to be nailing terrorism would be a shot in the arm for three guys in grey suits there who you're never going to remember the names of anyway.

But why would Turkey want to join an organization that constantly has to pay for airtime just to get media coverage and presides over an arrangement in Brussels with journalists that encourages them to comply with the rules of promoting the project? Why would Turkey want to be part of the EU when it fails time and time again to deliver anything for its own people? The EU, few remember, is a failed single market that unlike other trading blocs has almost no growth whatsoever and to merely survive has to constantly busy itself with over-regulating its own members and grabbing more power as a "decentralized" federalist wet dream superstate into the bargain. The biggest success story associated with the EU is not Germany - although this is, in reality, the only real winner of the weak-yet-controlled euro.

No, the real success story of the EU, is not even Ireland which is enjoying 7 percent growth at the moment after its last euro bailout.

In fact, it's Switzerland. This tiny country, Turkey should take note, which is not an EU member is the biggest success story of the EU as it has a boom economy thanks to being a trading partner of the EU but having none of the expense or regulatory headache that go with it.

As we approach June 23, where a vote in the U.K. could see the end of the EU as we know it, Brussels is dreaming of a new role, post-Brexit.

That's where Turkey comes in. If a deal on immigration is struck - as well as anti-terrorism - Turkey would effectively give Brussels a new lease of life, with a new sense of purpose. All future problems with this dossier would be the exclusivity of the EU, as they signed it off.

MEDIA, MEDIA, CAN YOU HEAR ME?

It's all about generating work for yourself, which is, in essence really what the EU is all about. But just watch the Brussels media machine in action and you begin to realize how dangerous it is when journalists cross the line and become "activists."

Recently we saw in Lebanon two ugly scenes of "hactivists" being caught up in their own tangled web of deceit and self fulfilment. An Australian TV crew along with their presenter were arrested as they took part in a child kidnapping, working hand in hand with the company employed to flee in a high speed boat with the child who was being held by a Lebanese father. It all went terribly wrong though when security forces intervened, leaving many to ask a broader question should journalists be so close to the story? Similarly, in a country where TV journalists actually boast on their Twitter bios of being a "journalist and an activist," a famous TV bimbo here made the headlines when she refused to hand over money she collected on behalf of a Syrian refugee who broke all our hearts a while back for selling pens in the streets of Beirut while carrying a child. "Pen dude" broke the internet when a hactivist made a story about him and raised money for him to start a bakery and support himself. But now the story of him being nasty to the "journalist" is becoming the real story as he wants the remaining amount of (his) money that she is now keeping, as she doesn't receive the grovelling reverence from him that she believes she deserves, poor thing. In Lebanon, journalism is such an abstract notion that few even understand that being an activist and a journalist at the same time is an absurdity.

Those committed to profiteering from being this repulsive hybrid, should understand that when they fall into the icy water, few will throw them a lifeline. Even those who roped them in, in the first place.