The US assisting and training a designated organization 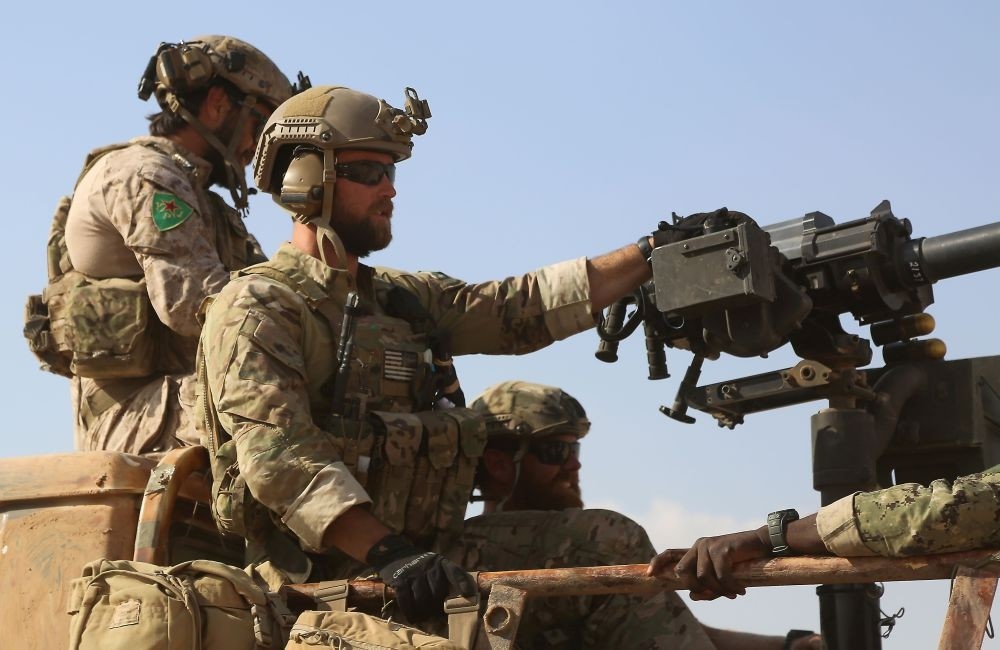 Armed U.S. special soldiers, wearing insignia resembling those of the Kurdish Peopleu2019s Protection Units (YPG), are riding in the back of a pickup truck in the village of Fatisah in the north Syrian province of Raqqa on May 25, 2016.
by Ali Murat Yel Jun 02, 2016 12:00 am

The U.S. could consider the Syrian armed terror groups as the best option to fight DAESH on the ground without sending its own troops to avoid casualties. Yet neighboring countries like Turkey expected it to also respect its concerning regarding the country's own territorial integrity

The U.S. Department of Defense changed a clause in the Berry Amendment of U.S. Code Title 10, Section 2533a last year (FR Doc. 2015-03857, 02/26/2015), prohibiting the "use of funds made available under the acts for the purchase or manufacture of a flag of the United States, unless such flag is manufactured in the United States." Defense Department spokesman Mark Wright called the new rule a "symbol of our national pride." The military is required to purchase American flags produced entirely in the U.S. from "the threads to the ink to the assembly." This amendment was seen as patriotic and was an emotional connection between American soldiers, especially those deployed abroad, and their country. Although soldiers themselves can buy cheap American flags produced outside the U.S. with their own money, the U.S. military needs to use only American-made flags in their military bases or war crafts. Flag producers also welcomed the idea as it would improve the economy of the country and create new jobs in the $300 million market each year. It was claimed that cheaper flags produced outside the U.S. were not up to their standards.

I WANT YOU FOR THE YPG ARMY

Since before the U.S.'s war on terror, every single American soldier at home or abroad wears the U.S. flag insignia on the right shoulder of their uniform. Yet some say this flag should be worn on the right shoulder to give the effect of the flag flying in the breeze as soldiers move forward. It is fairly understandable that a nation would be very proud of its flag and combat forces by insisting on the purchase of only American-made flags and all soldiers wearing a patch of their country's flag on their uniforms. However, it is simply not understandable why some members of the military should wear foreign military patches, especially in a combat zone. Since there are few regulations on military dress codes like the "Guide to the Wear and Appearance of Army Uniforms and Insignia" in the Department of Army,

Pamphlet 670-1, detailing and specifying every single inch of the uniforms, it is unthinkable for a few soldiers to wear patches of another army without permission from their superiors, be it their immediate superiors in the zone or even the higher echelons back in the U.S. For example, section 4-6 of the uniform guide strictly prohibits foreign patches on combat uniforms except those that had been awarded to the wearer by a foreign country, yet even in this case there must be at least one U.S. patch next to it. The official documents do not specify what kind of corrective or punitive action would be taken if one wears unauthorized foreign patches or any other insignia.

Still, we saw such a thing last week as photographs of some American special forces troops emerged in the media wearing patches resembling those from the Kurdish People's Protection Units (YPG) fighting DAESH alongside the Kurdish militia in Syria, but to no avail. Moreover, the patches worn by male soldiers belonged to the all-female Women's Protection Units (YPJ) of the YPG. The incident enraged the Turkish public and politicians and also some of the Arab components of the Syrian Democratic Forces (SDF), the entity struggling to clear Syria from the old regime of Bashar Assad. Whether it was just a big mistake or a deliberate choice made by the U.S. vis-a-vis the region's political stability is still unknown and incomprehensible to some regional actors.

On the one hand, Turkey views Kurdish demands for autonomy as a threat to its sovereignty and links the YPG to the PKK, which is a designated terrorist group that has engaged in an insurgency in the southeastern part of the country for decades. The U.S.'s solidarity with such a terrorist organization will eventually damage the bilateral relations between two NATO allies. Ankara expects the U.S. to support its struggle against Kurdish terrorist organizations in the country and across its borders as well as the fight against SAESH. The U.S. could consider the Syrian armed groups as the best option to fight DAESH on the ground without sending its own troops to avoid casualties. Yet neighboring countries like Turkey also expected it to respect their anxieties of regarding their territorial integrity. Favoring one group, in this case Kurds, in Syria could inflame local tensions and not do any good to restore peace in the region. The YPG is not the only representative of Syrian Kurds as there are many Kurdish groups who stay away from this terrorist group like the National Initiative for Syrian Kurds, the Kurdish National Council in Syria and the Kurdistan Regional Government's (KRG) peshmerga forces in Northern Iraq.

Therefore, the U.S. should pay attention to other ethnic and religious groups in the region and the best thing it could do is contribute to the establishment of a multicultural Syria and Iraq in a stable region with a pluralistic environment. Otherwise, if the YPG and its affiliated forces are continuously supported to the extent of establishing their supremacy in the region, any hope for peace could irrefutably fade away forever. Turkey, with its historical experience of the Ottoman "millet" system in which mixed-faith communities lived side-by-side in shared spaces amid religious pluralism, should take the lead in the affairs of the region.

As for the U.S., it needs to take more pride in its own flag and military insignias rather than meddling with patches that derive directly from the PKK, which I repeat, is a designated terrorist organization.

* Professor of anthropology in the Department of Radio, Television and Cinema at Marmara University
Last Update: Jun 02, 2016 2:02 am
RELATED TOPICS