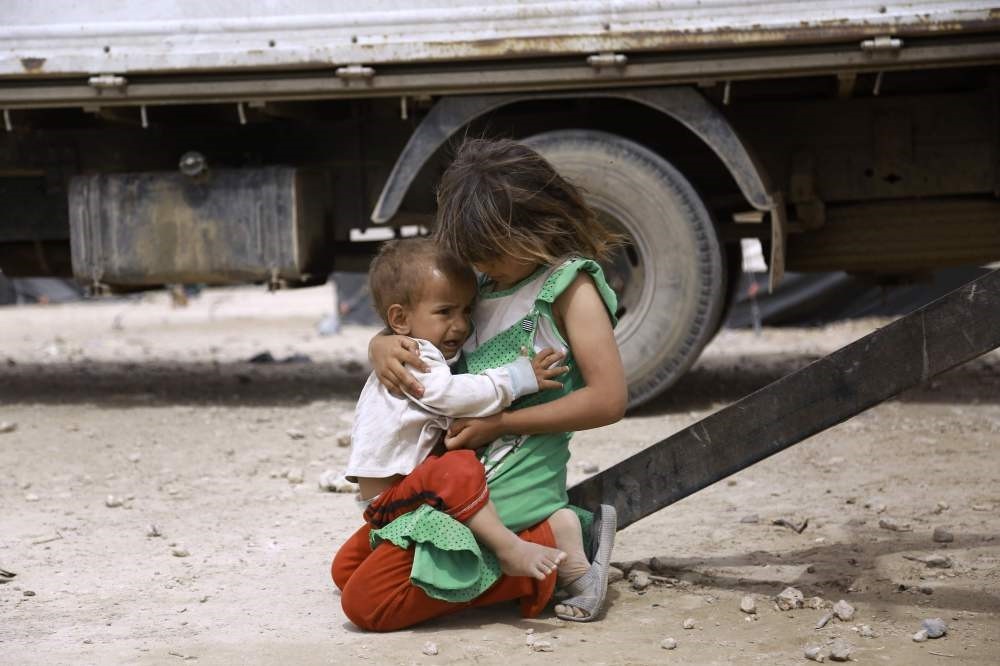 The world has been witnessing a heart-wrenching humanitarian tragedy since the civil war erupted five years ago in Syria. This tragedy has brought on one of the most significant mass migrations in the history of international migration. The war has caused more than 4.5 million people to leave their homes and a further 6.5 million people are internally displaced. As the war is about the complete its fifth year, the International Organization of Migration (IOM) recently said at least 1,475 Syrians have died trying to reach Europe by sea in the first couple of months in 2015. The IOM considered 2015 to be the deadliest year with 3,771 migrants and refugees having lost their lives trying to cross the Mediterranean to Europe.

Beyond any doubt, Turkey is by far the top witness to the humanitarian tragedy more than any other country receiving Syrian refugees. Most of the abovementioned deaths occurred in the Eastern Mediterranean between Turkey and Greece. Turkey deserves praise while giving a good account of itself in its handling of the migrant crisis with all socioeconomic aspects despite the fact that it does not have a history of tackling the mass movement of people from the Middle East inside its borders. There are estimated to be some 3 million Syrian living in Turkey - the approximate number of both registered and unregistered refugees combined. The Prime Ministry Disaster and Emergency Management Presidency (AFAD) has been sheltering over 300,000 Syrian refugees for more than four years. AFAD was established in 2009 to combat natural disasters, and it has pioneered building refugee camps across Turkey, of which there are now 27. AFAD provides an inclusive model to ameliorate the plight of Syrian refugees, including the provision of shelter, food, security, education, health, worship and social activities.

Turkey's case could possibly be regarded as one of the success stories dealing with Syrian refugees whereas Europe has fallen behind in handling the refugee crisis. As a matter of fact, EU member states have a deep-rooted history of dealing with refugees. For instance, they provided shelter and social services to millions of Europeans who fled violence and persecution during and after World War II, and more recently Central and Western Europe received a large influx of refugees during the Bosnia and Kosovo conflicts in the 1990s. Through the lenses of EU countries, the Syrian crisis is by far the largest one in the history of Europe that originated outside its region, but even if so, it is unfair to outsource the bitter recipe of the crisis to Syria's neighbors and take a backseat in the response to the human tragedy.

Turkey's position as a major actor in international migratory movements has long made it both a destination and a transit point for migrants from the Middle East since the 1980s. Serving as a bridge between the Middle East and Europe, east to west as well as south to north, Turkey has been home to waves of migrants and refugees. In addition, Turkey shares borders with countries that have lingering histories of political turmoil and ethno-sectarian divisions. Understanding the Turkish regulations on refugees is vital to understand Ankara's current immigration policy.

With the end of World War II, hundreds of thousands of refugees were living in makeshift camps. Due to this there appeared a need for an international refugee regime and so the 1951 Convention Related to the Status of Refugees was adopted. The convention particularizes who refugees are, their legal rights and the legal obligations of signatory states. The principle of non-refoulement, which prevents the forcible return of people to countries where they could be exposed to persecution, was included in the convention. Hoping that the refugee crisis could be settled in a short time, governments limited the scope of the convention for refugees coming from Europe and to events occurring before Jan. 1, 1951. During this period, Turkey signed the convention with both a geographical and a time period whereby only European refugees could be granted access to asylum procedures. In other words, Turkey would only give refugee status to individuals who escaped communist persecution in Eastern Europe and the Soviet Union. The 1951 convention was ratified and redesigned by the 1967 Protocol Relating to the Status of Refugees, which caused all signatories of the convention to remove their reservations on the definition of refugees. Turkey, however, lifted the time but did not remove its geographical reservations that excluded non-Europeans from recognition as refugees. Even though Turkish authorities were coping with a manageable flow of conventional refugees, the situation began to change at the end of the 1980s when a growing number of Iranians began to seek asylum. Turkey started turning into a transit country of irregular migrants and asylum-seekers from the Middle East, Asia and Africa. Turkey has become a buffer zone to hamper refugees and illegal migrants from reaching Europe.

The complex and ever-shifting dynamics of migration flows led to the 1994 Asylum Regulation. Adaptation of the 1994 regulation brought two different definitions for the categorization of refugees. These definitions include "conventional" refugees, who fled Eastern Europe and the Soviet Union during the Cold War, and "non-conventional" refugees, who fled the Middle East. According to researchers, until the designation of the 1994 regulation, Turkish national law had no provision governing the status of asylum seekers and refugees from outside Europe. In brief, the 1994 regulation could be regarded as an outstanding achievement in the regularization of the status of asylum seekers particularly those from the Middle East. In other words, it is a radical break from the past regularization about non-conventional refugees.The Syrian refugee crisis erupted as the Turkish government was about to overhaul its immigration provisions to meet international standards in order to comply with relevant EU legislation. Only two years after the turmoil in Syria began, Turkey adopted a long-awaited asylum law, Law No. 6458 on Foreigners and International Protection, which regulates non-fefoulement, foreigners, international protection and the Directorate General of Migration Management, on April 4, 2013. The law is considered the first to regulate protection requirements for refugees seeking asylum, but it is still not sufficient enough to evaluate refugee status applications from those outside Europe. The law is criticized for falling short of lifting geographical reservations, and therefore, asylum applications from outside European countries are given "conditional refugee status." Notwithstanding the fact that the law still has some shortcomings and gaps, the U.N. refugee agency (UNHCR) championed the drafting process and welcomed the law as a remarkable achievement for international protection and the EU called it a "clear commitment to build an effective migration management system in harmony with EU and international standards."

The EU's asylum and migration strategy has long being criticized and called "Fortress Europe," which references the fortification of borders and erection of walls to block migrants from penetrating European countries. Even though the EU criticizes the shortcomings of Turkey's immigration law and policy, it is not ready to embrace Syrian refugees like Turkey has in such a short amount of time. EU countries are showing their elusive face in the Syria refugee crisis and implementing a wide perception management campaign to make it look as if they really care for Syrian refugees living in periphery countries such as Turkey. According to the fact sheet launched recently by the European Commission, the number of refugees registered or awaiting registration was sorted according to number and country: 1) Turkey: Over 3 million; 2) Lebanon: 1,048,275; 3) Jordan: over 636,482; 4) Iraq: 245.022. Compared to the over $8 million of aid mobilized by Turkey alone in recent years, the mobilization of 5 million euros, beyond any doubt, is just a symbolic amount for EU member states. While countries bordering Syria are faced with a whole bunch of socioeconomic challenges to tackle in the crises, EU member states aim to limit the numbers of migrants traveling across the Aegean from Turkey to the Greek islands and further into the EU as a final destination point. In order to prevent unchecked arrivals to the EU, the Readmission Agreement took effect as of March 20, 2016. Within the scope of the agreement, Greece is able to send back new irregular migrants who arrived after March 20 to Turkey. In lieu of visa-free travel for some of its citizens and 6 billion euros in refugee aid, Turkey was convinced to take back migrants who had left Turkey to Greece to prevent the uncontrolled flow of migration to the EU. Nevertheless, according to many refugee and human rights organizations, the EU-Turkey refugee deal is full of paradoxes on the basis of potential violations of EU law such as detention and right to appeal. Individuals who are not qualified for asylum are considered irregular migrants and they are eligible to return to Turkey under the agreement provisions. In exchange for migrants sent back to Turkey, EU countries will receive an equal number of asylum in a one-for-one model.

Even though Brussels is overoptimistic about the possible implications of the agreement, things are not simple, as the agreement stipulates how the assessment phase will proceed without undermining the respect for regular and irregular migrants, refugees and asylum seekers' rights. One of the most hotly debated issues is over unjust accusations that Turkey is eager to keep qualified Syrian refugees while sending sick and illiterate ones to Europe. The vital point is that Turkey already has more than 3 million Syrian refugees and almost 80 percent of them are either barely literate or illiterate, which means an inconsiderable number of Syrian refugees are qualified. Having expressed deep concern over the qualifications of Syrians who EU countries will take in is a rather unfair issue because Turkey was appointed to select refugees permitted to leave the country and re-settle in the EU under the Readmission Agreement. In addition, European countries have received qualified Syrian refugees such as well-trained engineers, doctors and other professionals who could successfully integrate into European societies so far. Moreover, European media has launched a comprehensive campaign that the EU-Turkey deal to de-escalate the migrant crisis is on the verge of collapsing, in reference to the uncharted nature of the agreement. Many commentators stress the EU's strictly framed conditions of the agreement, which include issuing biometric passports, combatting corruption and narrowing anti-terrorism law. The media in the West is even meddling in Turkey's internal affairs, speaking up for the human rights of PKK members and criticizing the government for lifting the immunity of members of Parliament who are accused of peddling PKK propaganda. Finally, visa-free travel, the most important bargaining chip, is also criticized in case Turkey lets refugees through to Europe as a boomerang effect.

Under the Readmission Agreement, as authorities have said, approximately 400 migrants have been send back to Turkey from Greece, but in exchange for those 400 migrants, only 177 refugees have been sent to Europe from Turkey. Reportedly, 8,500 migrants are still waiting in Greece for a fair assessment process to be completed. It seems that it will take time for both the Turkish and Greece system to speed up the evaluation process to determine who is an irregular migrant, who should be returned to Tukey and who can be sent to Europe. Even though a strong backlash occurred, primarily concerning significantly back stepping from EU values and international asylum law, according to authorities, arrivals have slowed since the agreement came into force. Taking into consideration the current backlog of asylum requests both in Greece and Turkey, the agreement should proceed to stop human smugglers on the Mediterranean. However, even though the main focus of the agreement is to destroy smuggler routes to eliminate human smuggling, which is a grave violation of human rights, the EU continues to close its borders and erect fences to prevent mass influx of migrants in striking contrast with refugee rights and superior European values. The EU's elusive face in combatting irregular migration clearly reveals blatant hypocrisy in its response to the refugee crisis.